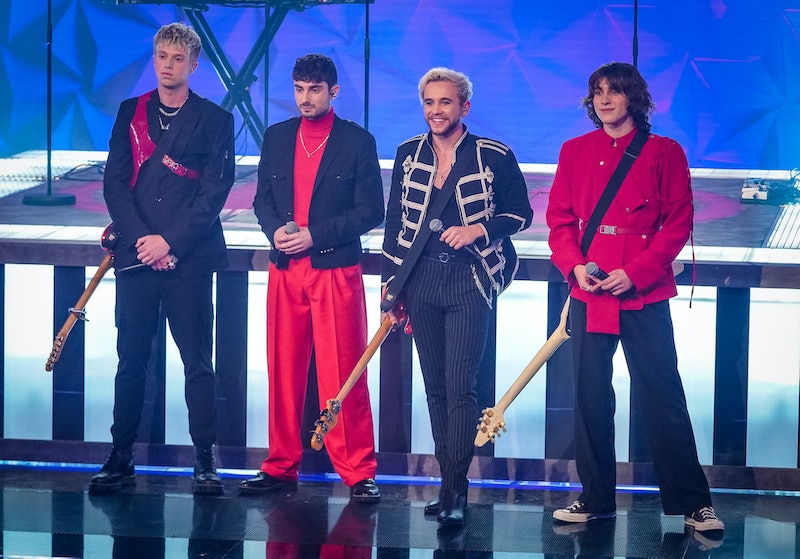 After weeks of sing-offs and performance battles, the winners of BBC One's talent competition Little Mix: The Search were finally announced on Saturday's finale episode (Nov.7). Four chosen bands — Melladaze, YChange, Since September, and Nostalia — battled it out on the main stage before the public cast their votes. Talented four-piece Since September won the title after pulling out all the stops for their final performance, yet who are Since September the band who join Little Mix on their 2021 UK tour?

Made up of Matthew, Harry, Jacob, and Patrick, Since September was put together following the 'vocal and instrument' group auditions. And, while they didn't know each other beforehand, it's clear the guys have some serious musical chemistry. With all members able to play an instrument, Since September became favourites throughout the competition, with Little Mix's Perrie claiming she'd "fight" for the boys to stay on the show during the semi-finals.

Young, multi-talented, and with very stylish haircuts, signs say Since September could have a great career following the competition. On the show, they were mentored by the McFly so it's looking good for the fresh new boyband.

The group boasts 22-year-old Harry from Coventry, who has been playing various gigs including the Isle of Wight Festival from a young age. According to BBC, Harry is influenced by 5 SOS, McFly, Jonas Brothers, Kings Of Leon, The Killers.

On the keys, you've got Nottingham-born student Jacob who counts his dad as his biggest inspiration. Speaking to BBC One, 20-year-old Jacob detailed the support Little Mix gave the band throughout the show.

“Yeah, they have been so supportive throughout the whole process," he said. "They were on the phone the other day and said if we ever need anything, we can go straight to them — you wouldn’t get many celebs saying that.”

20-year-old Patrick from Burnley was studying Politics and German at University before he set for fame and stardom on Little Mix: The Search. Per BBC, when he's not playing his guitar, he can be found playing and coaching hockey.

Irish Singer-Songwriter Matthew has strong support in his home country, even selling out a show in Dublin last year. He told the BBC how the band managed to bond over the lockdown earlier in the competition. "I’m glad to say we have definitely built a lovely relationship over lockdown and in some case it was a blessing in disguise as now we’ve bonded 10 times more than we might have been able to if we jumped straight into the lives," said Matthew.

Since September will join Little Mix on their Confetti UK tour next year. Following Since September's win, Little Mix tweeted the band congrats saying: "Huge congratulations to Since September! We can't wait to tour with you! Also a massive thank you to all the bands who took part..."

More like this
Yes, 'The Price Of Glee' Is Available To Watch In The UK
By Catharina Cheung
'Love Island' Has Added Yet Another Bombshell To The Villa
By Bustle UK
Joey Essex Is Rumoured To Be Dating A 'Love Island' Favourite
By Sam Ramsden
Twitter Has Renamed Ekin-Su After *That* 'Dancing On Ice' Performance
By Sophie McEvoy
Get The Very Best Of Bustle/UK
Sign up for Bustle UK's twice-weekly newsletter, featuring the latest must-watch TV, moving personal stories, and expert advice on the hottest viral buys.