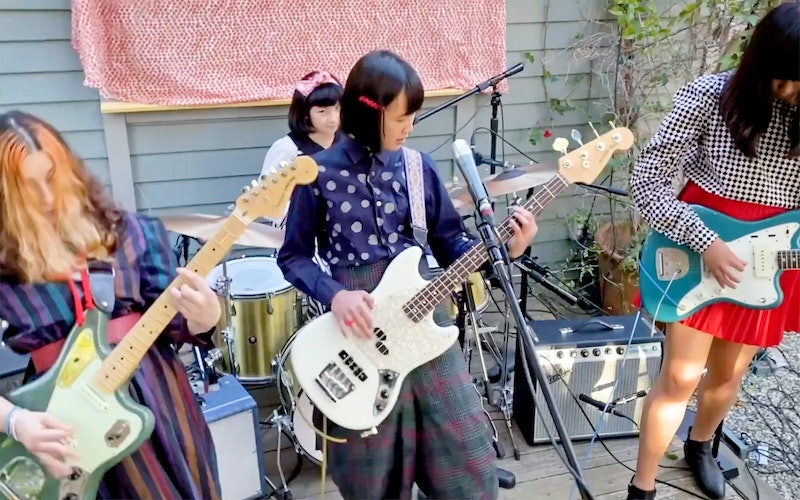 Get ready world, because The Linda Lindas are coming for you! The teen punk band went viral this week after performing their original song “Racist, Sexist Boy” at the Los Angeles Public Library. Now, they’re making headlines again — this time for inking a deal with Epitaph Records, adding their names to the 50-year-old label’s roster of punk rock musicians.

So, who are The Linda Lindas? According to the band’s Facebook page, Bela, Lucia, Eloise, and Mila are “Half Asian / Half Latinx. Sisters, cousins and friends who play music together because it’s fun!!” They may have just recently caught the attention of the internet, but the foursome, who are all between the ages of 10 and 16, have been performing since 2018.

The band got their start playing covers and opening for bands like Best Coast and veteran punks Bikini Kill, according to Variety. They’re already following in the footsteps of those performers, transmuting their frustration into punk rock ballads. Their latest song was based on a harrowing experience lead singer Mila had in school.

In the viral video performance, which has been streamed more than 250,000 times on YouTube, Mila shares, “A little while before we went into lockdown, a boy came up to me in my class and said that his dad told him to stay away from Chinese people. After I told him that I was Chinese, he backed away from me. Eloise and I wrote this song based on that experience.”

Though the young girls seem more than capable of “making it” in their own right, they also have some pretty close ties to the punk side of the entertainment industry. Variety reported that Mila’s dad is Grammy-winning producer-engineer Carlos de la Garza, noted for working with rock bands like Paramore, Cherry Glazerr, and Best Coast. He has also worked with the founder of Epitaph, Brett Gurewitz, known best as the lead guitarist of the trailblazing punk rock band Bad Religion.

The concert, which was part of AAPI Heritage Month, shows off the breadth of the band’s performance chops, including an original song they wrote for the Netflix documentary The Claudia Kishi Club and covers of Bikini Kill’s “Rebel Girl” and Muffs’ “Big Mouth.”

The band has also gotten attention and co-signs from some biggest names in rock, with Sonic Youth’s Thurston Moore sharing on Instagram, “Racist, Sexist Boy by the Linda Lindas. Song of 2021 so far…by far!” and Rage Against the Machine’s Tom Morello tweeting that the volatile track was the “Song of the day!”

With the band going viral and signing a record deal before even finishing high school, we see big things in the future for The Linda Lindas, so watch out to anyone trying to get in their way!

More like this
Twitter Is Having A Meltdown Over Buying Beyoncé Renaissance Tour Tickets
By Jake Viswanath
The Beyhive Is Mad At Harry Styles After Beyoncé’s Album Of The Year Snub
By Jake Viswanath
Beyoncé Has Officially Won The Most Grammys Ever & Twitter Is Losing It
By Jake Viswanath
Jameela Jamil Defends Sam Smith After Trolls Body-Shamed Them
By Jake Viswanath
Get Even More From Bustle — Sign Up For The Newsletter
From hair trends to relationship advice, our daily newsletter has everything you need to sound like a person who’s on TikTok, even if you aren’t.