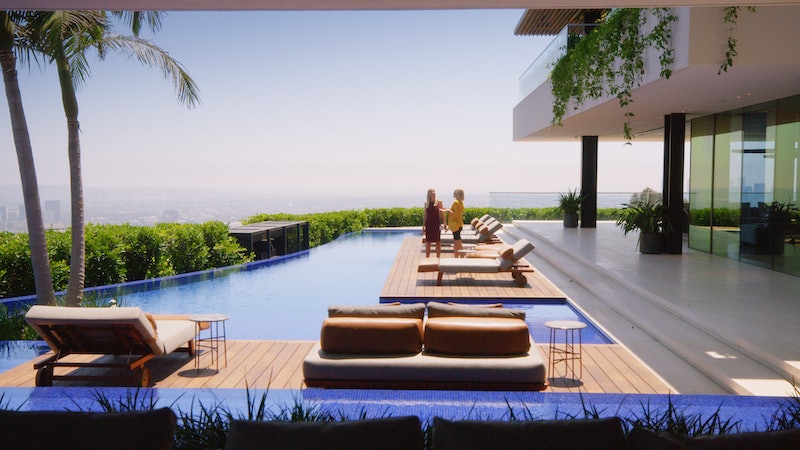 Of all the lavish properties on Netflix's Selling Sunset, the $40 million house is inarguably the Oppenheims' biggest get. It was first introduced in Season 1 while still under construction, on the market for $43.9 million in Season 2, and finally sold in Season 3. Now, the burning question is who bought the house, and what are they doing with all four of those hot tubs?

While speaking to Metro UK in June, Jason Oppenheim declined to disclose exactly who the buyers were except to say that they were "a very wealthy" and "impressive" young couple. However, Variety reported in December 2019 that said couple is Tom and Lisa Bilyeu, co-founders of the food company Quest nutrition. (Bustle reached out to the Oppenheim Group for confirmation but did not hear back.)

According to Forbes, Quest grew a staggering 57,000% in its first three years, earning a billion-dollar valuation ranking as the No. 2 fastest-growing company in North America by Inc. Magazine in 2014. Tom and Lisa also both host their own YouTube channels (Lisa's under the brand "Women of Impact") and co-founded Impact Theory Media Studios, which creates comics, graphic novels, books, television, film, interview talk shows, and more. "After the success of Quest Nutrition, I could have bought an island and retired, but that’s not the game I want to play," Tom wrote on the site. "I believe that life is about the acquisition of skills and putting those skills to the test in service of something bigger than oneself."

Neither Tom nor Lisa announced a move on social media, but a luxurious home resembling the one on Selling Sunset can be seen in the background of multiple Instagram photos, especially those on Lisa's account. Prominent details like outdoor wooden rafters and precise pool hedging clearly match up to the original listing. Hope they're enjoying that 163-foot infinity pool in quarantine!!!