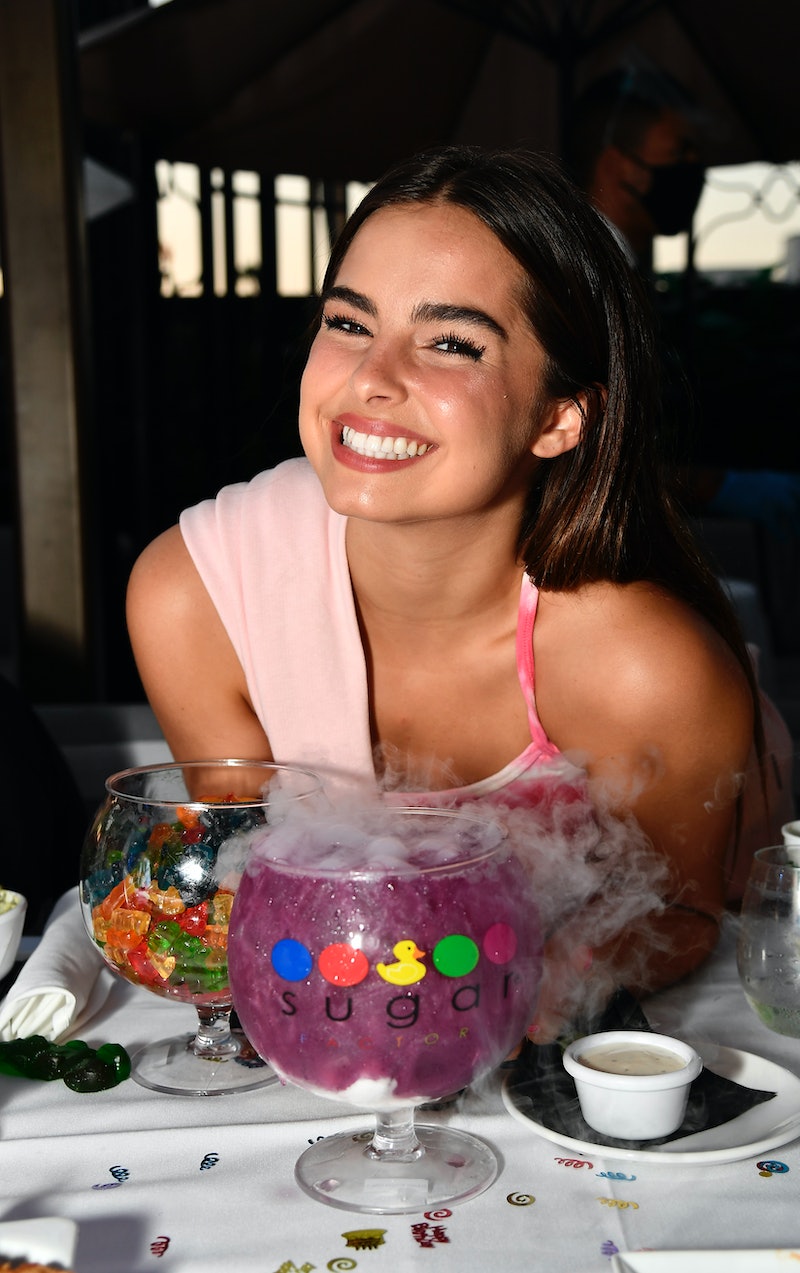 TikTok sensation, singer, and now He’s All That actor Addison Rae has been in the public eye since 2019, and fans have wanted to know every last detail of the 20-year-old star’s private life. “It was hard to adjust to the thought of people being interested in that,” she told Hailey Beiber of her dramatic relationship with fellow influencer Bryce Hall in a May Who’s In My Bathroom? episode. The experience taught her to “keep your circle small, keep your fights private, keep intimate things private, and respect each other,” she added. After the long, angst-filled saga with Hall, she’s since moved on to what looks like a more private relationship with songwriter Omer Fedi. Of course, there continues to be speculation about her love life, so what do we know about who Rae’s dating?

Who Is Addison Rae Dating Now?

On Aug. 12, paparazzi shots showed Rae kissing producer and musician Omer Fedi — most well-known for being a guitarist for Machine Gun Kelly — outside of a restaurant. Previously, she was spotted at an MGK concert in June, which is when rumors of their relationship began. Neither Rae nor Fedi has confirmed a relationship, although Fedi did comment on Rae’s Aug. 4 Instagram post, saying, “I’m in love with you.” On another post, Sheri Nicole, Rae’s mother, commented that Fedi is “truly a wonderful amazing person and he makes her soul shine. Love him.”

Fedi, a 21-year-old Israeli who hails from Tel Aviv, is Grammy-nominated and signed with Universal Music Publishing Group in 2020. He has also produced well-known songs like “Montero (Call Me By Your Name)” by Lil Nas X and co-written and co-produced The Kid Laroi’s “Without You.”

Variety called him a “secret weapon” of songwriting. He and his family moved to Los Angeles five years ago (much like Rae) to give him a better chance at success. He’s known for taking an atypical path to make a name for himself, working directly with his friends and new artists before they hit the mainstream. “I’m more of a behind-the-scenes guy, and I’m not even close to reaching my [songwriting] goals,” he said in the magazine’s April feature.

When Did Rae Date Bryce Hall?

If you’re at all familiar with Rae’s dating history, it’s probably her drama-filled relationship with her TikToker/YouTuber ex, Bryce Hall, that sticks out. The two first met at a party in 2019 and spoke about their relationship in a YouTube video in November 2020. They dated for “three days” sometime in 2019, started dating again in October 2020, and then split again for good in March 2021 after Hall was accused of cheating with adult film actor Dana Wolf in Vegas and/or model Josie Canseco. He posted a video denying the Vegas allegations and saying that he and Rae were dealing with a “sh*t-ton” of things off camera.

He later elaborated, saying that he ended the relationship, that Rae believed he cheated at the time, and that the “trust wasn’t there.” Hall added that he had to get lawyers involved to clear up the cheating rumor, which he said was part of a $75,000 extortion attempt. He also said he’d been dating since the Rae split but that he and Canseco were friends and just “vibing.” At the time, he laughed, “[Rae and I] talk occasionally ... like, every day.” At the time, Rae tweeted to simply say she was handling things “offline.” Still, she did share that he inspired her song “Obsessed.”

Who Did Addison Rae Date Before Omer Fedi?

There was speculation that Rae was dating TikToker Troy Zarba in September 2020 (in between the two times she dated Hall). Hall (perhaps shadily) tweeted support, saying, “addison can do whatever she wants as fast as she wants,” but Rae tweeted seemingly to establish that she and Zarba were just friends.

It was also rumored that Rae might be with rapper Jack Harlow after being spotted with him in April 2021. At the time, Hall again took to Twitter to post cryptic tweets, writing, “I’m about to explode man,” “F*cking me, telling me u love me then sneaking around w/ someone else ... that f*ckin hurts,” and “I feel like such an idiot.” Rae tweeted simply, “I’m single.”

There was a momentary rumor that Rae was dating Tanner Buchanan, her He’s All That co-star, because they kissed at the MTV Movie Awards, but there was no evidence that it was anything other than a stunt to promote the movie. Hall tweeted, “sucks, but moving on.”

Hall did not comment on the Rae-Fedi dating rumors beyond saying he’s “happy” for them but added (semi-jokingly) that being in a public relationship, “you’re always going to be reminded of your ex.” He did recently retweet photos of his birthday celebration, complete with Canseco and strippers, so make of that what you will.

Prior to dating Hall, Rae was in a five-year relationship — with whom, we don’t know, but Hall mentioned it in the 2020 YouTube video. As for now, she’s leaving it all behind, and it looks like Fedi is right there with her.