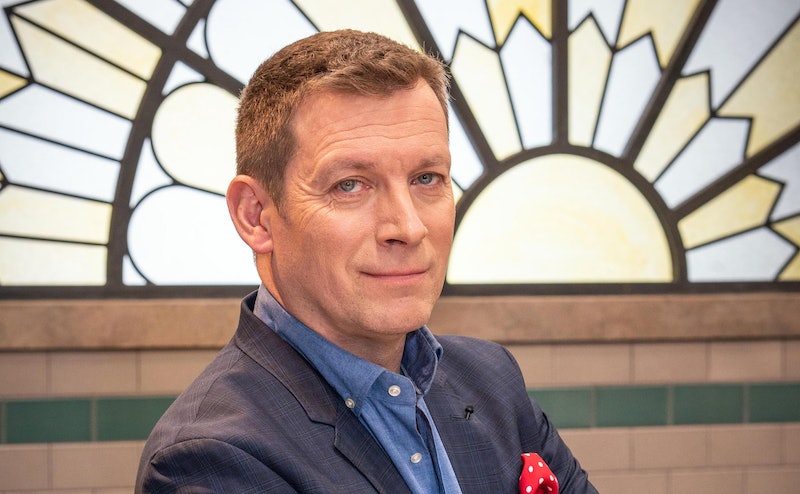 Bake Off: The Professionals’ new series is well under way, and has been tiding us over until the next series of actual Bake Off arrives (which may not even be this year, due to the coronavirus pandemic). The show, which sees pairs of professional chefs go head to head in expert challenges, also features some top judges, revered in the food industry for their own individual reasons. Along with pastry chef Cherish Finden, Benoit Blin has also appearing as a judge on Bake Off: The Professionals since it began. But who is Benoit Blin, and what has he done in his career that led to him earning a place as a judge on the hit spin-off show?

Like Finden, Blin is also a pastry chef, and one who is highly revered in the food industry. Currently, he is the Chef Patissier at Raymond Blanc's two-Michelin-starred Le Manoir aux Quat'Saisons, which is the highest role in the dessert kitchen. He has had this job for 20 years now, making him one of the most well known faces in the industry.

Prior to Le Manoir aux Quat'Saisons, Blin worked in his native France at none other than The Ritz. He landed the role of Senior Pastry Sous Chef at the Ritz Paris in 1991. Before that, Blin had a number of apprenticeships in a small town in Normandy, which allowed him to gain the relevant experience and expertise to be appointed this prestigious role.

Impressively, the pastry chef has won a bunch of competitions over his career, including the Pastry Chef of the Year in 2009. In 2005, he was also awarded the title of MCA (the Master of Culinary Arts), which is the highest accolade in his industry and is only ever given out every four years. Woah.

Revealing why he chose his job, the baker explained:

"I decided I wanted to be a patisserie chef and after having tasted a financier at an afternoon tea with an aunt, which I loved and I thought yes, this is what I want to do." He continued:

"I loved the smell of the bakeries and that has stayed with me. In the holidays, my father would drive me at 4 a.m. to the bakery to work. Both my parents have supported me in my love for baking."

While Blin was a judge on Bake Off: The Professionals' predecessor Creme De La Creme, he has also found himself on the judging panel for a number of prestigious awards, including the UK Pastry Open, UK and European Sugar Championships, National Chef of the Year, British Culinary Federation Chef Competition and the Master of Culinary Arts Finals.

Despite his experience, it sounds as though Blin didn't expect to be on a TV show such as Bake Off: The Professionals. Speaking ahead of the 2018 series, he revealed he "never" thought he would be a judge, explaining:

"I always take my job seriously as a patisserie chef, and I do it for the love of it, even though it can be tough sometimes. To be able to spotlight that now is great because I can help bring the world of patisserie to more people and a wider audience."

However, the chef certainly has made an impact during his stint on the show. In fact, in 2018, viewers branded him “brutal” for his comments during one show, in which he said a contestant’s creation needed “more drama.”