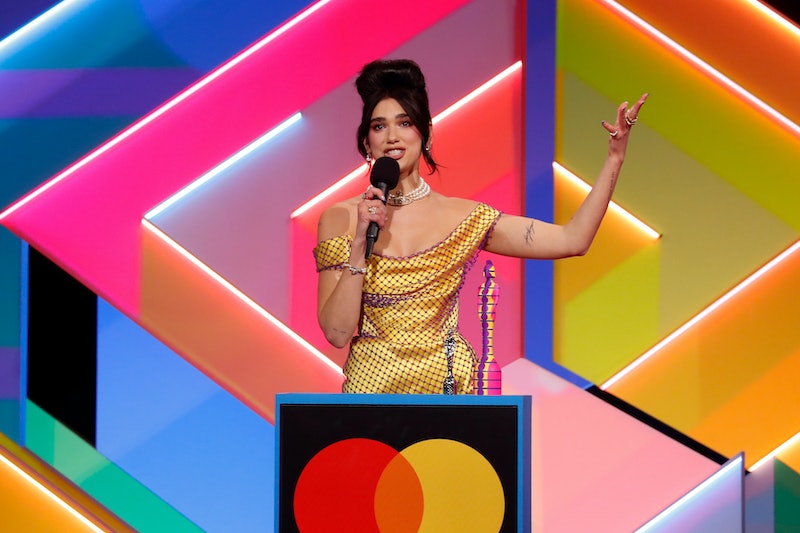 JMEnternational / Contributor/Getty
By Sophie McEvoy
May 11, 2021

At this year’s BRITs, winners were given a secondary award to give to “someone they consider worthy” as an “act of kindness”. When Dua Lipa won her first BRIT award of the evening, she dedicated the additional statue to Dame Elizabeth Anionwu. “She has spent her stellar nursing career fighting racial injustice,” Lipa said. “She has also spent so much time and is a strong, strong advocate for protecting frontline workers”. But who is Elizabeth Anionwu?

Born in Birmingham in 1947, Anionwu began her career as a nurse at the age of 16. Along with Dr Misha Brozovic, Anionwu founded the UK’s first Sickle Cell and Thalassaemia Screening and Counselling Centre in 1979. “I had not been taught anything about the condition. That left me absolutely fuming and embarrassed that I could not help” the families she visited as a health visitor, she told Pride of Britain.

“That is when I first realised things had to change, and made it my mission to raise the profile of this disease. I was quite an activist. There was such a thirst for knowledge that we were busy right from the start,” she explained. “People from diverse cultures are not always valued and still sometimes just seen as problems.”

In 1998 Anionwu also founded the Mary Seacole Centre, named after the British-Jamaican nurse who established the British Hotel during the Crimean war, to challenge the “predominately white, Eurocentric focus of nursing recruitment, education and research,” Anionwu told the Guardian. The Mary Seacole Centre focus on education about diseases like sickle cell, as well as increasing the number of nurses from ethnic minority backgrounds.

And as Lipa explained during her speech, Anionwu has also championed a significant pay rise for NHS workers following the pandemic. “She has also said that there’s a massive disparity between gratitude and respect for frontline workers because it’s very good to clap for them but we need to pay them,” the singer said.

Anionwu told the Guardian, “When COVID broke in March and was hitting us badly, money was quite rightly found for equipment and increases to hospital capacity. But if the government could borrow for those things, why can’t it borrow for nurses and midwives now?”

More like this
The UK Abortion Laws In 2022, Explained
By Sophie McEvoy
Where Is Oscar Torres In 'Only Murders In The Building' Season 2?
By El Hunt
Michelle Keegan Is About To Have Her Very Own 'Bridgerton' Moment
By El Hunt
Ryan Gosling Is Officially Ncuti Gatwa's Biggest Fan
By Maxine Harrison
Get The Very Best Of Bustle/UK