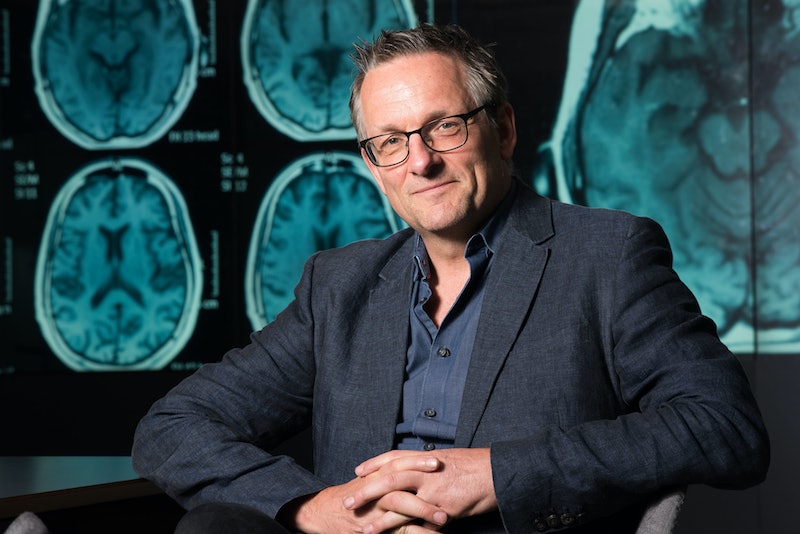 Here's an intriguing watch for science lovers. New BBC series The Diagnosis Detectives will take on real medical mysteries that have left doctors baffled for years, and attempt to solve them. (Basically like American drama House, but IRL and without Hugh Laurie.) Whether its a life-threatening skin disease or extreme weight-loss, medical experts will attempt to crack the complicated cases. The four-part series features twelve of the UK’s leading medical experts from "different fields" who will work to help change lives, but who is The Diagnosis Detectives host Michael Mosley?

Michael Mosley studied medicine in London and qualified as a doctor, but "has been working as a documentary maker and an award-winning science journalist" for the last 25 years, as per BBC. Mosley is no stranger to BBC health programming — in fact, he's been called the "master of TV science documentaries" before, and not without reason.

He's fronted a number of the broadcaster's investigative docs, including Trust Me I'm A Doctor and BBC TWO's Should I Eat Meat, and E-cigarettes: Miracle Or Menace? He's also one of the presenters behind BBC Two's The Great British Intelligence Test, alongside Dr Hannah Fry, which puts the nation's intelligence to the test. He's also a regular presenter on The One Show.

"His programmes have won an RTS, an EMMY and he was named ‘medical journalist of the year’ by the British Medical Association for a ground-breaking programme on Helicobacter pylori," says the BBC.

While he may seem familiar from his on-screen appearances, it is his books he is most famous for. He devised the 5:2 intermittent fasting diet and his Mediterranean-based Fast 800 Diet, as well as The Clever Guts Diet, The Fast Diet, Fast Exercise, and The 8-Week Blood Sugar Diet; all of which are international bestsellers.

Prior to finding fame in the dieting and health world, Mosley pursued a number of different careers, too. After studying Philosophy, Politics, and Economics at Oxford University, he went on to be an investment banker and later re-trained as a doctor — you know, all those easy-to-achieve jobs. He’s also married to GP and fellow health journalist Dr Clare Bailey.

The Diagnosis Detectives is available to watch on BBC iPlayer now

More like this
You’ve Got 'Love Island’s Farmer Will All Wrong
By Jack Orenstein
This Pre-'Love Island' Video Of Olivia & Zara Together Changes Everything
By Bustle UK
Is Winter 'Love Island' Flying Too Close To The Sun?
By Jason Okundaye
Twitter Can’t Make Up Its Mind About Ekin-Su’s 'Dancing On Ice' Skate-Off
By Sophie McEvoy
Get The Very Best Of Bustle/UK
Sign up for Bustle UK's twice-weekly newsletter, featuring the latest must-watch TV, moving personal stories, and expert advice on the hottest viral buys.