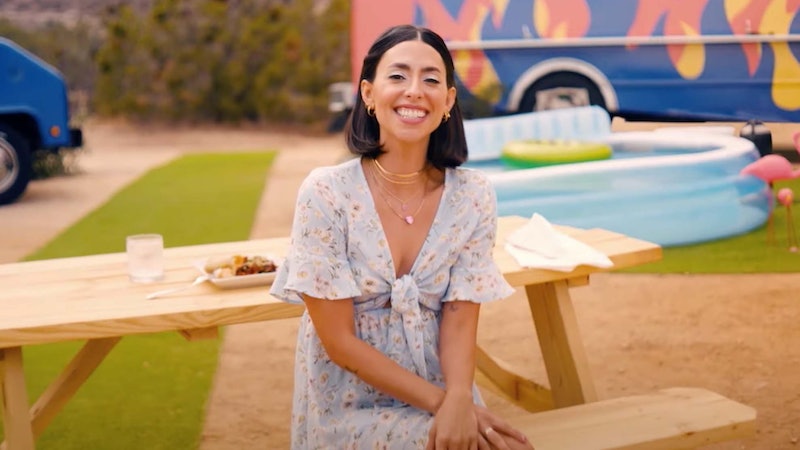 Finally, a show Megan Thee Stallion can be proud of. Hulu’s Hotties is a reality dating series that combines two of life’s greatest indulgences: flirtation and eating. The premise of the show, which streams on August 16, is simple. Each episode pairs off four rotating singles in a competition to see who can make the most delectable meals as a couple, all while they explore if they might have some chemistry outside the kitchen.

The contestants can win the best plate, best date, or both, but it won’t be easy, thanks to the show’s sizzling twist. Each of the cooking challenges includes consuming some of the spiciest food concoctions. “Who puts hot sauce on a popsicle?” one contestant asks in the trailer. While Jade Catta-Pretta may not be the mastermind behind the heat, she seems to be enjoying herself as the host of Hotties.

She opened up about Hotties in an interview with Mashed, where she advertised the show as full-on debauchery. “We are giving these contestants heat challenges, and they have to complete these heat challenges in order to keep cooking,” she started. “If they win, they win a second date that's $2,500 or they could take the money and walk away. It's pretty funny. You've got to hang on and see what happens at the end, because it shocked me, even, I have to say, and I'm not easily shocked.” Catta-Preta enjoys softly mocking the contestants whose mouths have been ignited by their food, but there’s more to the snarky host, who is also a comedian and actor.

Catta-Preta’s Twitter is full of promotional material for Hotties, stand-up clips, and other behind-the-scenes tidbits from her comedy sets. Her TikTok is more of the same, full of more clips of her doing stand-up or some zanier footage of her poking fun at The Real Housewives. It should come as no shock that her Instagram feed also includes more stand-up, but her comedy clips are scattered amongst tributes to her dog Cheryl, photoshoot candids, and more glitzy photo spreads. Of course, there’s also room for some Hotties promotion as well.

If pure stand-up is your style, there are plenty of Youtube clips showcasing Catta-Preta’s stylings on threesomes, odd names, and the general horrors of dating. There’s also her Youtube channel, Jaded, which features episodes of her podcast that goes by the same name. The content is very similar to her comedy style, musing on various topics, from ocean danger to misogyny.

The comedian’s filmography dates back to 2004, but Catta-Preta’s first prominent appearances were in the 2010s with minor roles on 2 Broke Girls and The Office. She landed a six-episode run on Californication in 2014. Later that year, she was one of the main cast members of the short-lived rom-com series Manhattan Love Story. She recently had a recurring role on Hulu and Disney+’s American Housewife, which wrapped up its fifth and final season in 2021. Her website bio includes a deeper rundown of her credit list, including appearances on Girl Code, Punk’d, and Life In Pieces.

In 2020, the Brazilian-born actor became the host of the long-running program The Soup, taking over a revamped version of the show that ended in 2015. “I think it’s just a different time and different people want to relate to the show,” she said in a 2020 interview with Entertainment Weekly. “For a long time, before I did stand up, I would go to these comedy shows, and every joke was putting down women and I would heckle. And so I just hope to bring in people that never felt like they had had a voice.”

When asked if she felt she was the right choice to take over for the show’s previous host, Joel McHale (Community), she seemed to feel right at home. “I’m not only a TV addict — I love talking about this stuff,” she started. “This is what I’m doing, regardless if I’m on the show or not, but also just bringing in every aspect of things that I’ve practiced over time. I get to tell jokes, I get to act, and I get to host all at the same time.”

She said, during her hosting duties on Hotties, she saw many fun, genuine moments, like watching the contestants cook together, “so that they can really be themselves, and not be robotic, as we often are on first dates.” Their dates take place in an air-conditioned food truck, but as she points out, that didn’t stop situations from becoming chaotic. “We never knew what was going to happen. Some people were not even phased by the heat challenges, and then some people would smell something and freak out.”

When it comes to reality television in general, Catta-Preta is a fan, “I'm fascinated by reality TV. People think it's lowbrow,” she said. “I am really fascinated by the psychology of what happens to people when they're under pressure and in front of a camera, and then you add the date aspect as well, and the potential love interest in there, and it really makes people go wild.” But the host revealed that even though she loves spice, in theory, her body does not. So, while she’s not all that enthused in trying some of the spicier plates, she sounded excited about people feasting their eyes on the show. “I'm excited for people to watch the show. The world's really dark right now, and we could all use a nice little summer binge.”