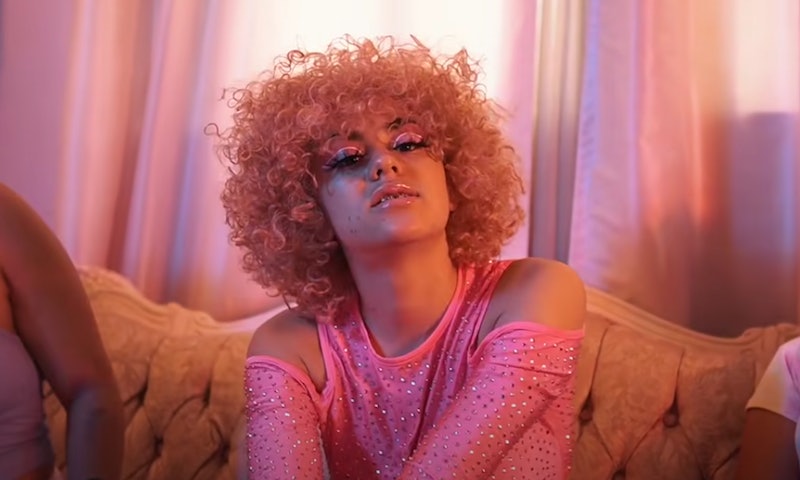 TikTok, in all its short-form video glory, has emerged as the ultimate platform as the pandemic rages on. All those viral lip sync and dance videos and comedic clips courtesy of TikTok influencers have provided some much-needed serotonin boosts. Currently, it's the song stylings of PPCocaine, a viral TikTok star and rapper, that have users dancing in quarantine. PPCocaine, real name Lilliane Diome, is the TikTok star behind, among other trends, the viral “Shake Some Ass” dance trend, and, as her songs continue to inspire content, even those not using TikTok are going to want to learn her name.

PPCocaine is best known for her aggressive vocal deliveries in her rap songs and her signature pink hair. She’s only dropped a few songs so far, but the short snippets are consistently used in the backdrop of other comedic or earnest TikTok clips. She goes by @ppcocaine on Instagram, where she has 174K followers, but on TikTok, she goes by the handle @trapbunniebubbless, where she has 1.3M followers. She debuted a music video for one of her songs, “DDLG” (an acronym for Daddy Dawg Little Girl), in July, which generated a lot of reaction videos from YouTube stars for its raunchy lyrics and visuals. Basically, she's one to watch.

Here's everything you need to know about PPCocaine:

PPCocaine is a rapper best recognized for her aggressive drawl while rapping — one that makes it sound like she’s almost screaming. She’s released tracks like “DDLG,” “Shake Some Ass,” "3 Musketeers," and “For That Cash.” She told The Hollywood Fix that her music is inspired by Rico Nasty, Stunna Girl, Bali Baby, and Flo Milli. “I like aggressive females,” she said. “I like that sound.”

The “Shake Some Ass” Dance Trend

“Shake Some Ass” was released in June and quickly became an anthem for women psyching each other up. PPCocaine’s original audio has been used in over 498,000 TikTok videos, including one by James Charles.

PPCocaine frequently reveals personal tidbits on TikTok. Responding to comments on her skin tone in a recent video, she said, “Not a lot of you guys know this and this will come as a shock to more than half of you, but, my dad: African, my mother: Caucasian. One plus one? Light skin.”

She Created a "Lesbian Anthem"

PPCocaine, who is openly queer, has a track called “For That Cash" that has been heralded as a lesbian anthem on TikTok, thanks to lyrics like,“You think this shit's a game? Well you were just my pawn” and “Your girl tastes nice, I know the spots to turn her on.” It became such a rallying cry for the LGBTQ community on the app, that TIkTok star Addison Rae came under fire for lip syncing to the track, with many accusing her of “appropriating LGBTQ culture.”

More like this
Twitter Is Having A Meltdown Over Buying Beyoncé Renaissance Tour Tickets
By Jake Viswanath
The Beyhive Is Mad At Harry Styles After Beyoncé’s Album Of The Year Snub
By Jake Viswanath
Beyoncé Has Officially Won The Most Grammys Ever & Twitter Is Losing It
By Jake Viswanath
Here’s How You Can Watch The Grammys 2023 In The UK
By Emma Madden and Catharina Cheung
Get Even More From Bustle — Sign Up For The Newsletter
From hair trends to relationship advice, our daily newsletter has everything you need to sound like a person who’s on TikTok, even if you aren’t.