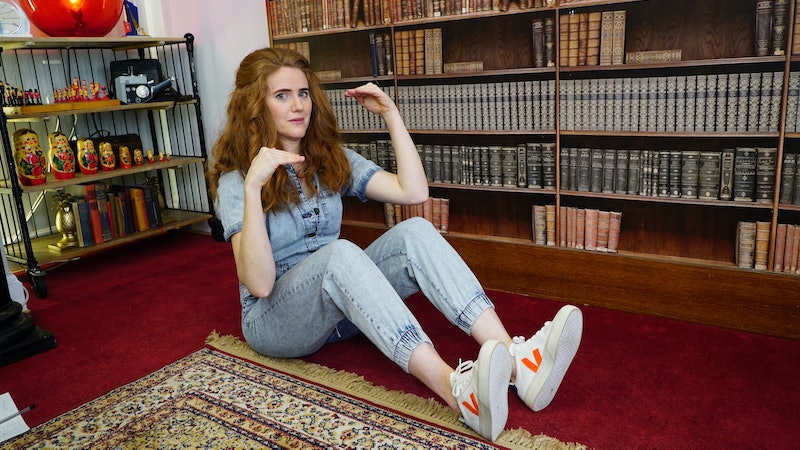 We're lucky to live in an age when female comedians are *finally* get some of the recognition they deserve. I mean don't get me wrong, funny women are nothing new. Look at shows like Smack The Pony or the comedic genius of Dawn French, Jennifer Saunders, and Kathy Burke to name a few. It's just they never got as much air time as their male counterparts. But, thankfully, it looks like that's all changing. Take Sarah Kendall, for example, who wrote Frayed for Sky in 2019, and will be a panellist on the upcoming series of Taskmaster. But who is Sarah Kendall, and what else should we know about her?

Kendall is an Australian comedian and writer who has been based in the UK for many years. According to the profile on her management's website, the star is no stranger to success, having won multiple awards throughout her comedic career. She has also lent her face and talent to a multitude of well-known shows including Russell Howard’s Good News, Best Behaviour, The Now Show, and Dilemma. She also regularly performs live at huge international comedy events like the famous Edinburgh Fringe and The Melbourne International Comedy Festival. She has also written for TV shows like Beehive and Frayed, the latter of which she starred in.

According to the Guardian, the Sky Comedy is all about Sammy, who left her life in Australia behind when she moved to London. Set in the '80s, Sammy enjoys the luxurious lifestyle she has managed to carve out for herself in the UK having married a wealthy man and produced two children. With little more to do with her time than attend divine events, organise dinner parties, and just generally lap up all of that luxe she has climbed the ladder to enjoy.

However, all of this begins to fade away when her husband dies suddenly. And after his death it's revealed that the couple's financial situation was, in actual fact, in dire straits. Leaving her without a hope in hell of maintaining the lifestyle she once had and with no place to go.

The show was filmed between London and Kendall's native Australia. In particular, the crew filmed in Newcastle, where the Kendall grew up. She spoke to the Scotsman about how strange it was to shoot in her hometown, saying:

"What was weird for me was to be filming a show set in the world of my childhood, and to be filming that show in the town that I grew up in. That was a surreal experience. I got a real kick out of that."

The upcoming series of Taskmaster was another surreal experience for Kendall. “You go into it sort of thinking, ‘Well, who cares if you can’t get this frozen banana into a bottle of lubricator’,” the comedian told Channel 4, “and then by the end of the show you find yourself seriously stressing about how to get it in there. It’s a slippery slope.”

She also credits parenting as a crucial skill for the show. “I think parenting prepares you beautifully for boring and repetitive task work,” Kendall explains. “So in a way I’ve been psychologically crushed enough to be compliant and not question it.”

It’s going to be very interesting to see how Kendall translates this to the tasks, thats for sure.

This article was originally published on Sep. 26, 2019