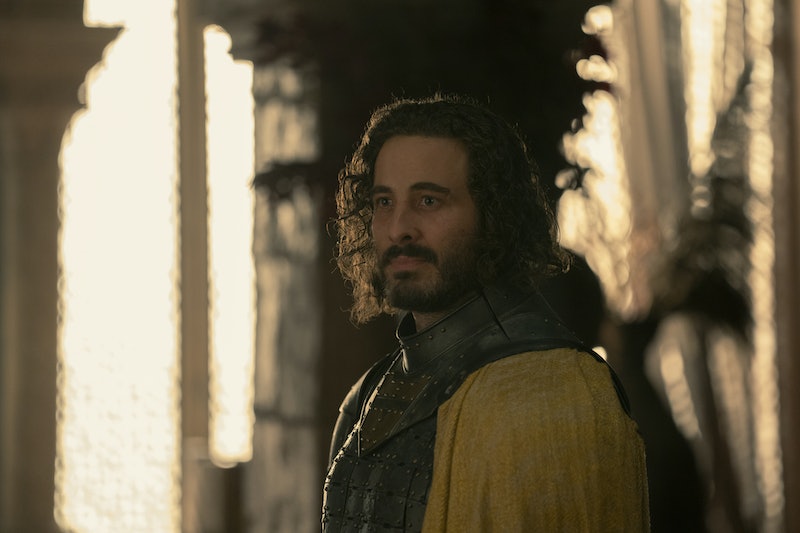 The realm is full of rumors, but Episode 6 of House of the Dragon may introduce the biggest scandal thus far. The trailer previews some of the gossip, which revolves around an inappropriate relationship between Princess Rhaenyra Targaryen (Emma D’Arcy), and Ser Hawrin Strong (Ryan Corr). In Episode 5, Rhaenyra was married off to Lord Laenor Velaryon (Theo Nate); however, the young couple made a deal that they could sleep with whomever they liked, seeing as they weren’t attracted to one another. Their agreement, if kept private, would be no big deal — except for the fact that a rumor started suggests that Rhaenyra’s heirs resemble Ser Harwin and not her husband.

Are Harwin and Rhaenyra Having An Affair?

Ser Harwin first appeared in Episode 3, during the Targaryen royal hunt. After Rhaenyra abandoned the festivities, she was joined in the forest by Ser Criston Cole (Fabien Frankel). In the wilderness, the duo were happened upon by a wild boar, but thankfully they were able to slay the beast. Near the end of the episode, Rhaenyra drags her kill through the royal camp, showing off her prowess and capability. However, during her return, she’s gazed upon longingly by Ser Harwin, who was in the midst of skinning a rabbit.

In Episode 4, when Rhaenyra and Prince Daemon (Matt Smith) were disguised and galavanting through flea bottom to see how the commoners lived, Ser Harwin popped up again. While trying to both entice and antagonize Daemon, Rhaenyra ran off through back alleys. During her sneaking, she ran directly into the chest plate of Ser Harwin, a member of the City Watch. There isn’t much to the interaction besides a glance, and the understanding that he recognized her despite her disguise.

In Episode 5 at Rhaenyra and Laenor’s wedding, the two meet eyes again. Once the fateful melee broke out at the ceremony, Viserys (Paddy Considine) shouted for Ser Harwin to remove a knocked-down Rhaenyra from the chaos. Following the king’s orders, Harwin breached the brawl, threw Rhaenyra over his shoulder, and transported her to safety away from the fighting.

In the George R. R. Martin books, Harwin serves as the captain of the gold cloaks in King’s Landing. Being an important figure in the court, he was no stranger to Rhaenyra, even acting as somewhat of a suitor for the young princess, despite his vows to the realm. However, on one occasion, after her advances toward Ser Criston Cole were rejected, Rhaenyra found solace and comfort in the company of Ser Harwin. While nothing was substantiated, the duo were alleged to have shared a bed together. At the royal wedding between Rhaenyra and Laenor, the princess granted Ser Harwin her favor during a celebratory tourney. However, it was at said tourney when Ser Criston broke Harwin’s collarbone and shattered his elbow, and thus, Harwin was earned the name “Brokenbones,” or “Breakbones.” Despite his injuries, Harwin was a mainstay at Rhaenyra’s side, and would go on to become one of her staunchest supporters during the Targaryen civil war.

When Rhaenyra was due to give birth to her second son, Lucerys, she was joined at her bedside by both Ser Laenor and Ser Harwin. Usually a shield’s presence isn’t out of the ordinary, however, there was widely held belief in the realm that Harwin, and not Laenor, was the biological father of her children. The scandal brought more dishonor upon House Targaryen, as rumors of Rhaenyra’s promiscuity began to swirl once again. When her rivalry with Alicent grew to be too great, Rhaenyra opted to move to Dragonstone to evade dissent from Alicent’s supporters. Harwin went with her, continuing as her sworn shield.

Harwin’s downfall began after Prince Aemond Targaryen, the second son of Alicent and Viserys I, referred to Rhaenyra’s sons as “Strongs,” which incited a brawl. As consequence, King Viserys I removed Harwin as Rhaenyra’s protector. He was replaced by Ser Erryk Cargyll, another Kingsguard member, before being banished to Harrenhal. Later that same year, Harrenhal would be engulfed in a fire that would claim the lives of both Ser Harwin and his father Lyonel.

Many believed the fire to have been a result of the cursed nature of Harrenhal, while others theorized that it was actually Prince Daemon who set the flame to eliminate any of Rhaenyra’s possible suitors or lovers. Other suspects included Corlys Velaryon, who wanted revenge on the man who cuckolded his son; King Viserys, who wanted revenge on the man who brought dishonor to his house; or Larys, who stood to inherit Harrenhal after his brother’s death.

Harwin Strong also has a brother, the sneaky-seeming Larys (Matthew Needham). He was introduced in Episode 3 as the meek-seeming man with the impaired foot fitted with an iron boot. Unable to participate in the revelry of men, he opted to sit amongst the women and listen to their conversations. The duo share a father in Lord Lyonel Strong (Gavin Spokes) who serves as Viserys’ Hand after Otto Hightower (Rhys Ifans) was dismissed in Episode 4. Where one of Lyonel’s sons relies on his strength, the other relies on his cunning.

In Episode 3, it was Larys who planted the seeds in Alicent’s head that Rhaenyra may have been up to something on her night out with Daemon. That led to Alicent’s confrontation of Ser Criston, ultimately resulting in Alicent’s statement-making green dress at the royal wedding.

In the source material, it was never established which side Larys was loyal to during the Dance of Dragons. After Harwin and Lyonel died in the fire at Harrenhal, Larys become Lord of Harrenhal, and would go on to become the master of whispers on Viserys I’s small council. After the king’s death, Larys pledged his support behind Alicent’s cause, swearing a blood oath to support Prince Aegon II’s ascension over Rhaenyra’s.

When the civil war began, Daemon seized Harrenhal, forcing Larys to flee to King’s Landing. However, his presence there was short lived, as he once again escaped the capital when Rhaenyra took over the city. Larys aided Prince Aegon and his remaining children Maelor and Jaehaera to escape during the fall of King’s Landing. He split up the trio of Targaryens, sending Aegon back to Dragonstone, where he thought Rhaenyra would never think to look. However, Aegon’s younger brother Aemond wasn’t so certain about Larys, and believed the Strong brother had aided Rhaenyra in the destruction of King’s Landing, so Aegon had the remaining Strong family members killed.

Back in King’s Landing, Larys was slyly working against Rhaenyra, allegedly spreading the rumor that the captive Helaena Targaryen, the daughter of Alicent and Viserys, was murdered on Rhaenyra’s orders, despite the fact that it was a suicide. The wake of her death resulted in a riot that forced Rhaenyra out of the city. In her stead, Trystane Truefyre was crowned king, rumored to be a son of King Viserys. Larys worked at Trystane’s side during his short reign, but would then double-cross the king, and secure the throne for Alicent’s cause. He then freed both her and Corlys from the dungeons. However, Larys was ultimately executed after accusations that he’d poisoned King Aegon.

More like this
'The White Lotus' Costume Designer Explains That Accidental 'Princess Diaries' Moment
By Grace Wehniainen
Everything To Know About 'The White Lotus' Season 3
By Grace Wehniainen
The 'Love, Lizzo' Harry Styles Scene Is Just 1 Moment That Made Fans Feel Seen
By Brad Witter
Matt Smith Proves He's Daddy Daemon In This Viral 'House Of The Dragon' Video
By Marina Watts
Get Even More From Bustle — Sign Up For The Newsletter