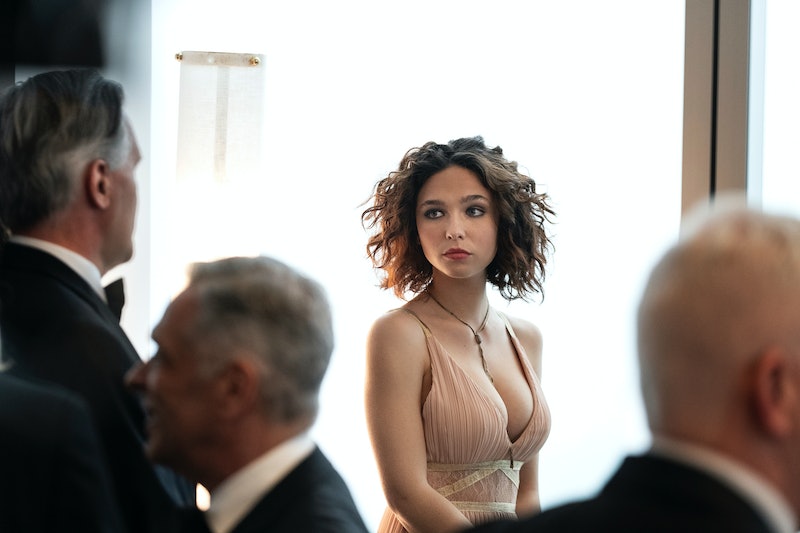 Spoilers ahead for The Undoing Episode 1. Most of The Undoing's Season 1 premiere follows therapist Grace Fraser (Nicole Kidman) and her husband Jonathan's (Hugh Grant) exorbitant but somewhat boring lives among the upper crust of Manhattan. But the end of the episode shifts that entirely when Elena, a new mom at the expensive private school their son attends, is found dead.

Though police are investigating Elena's husband — rightfully, considering violence against women is often caused by an intimate partner — they also seem interested in Jonathan. Whoever killed Elena had to have known her: she was murdered in her art studio, not just on the street, so it wasn't random. And when two detectives show up at Grace's house, they're already asking questions about Jonathan in a way that suggests he was involved.

This casts a new light on Jonathan's interactions with Elena at the school fundraiser he and Grace attended the night of her death. When Elena saw Jonathan and Grace at the party, she seemed stunned. Jonathan appeared equally thrown off when Grace pointed out Elena as the new woman on the auction committee she'd told him about. The other women from the committee noted that Elena was staring at Grace, which Jonathan also noticed. Shortly afterward, Elena left the party visibly distressed. Jonathan also excused himself, saying that he had to rush to the hospital to treat a patient.

When Jonathan came home, he seemed distressed as well. Grace thought it was because his patient died, but could it have been because he just murdered Elena? Even more suspicious, Jonathan conveniently goes to a work conference the next day, but leaves his phone at home and hidden in the nightstand drawer. A frantic Grace tries to get ahold of him by calling every Hyatt in Ohio, and eventually is connected with a man named Jonathan Fraser. But it's not a voice she recognizes. What — and I want to emphasize this — the f*ck is going on? Warning: book spoilers ahead, only keep reading if you want to potentially spoil the show.

The Undoing is based on Jean Hanff Korelitz's 2014 novel You Should Have Known, which obviously does explain all of this, though it's unclear if the show will follow the exact same storyline. In the book, Elena's name is Malaga and her newborn daughter's name is Elena, after Malaga's mother. Grace is also promoting a self-help book that's all about recognizing warning signs in boyfriends and husbands. So it's ironic that she misses them all in her own. Jonathan does kill Malaga in the book, because they were having affair and he wanted to prevent her from revealing it to Grace. Malaga's baby is also Jonathan's. And those are the only beginning of all of the secrets he's been keeping, leaving Grace a very tangled web to unweave as she searches for the truth.

It's possible that the show will have a different ending or a different killer than the book. Don't rule out Elena's husband, who was purportedly having problems with his wife. And don't rule out Grace's friend Sylvia or any of the other women on the auction committee, who couldn't seem to stop talking about how weird and gauche they thought Elena was. Maybe don't even rule out Grace. But if the answer does end up being Jonathan, it won't be that surprising. The clues are already adding up.