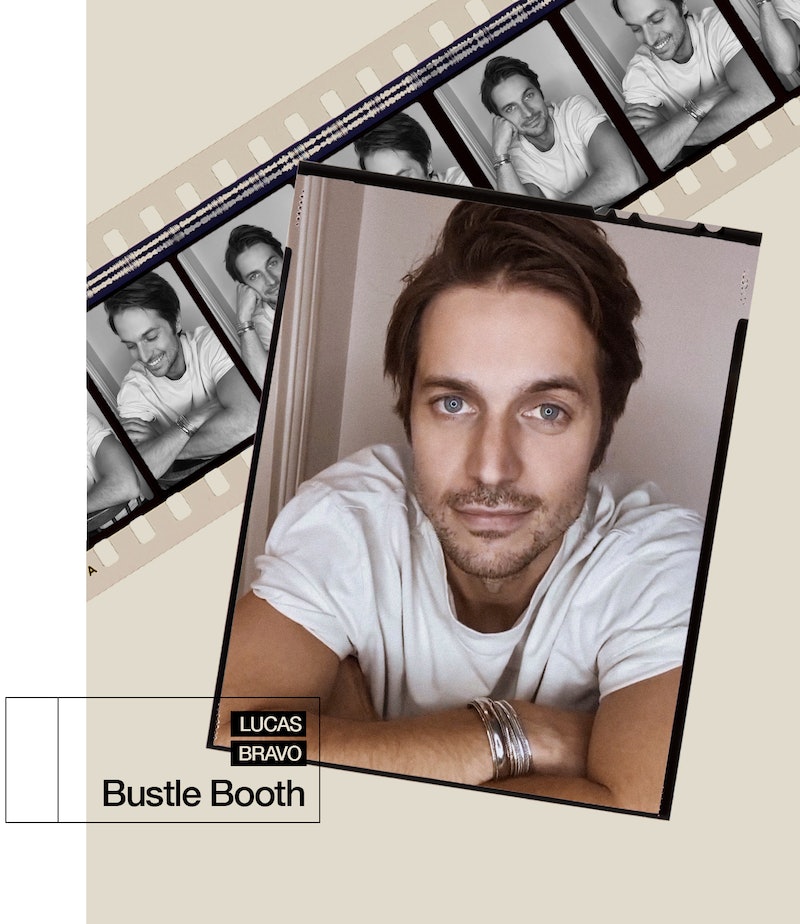 One of the first friends Emily (Lily Collins) makes after moving to Paris in Netflix's Emily in Paris is Gabriel, her very attractive downstairs neighbor with whom she develops a complicated flirtationship. The two are both at big life junctures: Emily has just uprooted her life in Chicago for a last-minute job opportunity in Paris, and Gabriel is working as a local chef but dreams of opening his own restaurant. To complicate matters, he's in a relationship, though he's clearly drawn to Emily. "He's lost at the beginning of the show," Lucas Bravo says of his character. "Emily represents that curiosity that he's gonna follow."

Being lost was a feeling Bravo could relate to. Moving around constantly as a child — his father was a soccer player — Bravo was forced to adapt to new environments and people. "I became sort of a chameleon. I knew how to fit in in any group. But in that process, I didn't really know who I was," he explains. Acting represented something more concrete. "They give you a script with this character and they tell you how he walks, how he moves, how he thinks... everything's on paper," Bravo says. "And I felt such confidence, such validation in comparison to my life, where I didn't really know what I was supposed to do."

At 32, Bravo now feels more certain of himself. When I ask which Sex and the City character he most identifies with — a prerequisite for anyone working on a Darren Star show — he says Carrie's ex-boyfriend Aidan Shaw, because he's simple and down to Earth. Like Gabriel, Bravo has worked as a sous chef and enjoys cooking, traits he sees as similar to Aidan's woodworking. He also enjoys music festivals; when a friend brought him to Burning Man in America, he says it changed his life. "I was so astonished by the fact that you can live for an entire week without having anybody asking you what you do in life. People just looking at you in the eyes."

It was that same mellow attitude Bravo held onto while quarantining in France earlier this year. Though he tried learning Japanese on Rosetta Stone for a few weeks, he eventually realized what he really needed was rest. "I loved the fact that everything was on hold," he says. "We could really appreciate the silence and the calm and not feel obligated to do anything."

Get to know more about Bravo — including his favorite TV couple — in his Bustle Booth questionnaire below.

"Sometimes awful things have their own kind of beauty"

It’s always sunny when he’s around

"Ain't No Sunshine" by Bill Withers