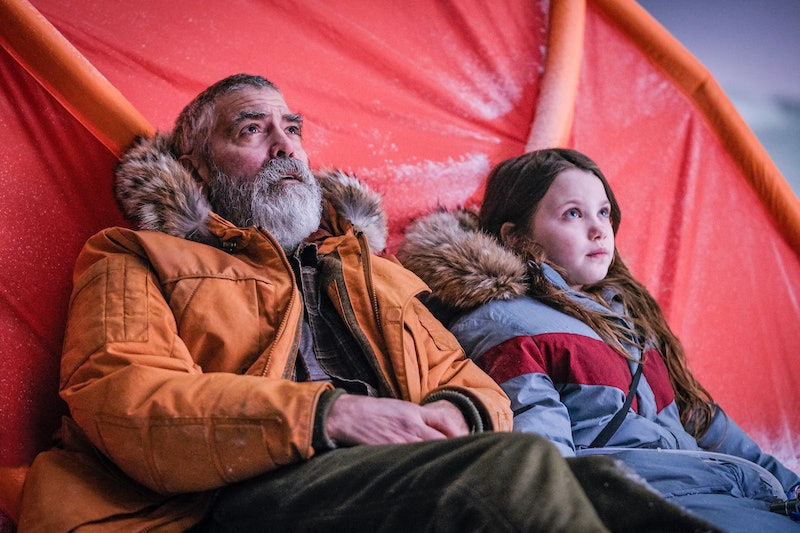 George Clooney's latest directorial effort, The Midnight Sky, features lots of familiar faces. Clooney himself stars in the film as a surly scientist named Augustine along with Felicity Jones, David Oyelowo, Kyle Chandler, Demián Bichir, and Tiffany Boone. But the newest face in The Midnight Sky is that of 7-year-old Caoilinn Springall. Springall plays Iris, a young girl left behind at an Arctic observatory after an unexplained planetary disaster leads everyone on Earth to evacuate. Springall's performance is mostly silent, as her character has experienced something quite traumatic. But even though she's a definite newcomer (The Midnight Sky is her first film) Springall went toe-to-toe with Clooney in a powerfully moving performance.

Streaming on Netflix beginning Dec. 23, The Midnight Sky takes place in 2049. Augustine Lofthouse (Clooney) stays behind on Earth after a devastating event leads to the evacuation of the entire planet, with humanity either launched into space or sent underground. But after a bit of time alone, Augustine discovers he wasn't the only one left behind. A little girl named Iris (Springall) has also been abandoned, and together she and Augustine must find a way to warn a returning spacecraft that the Earth is no longer a habitable place. The two venture off into the frigid Arctic to find a stronger antenna to get them the message and have to find a way to survive together.

Springall was one of hundreds who auditioned for the part, Deadline reports. "She puts to shame a lot of grown actors, including myself, who had to prepare for a scene," Clooney says. Though as Variety explains, when Springall showed up to shoot the film, she had only seen one George Clooney movie before: The Fantastic Mr. Fox.

As Springall also explains to the outlet in a joint interview with Clooney, she auditioned in London and then got the call to meet with Clooney, his producer Grant Heslov, and the casting director. "I was pretty excited and a little bit nervous. I went numb. George told me to do this important scene as Iris, and then we waited a couple of weeks. Then we got the phone call that we’ve got it, and I was jumping up and down. And then I found out that we were going to Iceland, and I was sad that I would leave my family behind, but at least I was going to Iceland."

While Springall was excited to go to Iceland, filming there wasn't without its challenges. Clooney and Springall had to shoot in blizzard conditions in a country that was only light from 11 a.m to 3 p.m. "Caoilinn had these big goggles on, wrapped up and getting blown over and knocked down to the ground," Clooney tells Variety. "We were digging ourselves into holes in the ice, and we would walk down to an ice cave. It looks like a set, but that’s a real ice cave, way down, and Caoilinn was a trooper."

Between her incredible performance and on-set professionalism, Springall surely has an exciting career ahead of her.

More like this
Maxim Baldry Plays This Pivotal Role In 'The Lord Of The Rings' Universe
By Maxine Harrison
Mike Flanagan Teases 'The Midnight Club' In This Exclusive, Creepy Clip
By Grace Wehniainen
Everything You Need To Know About ‘Black Panther: Wakanda Forever’
By Bustle Editors
Lindsay Lohan & Jonathan Bennett Celebrated Mean Girls Day Very Differently
By Jake Viswanath
Get Even More From Bustle — Sign Up For The Newsletter