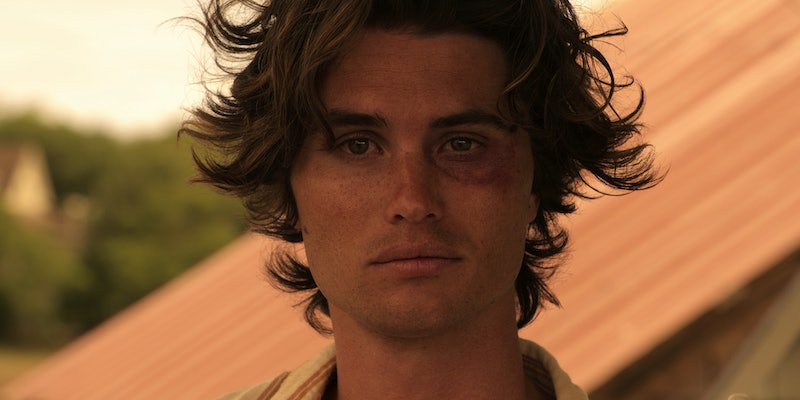 Most of the stars of Netflix's new YA series, Outer Banks, are relative newcomers. But Chase Stokes, who plays John B, may be at least somewhat familiar to those who have a penchant for teen dramas. That's because the actor is no "stranger" to Netflix shows: he previously had a brief role in Stranger Things.

Stokes appeared all the way back in the sixth episode of Season 1, titled "The Monster." He played a high school student named Reed, who made some lewd remarks about Nancy after reading the derogatory graffiti that Steve wrote about her in spray paint on the theater's marquee. It wasn't exactly a memorable moment, nor did it give Stokes a real opportunity to show off his acting chops. However, all of that is about to change with Outer Banks.

Stokes' character, John B, is part of a group of misfit teens who call themselves the "Pogues." His father's mysterious disappearance serves as the catalyst for the story, sending him and his friends on a quest to discover what happened to his dad — and in the process, uncovering the treasure hunt he left behind for his son.

Aside from Stokes' small stint on Stranger Things, he also starred in Tell Me Your Secrets, One Of Us Is Lying, and Daytime Divas, but he's still just starting to make a name for himself. Outside of acting, Stokes loves being outdoors, whether that involves hanging out at the beach or posing on top of some really big rocks. And he has an adorable dog named Jack who pops up on his Instagram frequently (though, honestly, not frequently enough).

Outer Banks fans will have to wait and see what happens to John B, but as far as Stokes is concerned, things are only going up from here.