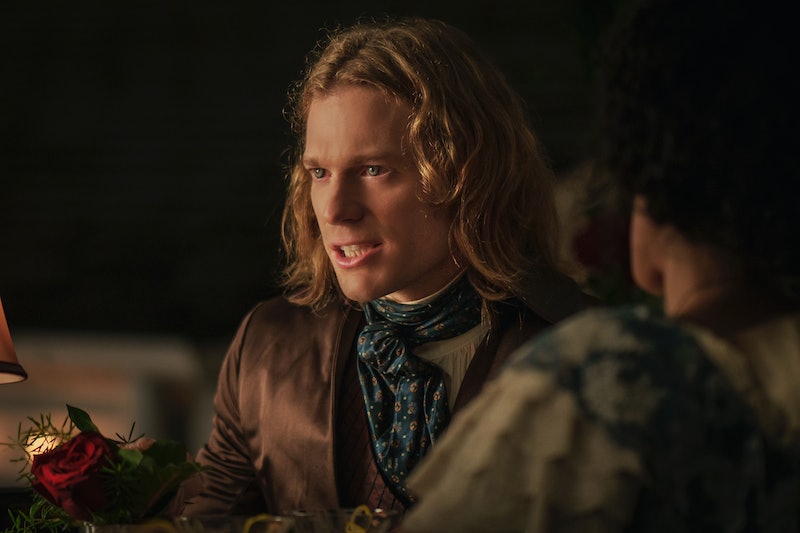 How long have you been dead? It’s an odd question for an interview unless you’re talking to a vampire. That’s the premise of AMC’s new series, Anne Rice’s Interview with the Vampire, which premiered Oct. 4. The series follows the story of the undead Louis de Pointe du Lac (Jacob Anderson) as he tells his life story to journalist Daniel Molloy (Eric Bogosian). His sprawling history is put on display, including his relationship with fellow vampire Lestat de Lioncourt (Sam Reid) and the duo’s vampiric ward Claudia (Bailey Bass). Based on the 1976 novel, what can audiences expect from Lestat in this modern retelling?

Australian actor Sam Reid takes on the iconic role of Lestat after Tom Cruise made the vampire famous in the 1994 movie adaptation. No stranger to the screen, Reid already has a handful of credits including supporting roles in period dramas Anonymous and Belle. But Interview with the Vampire may serve as Reid’s biggest role to date.

While Cruise’s shoes might be big ones to fill, Reid is more concerned with living up to Lestat’s novel counterpart, rather than the movie version. In an interview with ComicBook.com, Reid said that he was already a “huge fan” of the books. "When I read that it was going to be made into a TV show, I was just really hopeful that I had the opportunity to audition for it.” He went on to discuss the challenges he felt when trying to live up to a character that he already loved. “I mean, there's a huge amount of pressure because they're so loved, these books, and this world that she created,” he said. “But also the pressure that you put on yourself to live up to them as well is full on. But what an extraordinary opportunity and gift and privilege to be able to be a part of it."

Reid also wants to do right by the character’s author, Anne Rice. “She’s formed a type of identity that people can carry around: ‘I'm an Anne Rice reader.’ It's just so exciting to be a part of it. I hope that her readers will accept us,” he told Esquire ahead of the premiere. When Rice passed away in December 2021, Reid went to the author’s hometown of New Orleans to pay tribute at the famed Garden District Book Shop, where Rice would do signings.

As for his approach to the character, Reid explained Lestat’s dark passion to Esquire. “Lestat always starts with a deep attraction or deep love for someone, then becomes quite sadistic in the way that he approaches those relationships,” he said. Lestat is a “monster who loves first.” The character isn’t meant to be implicitly scary, though he naturally sinks into antagonism.

Naked levitation aside, Reid still finds that there’s something relatable about vampires. “The key themes to which they’re always connected are death, which everyone has a certain relationship with, and sex,” he said. Vampires have a natural tether to agony, love, and depravity, which Reid also believes is a byproduct of the human condition. Alive or not, there’s something vampiric in all of us.

“There's nothing really like the vampire,” he said. “That's why it transcends and has lasted so long. People want to see them because it's a fun feeling, being able to relate to a mythical creature in such a profound way.”