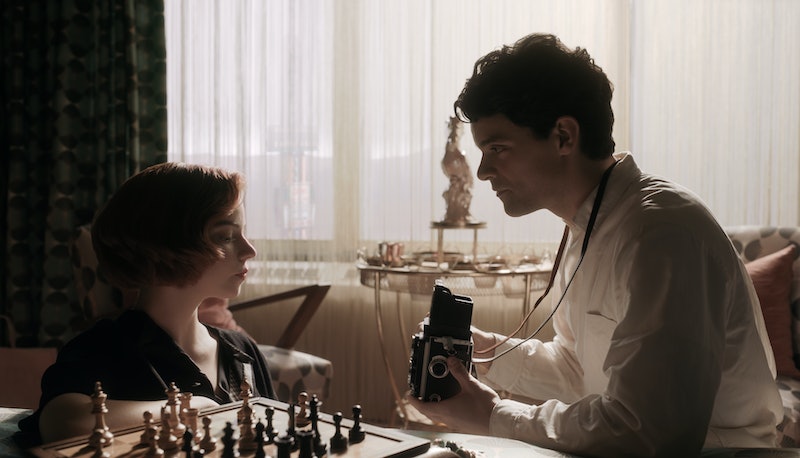 Beth Harmon (Anya Taylor-Joy) isn't a woman who's easily flustered. In Netflix's new limited series The Queen's Gambit, she beats numerous men in chess without batting an eye. But when she meets Townes, played by Jacob Fortune-Lloyd, she's smitten immediately.

"Some of my favorite chess matches are when Beth plays Townes and it's the first time she hasn't actively wanted to thrash someone because she likes him," Taylor-Joy told TV Insider. "She feels conflicted about undermining his intelligence and his skill in the game, whilst also still wanting to win. I thought that was really interesting."

In order to prepare for the role, Fortune-Lloyd perfected his chess game. And apparently he got pretty good. "Thomas did you play, Jacob? Because Jacob was good. Jacob was really good," actor Harry Melling remarked to his Queen's Gambit co-star Thomas Brodie-Sangster during an interview with Uproxx. "I didn't. He played properly," Brodie-Sangster replied.

Chess is just one in Fortune-Lloyd's toolbox of non-acting skills: according to his Guild Hall School bio, he also can dance, ride horses, beatbox, and play the harmonica. He's also used to doing odd prep work for his roles: while playing Archbishop Francesco Salviati in Netflix's Medici, he studied snakes in order to channel the character's sneakiness.

Beyond Medici, you may recognize Fortune-Lloyd from a small role in Star Wars: Episode IX - The Rise of Skywalker. He performs theater regularly in the UK, having appeared in The Importance of Being Earnest, Macbeth, and Othello, among others. But The Queen's Gambit is inarguably one of his biggest roles yet. And while his character may not have been good enough to trounce Beth, his chess skills were definitely the talk of the Netflix set.

More like this
What’s New On Netflix: Ana De Armas’ 'Blonde' & A Nick Kroll Special
By Arya Roshanian
Nicola Coughlan Shared A Lady Whistledown Excerpt From ‘Bridgerton’ Season 3
By Grace Wehniainen, Alyssa Lapid and Sam Ramsden
Devi Is Going To Meet A “Smoldering Bad Boy” In ‘Never Have I Ever’ Season 4
By Jack Irvin and Gabrielle Bondi
New ‘Lupin’ Part 3 Teaser Hints That Assane Will “Go Out In Style”
By Brad Witter
Get Even More From Bustle — Sign Up For The Newsletter