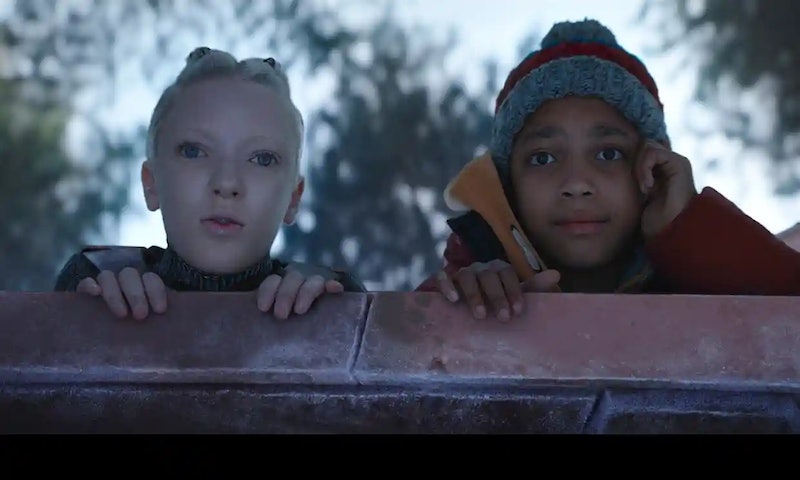 Released two weeks earlier than usual, John Lewis has got the nation tearing up with their new Christmas advert. Titled Unexpected Guest, the two-minute film follows Nathan, a young boy who discovers a fallen spaceship in the woods. The inquisitive Nathan befriends Skye by showing her his light-up Christmas tree jumper, which includes a star similar to the shape on her chest plate.

As their friendship grows, Nathan shows Skye the magic of Christmas by decorating a tree with a bundle of lights, sneaking her mince pies, and watching a festive film on top of the spaceship. When it’s time for her to leave, and in an E.T.-inspired ending, Nathan gives her his Christmas jumper as a gift. The young boy watches with tears in his eyes as she flies away, and her spaceship eventually settles above the tree Nathan decorated, twinkling like a star.

The advert stars Jordan A. Nash as Nathan, and Raffiella Chapman as Skye. Both have appeared alongside pretty major Hollywood stars, with Nash starring in the 2020 film Come Away with Angelina Jolie and David Oyelowo, while Chapman played Lucy Hawking in The Theory of Everything when she was just five-years-old.

Who Sings The Song In The John Lewis Christmas Advert?

Following on with their festive tradition, the advert features an acoustic rendition of a familiar song. This year, Nathan and Skye’s blossoming friendship is set to Philip Oakley and Giorgio Moroder’s “Together in Electric Dreams”, sung by British musician Lola Young.

Who Is Lola Young?

Young is a 20-year-old musician from South London, who studied at the Brit School in Croydon where the likes of Adele and Amy Winehouse honed their music skills. According to the Evening Standard, won the top prize at a national open mic contest and shortly after Young landed a record deal with Island Records.

The musician released her debut album Intro in 2019, which features the single ‘Blind Love’ which has become one of her most popular tracks. Prior to her cover of ‘Electric Dreams’, Young recently released her new single ‘FAKE’ showcasing her powerful vocal range.

You can follow Young on Instagram and Twitter, and you’ll be able to see her live this November on her seven-date tour, which features performances at the Lafayette in London, the Poetry Club in Liverpool, and The Sound House in Dublin.