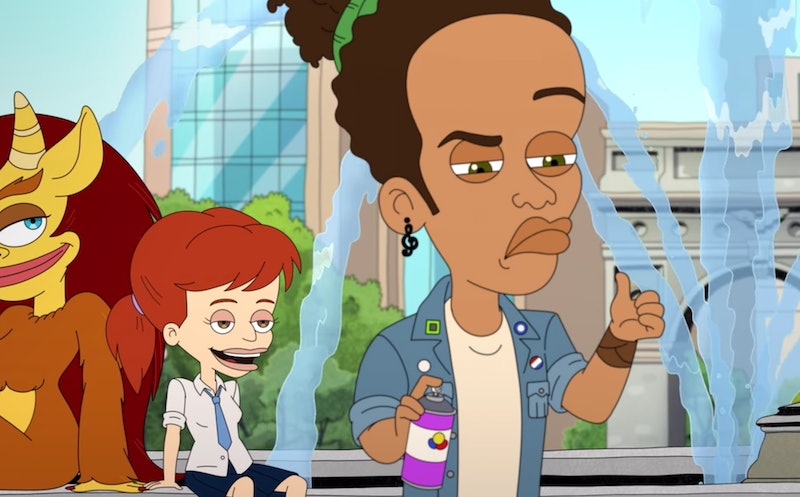 After bringing Frozen 2's Lieutenant Mattias to life in 2019, Sterling K. Brown is lending his voice to Jessi's boyfriend Michael Angelo on Big Mouth Season 4. You may not immediately recognize that it's him, though: he uses a British accent for the character.

As Nick (Nick Kroll) observes in the Big Mouth trailer, all of the teens are "coupling up." And after Jessi moves to New York, she finds herself in the arms of Michael Angelo, a street artist who Connie (Maya Rudolph) refers to as an "international hunk of mancakes." He doesn't have many attributes aside from being hot and British, but as Tito the Anxiety Mosquito (Maria Bamford) tells Jessi, "everyone is moving on and doing really well without you." So Jessi clings to him.

Though Brown is best known for his live action role in This Is Us, he previously voiced characters in The Angry Birds Movie 2 and Kipo and the Age of Wonderbeasts. "I'm always looking to do something different than [This Is Us'] Randall, because I know I get a chance to do that 18 episodes a year," he told The Hollywood Reporter in 2019. "It's really flattering that people are attached to the character of Randall, but I'm real careful to make sure that people don't confuse me [with] Randall. Now that people keep telling me that I make them cry all the time, I'm kind of eager to make them laugh a little bit — flex the old funny bone as long as I can."

It's safe to say that Big Mouth's Michael Angelo is a major departure from Randall Pearson.