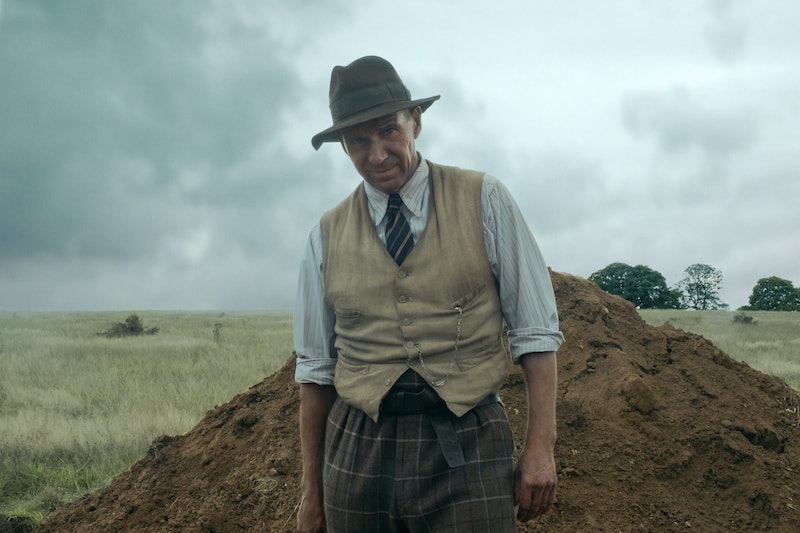 There's a moment in the new historical drama The Dig when a mound of dirt collapses on Ralph Fiennes' character Basil Brown. Fiennes' co-star, Carey Mulligan, rushes over to claw at the dirt, freeing his face from the Earth. To shoot the nail-biting scene, Fiennes really was fully covered in soil, and Mulligan, whose face appears terrified on screen, says she wasn't really acting. "It was the most terrifying moment of my career!" she told The Daily Mail. "I was responsible for getting the soil away from his face. As the cameras came down, all I could think was: 'Don't let me kill Ralph Fiennes!'"

The Dig tells the true story of wealthy widow Edith Pretty (Mulligan) who, in 1939 as England was on the brink of war with Germany, hires amateur archeologist Brown to excavate the mysterious mounds on her vast Sutton Hoo country estate in Suffolk. In real life, Pretty and Brown uncovered a 7th Century Anglo-Saxon burial ship that would change what Britons knew of their own history and upend the archeological world forevermore. But Brown, a farmer’s son who left school at 12, was "unorthodox and untrained," and despite making one of archeology's greatest discoveries, went many decades without the recognition he deserved.

Fiennes, who was also born in Suffolk and whose father was a farmer, was attracted to the role because of their shared roots. "Basil Brown was an extraordinary figure and a self-effacing man," he said in the film's press notes. "[The script] moved me very much, this story about an excavation of a burial ship."

And due to Brown's status as a working-class amateur and the fact that more "official" archeologists quickly converged on the excavation site, Brown was left out of the history books and archaeological accounts that recorded the find. "I think the archaeological establishment moved in, and they probably nodded and said, 'Thank you, you've done great work. Now could you please do the wheelbarrow?''" Fiennes told Sky News.

Thankfully Brown's neglect has since been remedied, and his name is listed prominently alongside Pretty's in the British Museum's permanent display of the Sutton Hoo treasures. "In archaeological lore or to any archaeologist who knows about the research," Fiennes also told the outlet. "They all will look at Basil Brown as a heroic example of expert excavating."

More like this
Here’s Everything Coming To & Leaving Netflix In February
By Jake Viswanath
Pamela Anderson Is Still A Hopeless Romantic
By Ilana Kaplan
'Knock At The Cabin' May Start Streaming Sooner Than You’d Think
By Jake Viswanath
Stephen Graham & Steve McQueen Are Working On A Wartime Drama
By Darshita Goyal
Get Even More From Bustle — Sign Up For The Newsletter
From hair trends to relationship advice, our daily newsletter has everything you need to sound like a person who’s on TikTok, even if you aren’t.