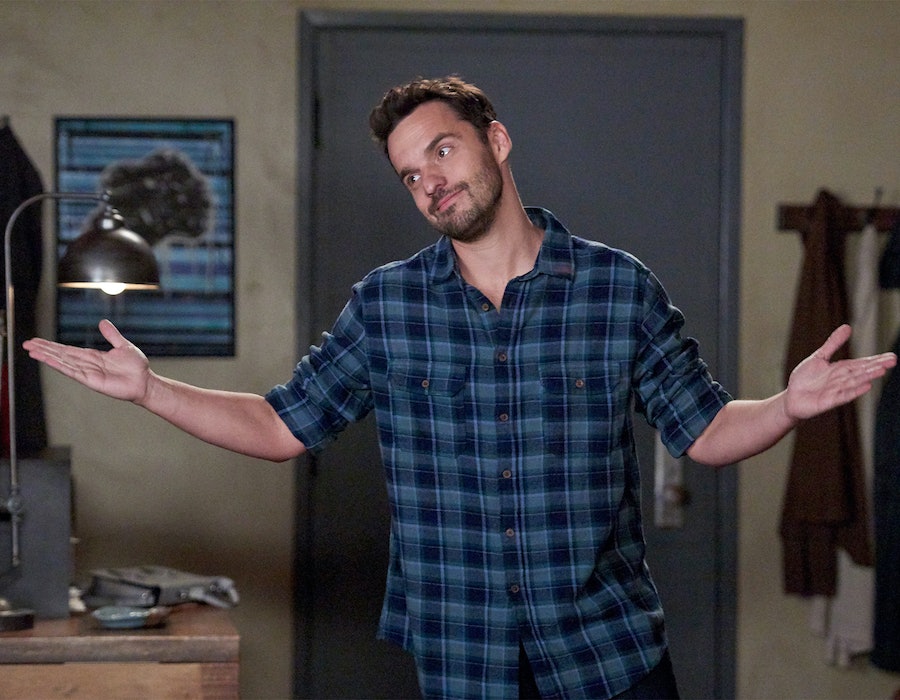 There’s a moment of New Girl lore that often comes up when speaking with Nick Miller evangelicals. After losing a round of True American in Season 2, Episode 15 “Cooler,” Nick (Jake Johnson) and Jess (Zooey Deschannel) are sent behind a makeshift rendering of the Iron Curtain and instructed to make out with a “clear and present threat of tongue.” Nick, who’s rocking a women’s trench coat with more BDE than censors should allow on cable, crumbles at the prospect of kissing his best friend. But once outside the Soviet barrier, Nick finally sticks the landing — kissing Jess while caressing her with hands that look like they’ve suddenly grown three sizes all to better cradle her back.

Pierchala’s tweet quickly went viral, (at press time it had 298,000 likes and 54,000 retweets) causing the character to trend on Twitter last week. While many were surprised to see Nick Miller’s name gracing their timeline more than two years after New Girl went off the air, they clearly haven’t been paying attention. Because Nick Miller’s highly active post-show hive has been there all along, steadily stanning the slovenly bartender all over the platform.

“He's what we wish those men who don't own curtains or pillowcases would be like in real life but they never are. He's a fantasy, but he's a perfect one."

“I have to state that Black women have been talking about Nick Miller for years,” Love In Colour author Bolu Babalola, whose Twitter bio reads “Official Nick Miller stan account™, tells Bustle. “I don't want to homogenize, but I feel like there is that sublime balance of sweetness and strength that a lot of us respond to. He is protective without obscuring agency, sexually bold without being aggressive, and always respectful.”

Writer Alanna Bennett, the self-proclaimed VP of the Nick Miller stan club (Babalola is its undisputed president), has also found that Black women are particularly drawn to the character, though she views his appeal as universal. “He's what we wish those men who don't own curtains or pillowcases would be like in real life but they never are. He's a fantasy, but he's a perfect one,” she says. Or as Pierchala puts it, “The best way to describe Nick is ‘weirdly sexy.’ He doesn’t have a good credit score or good health, he has anger issues and a drinking problem, and yet, despite all that he’s really doing fine in life.”

Babalola believes that our collective thirst for Nick points to a larger change in the zeitgeist. “We are entering a new age of what a romantic male lead should be. We want realness, not perfection, we want a man who tries, and in the trying we see his affection,” she says. “Nick Miller actively seeks to elevate himself, but he also has a strong knowledge of self. He won't change, but he will grow to be better. That's f*cking hot.” Comedian Ashley Nicole Black and professed stan thinks he represents our forever ideal of a man, just fully realized. “Every girl loves a broken boy. But Nick Miller is a broken boy who isn't looking for a woman to fix him. He has all the bad boy qualities we secretly love, minus the one we really hate,” she says.

Yet when you challenge Nick Millerites of any stripe to distill what it is exactly about the character that does it for them, it all comes down to one universal truth. In the words of Nick’s Season 5 girlfriend Reagan Lucas (Megan Fox), he “kisses you like a coal miner greeting his wife.” It’s a sentiment that each subject Bustle interviewed for this story wholeheartedly agreed with. “Nick Miller is the sentient embodiment of the feeling you get when you get a bear hug from someone you fancy and you get to nestle your face in the crook of their neck. And did you see the kiss in ‘Cooler?’ The man knows how to kiss,” says Babalola. Thirst Aid Kit podcast co-host Nichole Perkins agrees that his kissing prowess can be traced back to that Season 2 episode. “The first kiss between Nick and Jess wrecked me. I’ll never forget it,” she says. “He also just looks like a really good kisser. It’s that raspy voice and nose.”

So how does actor Jake Johnson feel about all of the fanfare? (“Do you think Jake Johnson will read this? Is he single? Will he marry me?” Black asks.) While Johnson didn’t respond to Bustle’s request for comment, it was revealed he has been made aware of his recent virality. A fellow member of the hive, Maggie Manuel, did God’s work by sliding into his DMs to let him know he’d been trending. To which Johnson responded with a perfect, singular thumbs up emoji. The emoticon equivalent of Nick Miller’s goosebumps walkaway. Once again setting the bar so, so low, yet almost impossibly high.