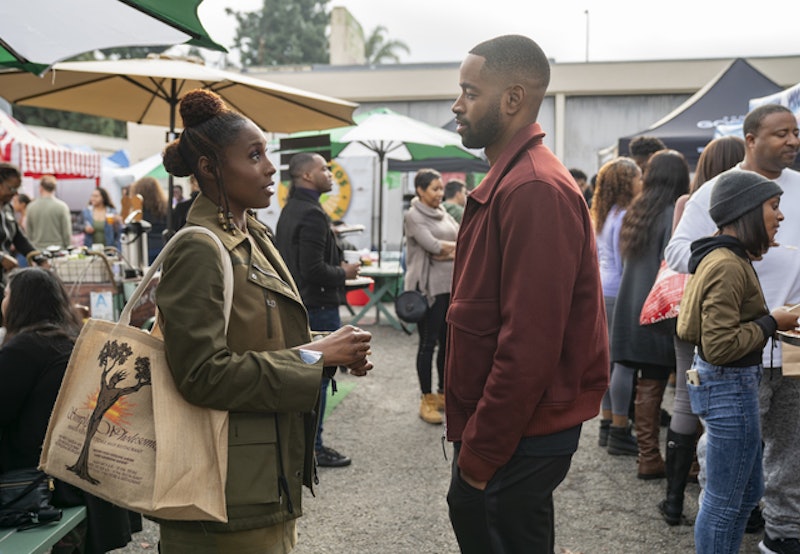 Spoilers ahead for Insecure’s Season 5 premiere.

Insecure’s favorite will they, won’t they couple has once again called it quits. In the closing moments of the show’s fifth season premiere, Issa (Issa Rae) breaks up with Lawrence (Jay Ellis) seconds before the credits roll. “Lawrence, I had a chance to think and um...” Issa begins tearfully. Lawrence looks back at her knowingly. “Yeah. Yeah, I know.”

It’s a far cry from where they ended Season 4, happily back together years after their messy breakup. There were complicating factors, like that Lawrence has taken a job 400 miles away in San Francisco and is expecting a child with his ex Condola (Christina Elmore). But ultimately, the split seems to be more about Issa’s desire — and frankly, need — to move forward instead of dwelling on a past that no longer serves her.

It’s a realization she comes to throughout the episode, which sees Issa, Molly (Yvonne Orji), Tiffany (Amanda Seales), Kelli (Natasha Rothwell) and Derek (Wade Allain-Marcus) return to Stanford for their 10 year reunion. At one point, Issa has a conversation with Mirror Issa, who appears as her college self. As college Issa probes current Issa about where they ended up, Issa slowly recognizes that she’s not where she thought she’d be in life, but that the things her younger self wanted aren’t necessarily right for her now.

Later, Issa appears on a panel to speak about her company The BLOCC (Black Life Opportunities Culture and Connection), but she comes across as less polished and less successful than her co-panelists. While the other speakers are able to pinpoint the exact moments they felt fulfilled, Issa expresses that she isn’t even sure she’s on the right path. It’s a fear that Issa later brings up in a conversation with Molly as the two reminisce about their early days at Stanford, almost as if reverting back to their younger selves as an escape from the uncertainty of their 30s. In doing so, they reconnect with an old college friend, Cheyenne (Taja V. Simpson), who they later admit they don’t even like.

In a comedic sequence, Cheyenne robs Molly and Issa, and it turns out to be the realigning incident Issa needed to imbue her life with direction. The morning after the robbery, she and Molly finally mend their strained friendship. “I don’t want to get stuck worrying about what I’m not or where I’m not. I just want to move forward,” Issa says.

This leads into the episode’s closing moments, when Lawrence picks Issa up from the airport. As the couple drives through the night chatting, their usual energy is replaced with an obvious stiffness. Though neither of them outwardly say it, there seems to be a mutual recognition that they’re clinging to a relationship that’s no longer right for them, and trying things long distance will only prolong the inevitable. In that moment, wordlessly, they too decide to simply move forward.