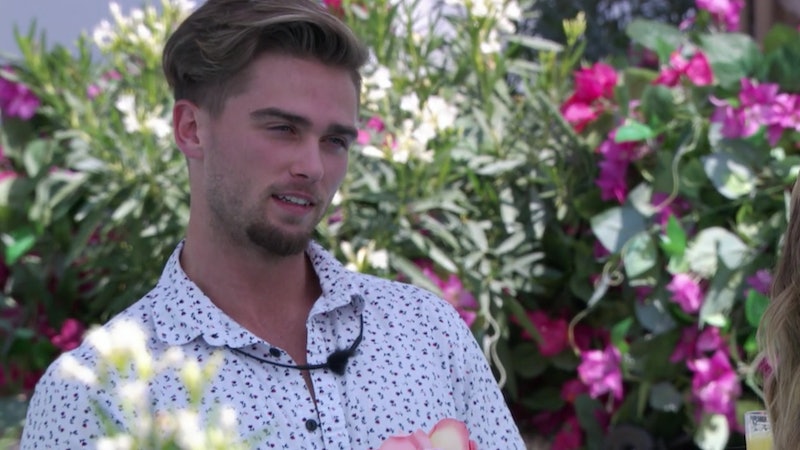 After being in the villa for only a few days, Love Island cast member Noah Purvis abruptly left the show. In Episode 25, narrator Matthew Hoffman announced his departure without further explanation. His bio was deleted from CBS.com and his presence removed from all Love Island social media.

“It has been brought to our attention that cast member Noah Purvis provided false information on his application to Love Island, which violates his contestant agreement. He has been removed from the show," CBS told Bustle in a statement.

On Love Island, Noah said he's a home health care worker pursuing his certification in massage therapy. On Instagram, he describes himself as a bodybuilder and ambassador for the Fitplan mobile app. He's also on YouTube, where he shares funny vlogs that feature his workouts, road trips, and more.

Since returning home, Noah says he’s attending therapy and is glad things unfolded the way they did. “I was lying to myself for a long time,” he adds. According to an Oct. 5 Instagram Story, he plans to share more about his past with his online following soon. “I’m not ashamed of who I am, I’m not ashamed of what I’ve done. I’ve gotten over it, and I’ve learned a lot of things from this process,” he said.

In a separate Instagram post, he captioned a mirror selfie: “Your past doesn't define who you are. You determine who, what, how and where you'll end up. I am truly proud of who I am today and excited for what is next! Stay tuned.....”

More like this
Molly-Mae & Tommy Fury Revealed Their Baby Girl's "Really Unusual" Name
By Sophie McEvoy and Sam Ramsden
Zach Explained Why He Had To Send Bailey Home Early On 'The Bachelor'
By Brad Witter
'Love Island' Has Added Yet Another Bombshell To The Villa
By Bustle UK
Yes, That's Christina From 'The Bachelor' In Taylor Swift's "Fifteen" Music Video
By Brad Witter
Get Even More From Bustle — Sign Up For The Newsletter
From hair trends to relationship advice, our daily newsletter has everything you need to sound like a person who’s on TikTok, even if you aren’t.

This article was originally published on Sep. 21, 2020