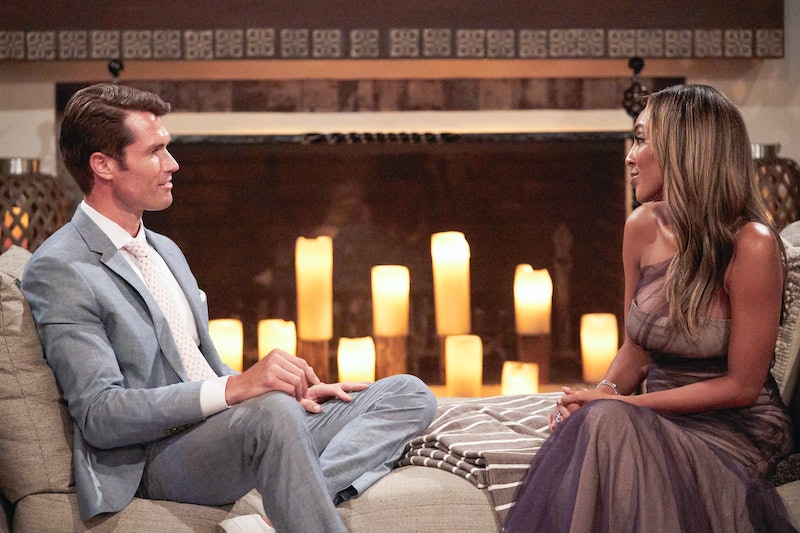 The Dec. 1 episode of The Bachelorette ended in a to-be-continued, two-on-one date between Noah, Bennett, and Tayshia. The two guys brewed a bold feud after Noah's entrance, and Tayshia ultimately ended it by sending self-care king Bennett home — or so she thought.

As she sent him home, Tayshia told Bennett that she didn't like his "condescending" tone toward Noah or that he questioned her integrity and decision-making because she was interested in the travel nurse. When she walked Bennett out, the Harvard grad asked, "Is this really a goodbye?" which hinted at what happened next.

After Tayshia returned from a group date with Riley, Zac, Brendan, Ivan, and Noah, she was met by a familiar voice outside her suite. "Hello, Tayshia," Bennett said, taking her by surprise. "How are you? It's great to see you," he added. The pair then went inside to talk, and he proceeded to pour out his entire heart right there on Tayshia's untidied floor.

"I spent all day going over and over in my head our parting,” he began, apologizing for questioning her feelings for Noah. “I was thinking of all these things I haven't been able to share with you.” Seemingly out of nowhere, Bennett then dropped the L-word. “I realized in that moment that I love you,” he confessed. “I couldn't leave without expressing that to you. You have every ounce of my heart, and I don't use that term lightly.”

Tayshia’s jaw dropped. “I'm not gonna lie, I'm like, speechless right now,” she uttered. Upon gathering a few thoughts, she admitted she still had feelings for him. "I was not planning on saying goodbye to you that night at all,” she said.

Bennett then stressed that he didn’t expect anything from her at that moment but just needed her to know how he felt. “I’m not expecting any answers or immediate epiphany,” he said. “I just wanted to see you again … I’m dead serious about you … I haven’t had emotions like this ever over a girl.”

This may come as a surprise to some, but she didn’t immediately reject him. “I think I personally have so much going on right now,” she said. “I don’t really know how to process this … I feel like I just need the night. Tomorrow I’ll let you know.” He ended the visit by trying to kiss her — a Bold Bennett Move that Tayshia stopped in its tracks. “Nice try,” she said before shutting the door behind him.

Now, the Bachelorette is faced with a difficult decision. While she's taking Bennett’s attempt to win her back seriously, she’s afraid of what the rest of the guys might think if he came back. If he does return, let's hope he reveals more steps of his luxe skincare routine and cuts back on the Noah jabs to focus on Tayshia.