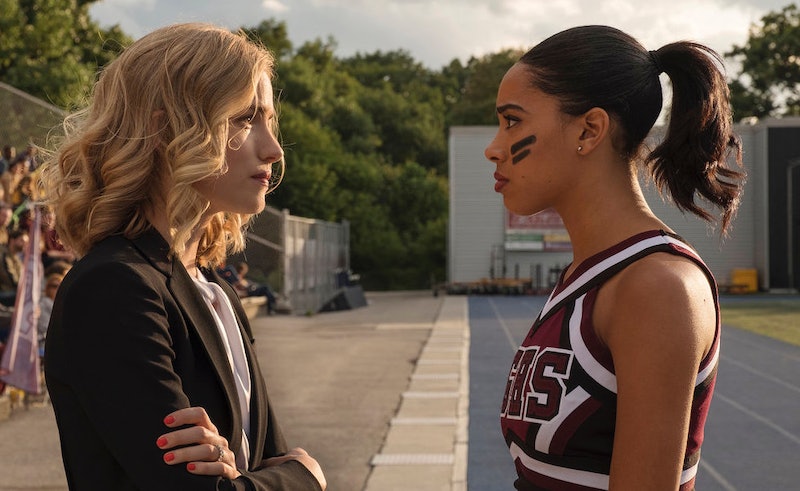 If you just finished marathoning USA's Dare Me — which recently arrived on Netflix — there's some bittersweet news. The bad? USA canceled Dare Me after one season in April, which means that cliffhanger ending won't ever get resolved onscreen. The good? The 2012 book it's based on gives some more clarity.

The end of the USA series heavily implies that Coach Colette (Willa Fitzgerald) murdered Sarge Will (Zach Roerig), who was found shot in Episode 7, only to reveal in the Season 1 finale that her husband Matt (Rob Heaps) helped her cover it up. But that's not the whole story: in the book, it's actually Matt who killed Will after discovering his wife's infidelity. He and Colette cleaned up the evidence and make it look like a suicide. But after Beth jumps from the top of the pyramid and severely injures herself in an act of desperation, Colette confesses to everything. With the Frenches out of the picture, Addy becomes the new cheer captain, and it's hinted that perhaps that is what she wanted all along.

While Sarge's murder didn't occur until over halfway through Season 1, the thriller's slow burn was by design. "I definitely wanted people to understand that you're not watching a typical crime show," series co-creator Gina Fattore told IndieWire in February. "We had the artistry of cheer, we had relationships among the women, we had all these other areas we could service and delay this happening. You see who people are before they're tested in this way."

Sarge's murder was just the narrative's catalyst. "I think crime is this great vehicle because it pushes people into extreme situations where they have to show you who they are, and that's great for character revelation," the co-creator said in an interview with Variety. "For Addy...she's put to the test when it gets to that extreme, and that's my fascination with crime: You push people to these pressure points and all of the masks come off."

Though those are themes ripe for more exploration — and the show obviously left room for more episodes — USA ultimately decided not to renew it. But perhaps its new life on Netflix will change their minds.

This article was originally published on March 8, 2020