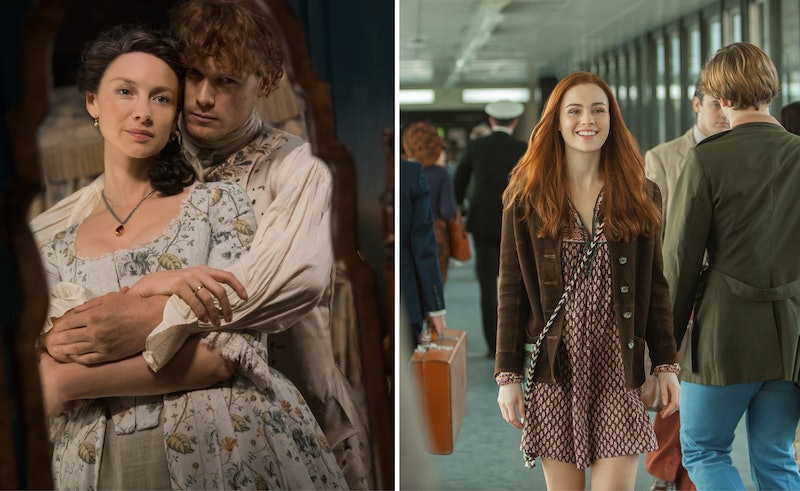 Fans have long been waiting to see Brianna and Jamie meet on Outlander, and Season 4 will finally include the much-anticipated moment. "I'm going back tomorrow to shoot that scene" actor Sam Heughan, who stars as Jamie, confirmed to Variety. "I just got the scripts two days ago, and we start shooting this week. This season, it’s a huge moment and will be the catalyst to a lot of the drama that unfolds."

Season 4 sees Jamie and Claire settling in America, where they embrace domesticity and do their best to create a new life for themselves in North Carolina. But as is always the case on Outlander, danger awaits them. The impetus that brings Brianna to the past is her discovery that their lives are at risk: she learns they die in a fire and goes through the stones to try and reroute history.

There, she meets her father for the first time, though Heughan tells Bustle that "[their relationship] doesn't run smoothly." Though Brianna is obviously curious about her biological father, she's "still dealing with the death of Frank, so finding out about Jamie ... is just exceedingly bad timing," says Sophie Skelton, who plays Brianna. "So she then has this guilt ... Inside she wants to just push Jamie away and never really have anything to do with him, but at the same time she wants to answer all of these questions she has about him."

Jamie is similarly conflicted. "It's very difficult for Jamie because he wants so much to be a parent, and to be a parent to Brianna. But when she arrives in his life, she's an adult," explains Caitriona Balfe, who stars as Claire. "As much as he wants to be a father, the needs of an adult are very different from the needs of a child. That's a very difficult balance for him to be able to strike."