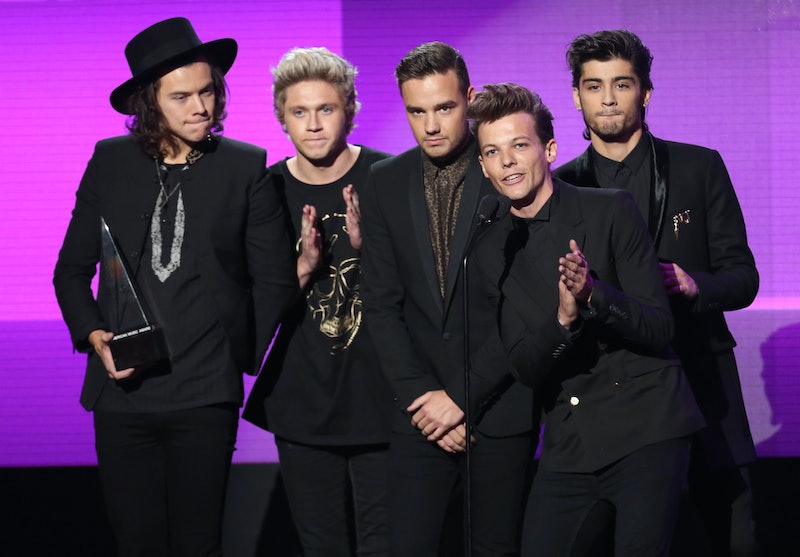 The band may have split up officially five years ago, but the One Direction fanbase is still alive and well – and desperate for a reunion. Well, it seems like former band member Liam Payne has got the memo as he recently dropped a *major* hint that something may be in the works. But does this really mean that One Direction will reunite in 2021? Or are we getting excited over nothing? It's time to piece together the puzzle of these reunion rumours.

January 2020: The First Mention Of An Anniversary Project

Hardcore fans will have known that One Direction had their tenth anniversary in July 2020. According to reports at the time, Payne was quoted in a Tumblr post as speaking about “a documentary around an anniversary” at an event to promote his album LP1. While nothing came to fruition, it certainly planted the seed in fans’ minds.

Harry Styles has been super successful since leaving One Direction and, in 2020, the “Kiwi” singer was set to start a 26-date tour across Europe in summer 2020. However, in March that he, he announced that, due to lockdown, Love On Tour would have to be postponed until 2021. Some hopeful Directioners optimistically commented that this move may have freed up some time in Styles’ schedule for a more... collaborative project, perhaps? Again, nothing came to be, but it got the rumour mill got going once more.

While some of the boys have previously talked about their desires to get back together, it wasn't until Payne appeared on James Corden’s chat show in April 2020 that we got the biggest hint of 2020. In answer to a question about a possible reunion, Payne said, “I'm not allowed to say too much obviously, because I'd be giving it away, but we've been speaking a lot more at the moment.” He also added, “I think that we're all feeling that that ten year[s] is a very special moment."

Payne teased fans yet again during an interview on April 19 2020 when he took to Instagram Live with DJ Alesso following the release of their new single "Midnight". While initially set up to discuss new music, it was no surprise that fans were eager for more 1D reunion info.

“Oh my God dude… there’s so many One Direction questions,” Alesso said reading the comments as they appeared. “But I feel like I don’t want to put you on the spot because I know you can’t say much.” Payne went on to reveal that he and Niall Horan had been FaceTiming each other, and that they’d all been trying to arrange a group FaceTime seeing as they’re mostly all in London at the moment.

“I can’t say too much. Louis told me off for revealing our plans the other day, so you’re going to have the group chat telling me off,” Payne told Alesso. So it looks like the 1D reunion is somewhat official, just lacking on deets.

He also vaguely mentioned Zayn Malik’s involvement (or lack thereof), saying that Alesso could “come in and fill in for Zayn and join the band.” It kinda looked like Malik wouldn’t be part of the reunion after all, but time will tell.

Unfortunately, 2021 has been a little quiet on the reunion info front, and some things we have heard have not been all that positive. For example, in May 2021 on the Jonathan Ross Show, Horan explained that he wouldn’t be up for reuniting “unless everybody was completely in,” and that all “having the same opinion about it would be hard.

“I don't know… no one really talks about it,” he added. “There's a couple of little babies from them lads. Everyone's having their own success on their own. I'm enjoying what I'm doing.”

He didn’t finish off all our dreams though, finishing: “Of course, if everyone wanted to do it, I'd be down for it… you kind of need to all get in the same room and have the chat, but I don't know when that would be…”

Fear not; Payne is back on hand to provide some much-needed hope to the situation. In an interview with The Mirror, the singer revealed he had actually recently been talking to Louis about the reunion once more, and that the two had agreed it should happen “sooner rather than later.” Keep those fingers crossed...