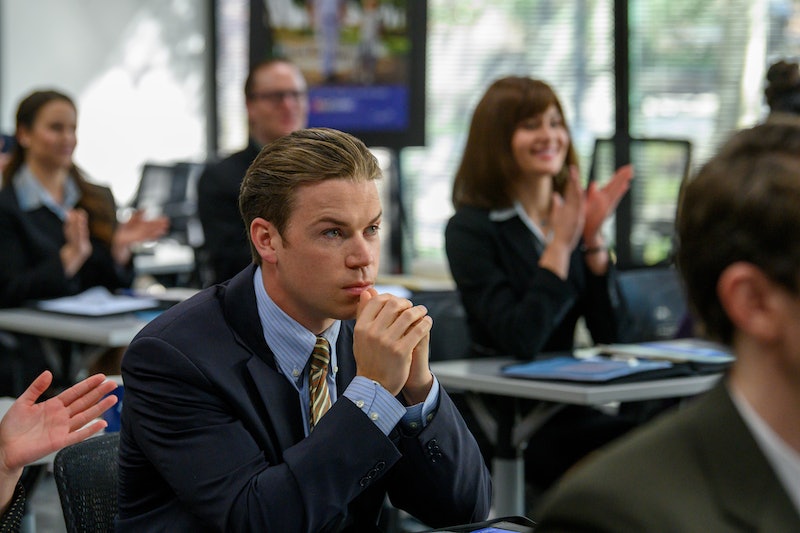 In 2014, the British public named a fresh-faced Will Poulter that year’s BAFTA Rising Star. With subsequent acclaimed performances in 2017’s Detroit, the Oscar-winning The Revenant, and 2019’s Midsommar, the actor has certainly lived up to this accolade.

Poulter’s next major role is in Danny Strong’s Dopesick. Based on Beth Macy’s best-selling 2018 book, Dopesick: Dealers, Doctors and the Drug Company that Addicted America, the series recounts the devastating origins of America's opioid crisis.

While spotlighting the human cost of OxyContin addiction in the United States, the eight-part drama also explores the uphill battle of holding those responsible for the crisis to account. Specifically, the pharmaceutical giant Perdue Pharma, who are accused of disingenuously promoting the drug in the late 1990s across small-town America to ensure its success.

In Dopesick, this harrowing chapter of the all-too-real story is brilliantly depicted by Poulter, who portrays the fictional Perdue sales representative, Billy Cutler. Viewers meet Billy as he grapples with the moral dilemma of advancing his own career to the detriment of others while pitching a so-called “miracle drug” to doctors in Appalachian mining towns. In spite of his obvious flaws, Poulter says the character is “necessary.”

“He represents those individuals from throughout history who maybe didn’t take a stand early enough and inadvertently upheld a culture of deceit and bribery. There’s something to learn from that,” the actor says of his latest role over Zoom. Although, taking on a character of this nature came with its challenges. He recalls: “Playing a character who is that duplicitous is actually quite disturbing, you know?”

Poulter’s portrayal of Billy wasn’t inspired by any one particular person. Instead, he embodied the mindset of the character. An approach that led him to the pages of Dale Carnegie’s 1936 self-help book, How to Win Friends and Influence People. “I imagined that a young sales rep in the ‘90s would read a book like this.” He continues, “It’s always been cited as promoting self-development in a healthy way. But, nowadays, it retrospectively reads like a manual on coercion and deception.”

Starring alongside Poulter in Dopesick’s “insanely talented” cast are Michael Keaton (Spotlight), Peter Sarsgaard (An Education), Kaitlyn Dever (Booksmart), and Rosario Dawson (Sin City), among others. “Working opposite Michael Keaton was a dream come true,” the actor recalls. “He was quite nurturing and fatherly on set. I think that interesting father-son dynamic is somewhat mirrored in our scenes together.”

Poulter has big hopes for the series, too. “I want the show to remind people that empathy is needed for those who suffer from the disease that is addiction.” He adds, “We need to course-correct the narrative that victims of opioid abuse are somehow the villains of this story. In my opinion, Purdue needs to be held accountable for its part in this crisis. They’ve been able to evade any real retribution.”

With the arrival of Dopesick and a string of “exciting” projects in the pipeline, including the upcoming thriller The Score and Hugh Laurie’s Why Didn't They Ask Evans?, Poulter is among the most promising British acting exports of the past decade. This growing international recognition is not something the actor takes for granted. “I've been lucky enough to work all around the world. It’s such a huge privilege,” he says.

With his entry into the Marvel Cinematic Universe as Adam Warlock in the forthcoming Guardians of the Galaxy Vol. 3, Poulter’s star is set to rise further. “The news is only just sinking in for me.” He adds, “I auditioned for the role in June and I’m grateful to have gone through that whole process and come out the other side with a part.”

Poulter is also humbled at being welcomed into a franchise he holds in such high regard. “I’m genuinely really honoured and particularly excited to be involved with Guardians. Those films as being some of the most creative and unique aspects of the MCU.”

Despite his expanding itinerary, the We’re the Millers star still finds time to enjoy the work of his peers, as well as his own. “To be honest, I have been watching a lot of Dopesick, as narcissistic as that sounds [Laughs]. I’ve also been really into the second season of On the Spectrum which is just wonderful.”

Although, for Poulter, the third series of RuPaul’s Drag Race UK is the one to watch. “Choriza May is my hero,” he gushes.

Dopesick arrives on Disney Plus UK on November 12.