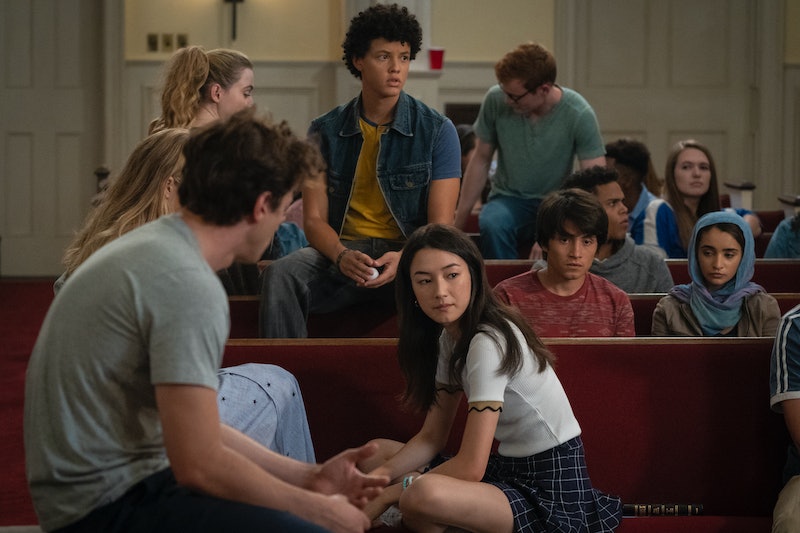 Netflix's teen drama, The Society, ended with a lot of mysteries yet to resolve: namely, the fact that we still don't know how the teens of West Ham ended up in a version of their town where everyone else had mysteriously vanished. The ending of the first season seemed to suggest they were in an alternative universe or some kind of purgatory, cutting back to the original West Ham, where a plaque had been put up in remembrance of the missing teens. The show's second season, which was greenlit two months after its 2019 premiere, would assumedly bring us (and the teens) closer to some answers, but Netflix retroactively canceled The Society in August after the coronavirus pandemic stalled production.

“We’ve made the difficult decision not to move forward with second seasons of The Society and I Am Not Okay With This,” Netflix said in a statement to Deadline. “We’re disappointed to have to make these decisions due to circumstances created by COVID, and we are grateful [to both shows' creators]."

Society creator Chris Keyser has since spoken out about the cancelation, telling Deadline that "saying goodbye so abruptly was the hardest thing I’ve had to do in all my years making shows" and confirming that Season 2 would have resolved some loose ends. "As for this next season, there were more answers to the question, 'Why were the children of New Ham taken and how might they find their way home?'” he said. “And, triggered by an event that has (quite by accident) eerie parallels to the current crisis, the citizens of New Ham would have found themselves spiraling toward war with each other."

Keyser added that he's still holding out hope that the show will be able to continue someday, but in the meantime, here are six other shows like The Society you can stream if you're still mourning the show's loss.

I Am Not Okay With This

Though another short-lived show that got the ax from Netflix amid coronavirus concerns, I Am Not Okay With This is still worth the watch. Adapted from Charles Forman's comic series of the same name, it stars It's Sophia Lillis as "Syd" Novak, a 17-year-old girl who suddenly discovers she has telekinetic powers. It's just as gritty as The Society and, at only seven 30-minute episodes, makes for a quick afternoon marathon.

Like the kids on The Society, a normal teenage life is not in the cards for Sasha, a heart transplant recipient who becomes haunted by her donor in this 2019 horror series.

This show is a classic fish-out-of-water story about three working class friends thrown into the world of the wealthy elite — but with a lot of drama, sex, and murder.

On My Block is an at times charming, at times heartbreaking exploration of four Los Angeles teens coming of age in a rough inner city neighborhood.

In this sleepy but addictive sci-fi series, teen independence comes in the form of two star-crossed lovers who run away from home to be together.

This article was originally published on May 10, 2019