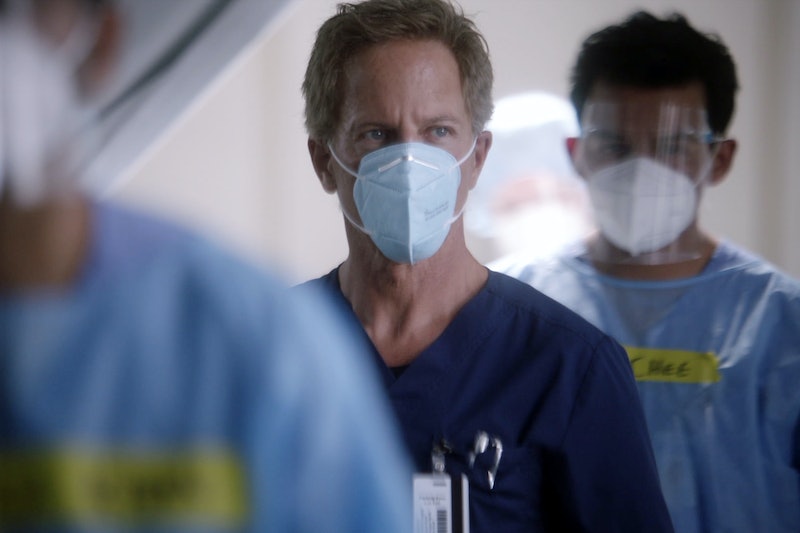 Grey's Anatomy fans have been worrying that Meredith might die this season, but it may actually be a different character who meets their demise. The promo for the Dec. 10 episode shows that Tom Koracick's COVID case has taken a turn for the worse and he's been hospitalized. All of the other doctors seem pretty worried about him, and they would know when to worry after dealing with this crisis for weeks. "He saved my mom's life," Jackson says sadly when he hears about Koracick's condition. "I know, mine too," Amelia replies.

With Grey's Anatomy tackling the pandemic that's already killed nearly 300,000 people, it seems unlikely they would shy away from showing how fatal the virus can be. Right now, Meredith and Koracick are the only two doctors who have tested positive, and Meredith is on the mend in the new promo while his Koracick's case has worsened. Plus, some fans have theorized that Koracick ends up on the same dream-like beach as Meredith as they both fight for their lives. Many think that's where he'll see his late son. Their reunion could be what encourages Meredith to fight harder to stay with the children she still has, while Koracick steps into the proverbial "light."

Him dying would also send a message to anyone still not taking the pandemic seriously. When Koracick was first infected, he was so cocky that he took more than one test to try to prove that it was a false positive (it wasn't). His condition worsened suddenly over the course of Episode 4, which is how it's been for many people. They feel fine one minute and the next they're hospitalized. By the end of that episode, Koracick was huddled on the floor sweating and shaking. Clearly he gets bad enough to be brought into the hospital, where the promo shows that he is anything but his usual overconfident self.

Killing Koracick also solves a practical problem for the series, because his storyline has really run its course over the last couple of seasons. Though there was a period of time when fans thought he might wind up with Teddy, she's made her choice — and she picked Owen. There's not a whole lot left to explore for Koracick's character, and he may become the sacrifice the show needs to demonstrate the seriousness of this illness.