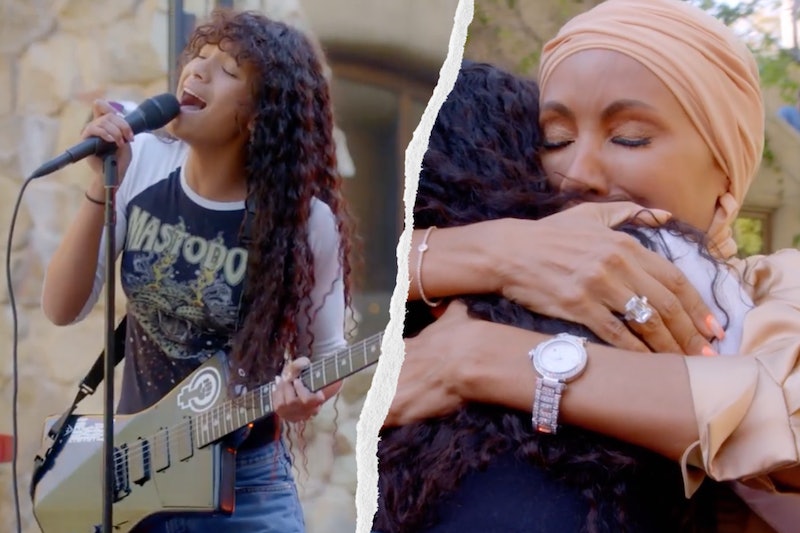 Did you know that Jada Pinkett Smith used to be in a rock band? Her daughter certainly did. Willow Smith surprised her mom Jada by reuniting her 2000s nu-metal band Wicked Wisdom as a Mother’s Day present, and the actor’s reaction to seeing her daughter perform her old song was pure joy.

On the May 5 episode of Red Table Talk on Facebook Watch, Willow recalled when she and her brother Jaden accompanied their mom when she toured with Wicked Wisdom in the early 2000s, even showing home videos of her and Jaden washing the outside of their tour bus. “This is the music that I grew up around,” she said. “My mother was Superwoman, she was a rock star, she was a warrior and a nurturer, all in one. So unapologetically badass. I was my mom’s biggest fan. She was a rockstar, and I was living for Wicked Wisdom.”

After paying tribute to her mom at the red table, Willow asked Jada to come outside, where her original bandmates were waiting on a stage set up in the driveway. With Willow on vocals, they played the band’s hit “Bleed All Over Me” as Jada and her own mom, co-host Adrienne Banfield-Norris, teared up and jammed out. “I felt like it was only right for me to pay homage to a time in her life because she showed me what womaning up really is about,” Willow explained. Jada posted the performance and shared her gratitude on Instagram. “My heart burst in a thousand different ways having my daughter honor me in this way,” she wrote. “I love you, Willow.”

Willow recently took a punk-rock turn on her new single, “Transparent Soul,” featuring Travis Barker, which was undoubtedly inspired by her mom’s music. “Just hearing my mom sing that music and the energy that I experienced when she was on stage and that whole vibe, it was just so intoxicating to me, but I felt like I could never do it,” she told Apple Music’s Zane Lowe in a recent interview. “I felt like my voice wasn't made in that way. When COVID hit and I just had all this time on my hands, I was like, ‘Let me try and go through this fear and actually prove to myself if this is a genre I can do.’” Rock certainly runs in the family blood, as evidenced by Jada and Wicked Wisdom’s “Bleed All Over Me” song and music video.

It’s been a busy week not just for Willow, who said she had been rehearsing with the band for the surprise performance all week, but for her dad as well. Will Smith posted a photo of his latest body transformation on Instagram, saying that he was in “the worst shape of his life.” Of course, everyone still commented on how good he looked, with stars like Mark Wahlberg and Jamie Lee Curtis celebrating his new “dad bod.” It only goes to show that the Smiths continue to kill it no matter what they do — or what shape they think they’re in.