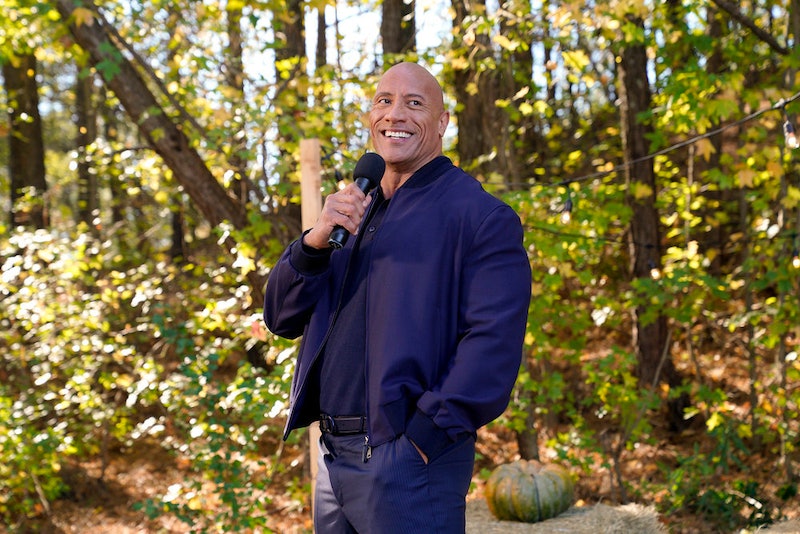 Dwayne "The Rock" Johnson has a lot of wild life stories. (Remember that time he somehow found out about Osama Bin Laden's death before anyone else?). Now, he's turning them into a TV Show: Young Rock, a new NBC sitcom billed as "The Rock's true life story."

The show covers three distinct periods in Johnson's life, which he told the New York Times he considers his "defining years." Adrian Groulx plays him at age 10, Bradley Constant plays him at 15, and Uli Latukefu plays him at 18. Johnson will also appear as a future version of himself reflecting back on his formative years.

Because the show is telling his life story, Johnson wanted to be as hands on as possible. He told the NYT that working on the project was "unlike anything I've ever participated in, it required real specificity and an attention to detail." Part of that attention to detail was casting, which Johnson was very involved in. "I was able to spend some time with [the actors], prior to shooting, and let them know what I was like during that time. What I thought my priorities were. The times, more important, that I fell on my ass and I had to get back up."

In an interview with USA Today, Johnson compared his surreal childhood — moving from Hawaii to Tennessee and later becoming a University of Miami football player — to the plot of Forrest Gump. "The confluence of wild personalities that came in and out of my life during these times, all these years, are just fascinating," Johnson said. "From my heroes Andre the Giant to Muhammad Ali to Ronald Reagan ... It was almost as if I'd been told I had the childhood of Forrest Gump, where people weave in and out of my life."

But it's showing how he got to where he is today that Johnson is most excited about. "My mom was my Young Rock consigliere throughout," he told the NYT. "She felt we could showcase the tough sh*t and the hard sh*t because we got through it. That's the lesson. Hopefully, people who are going through some hard sh*t, too, can see that there's a way out. You can get on the other side of it."

More like this
ITV's 'Maternal' Was Inspired By A Very Simple – & Unanswerable – Question
By Maxine Harrison
Shonda Rhimes Responded To The Surprise Exit Of A Day 1 'Grey's Anatomy' Figure
By Grace Wehniainen
Everything To Know About A Potential 'Lockwood & Co.' Season 2
By Gretchen Smail
This 'Gossip Girl' Wardrobe Error Has Gone Viral On TikTok
By Alyssa Lapid
Get Even More From Bustle — Sign Up For The Newsletter
From hair trends to relationship advice, our daily newsletter has everything you need to sound like a person who’s on TikTok, even if you aren’t.