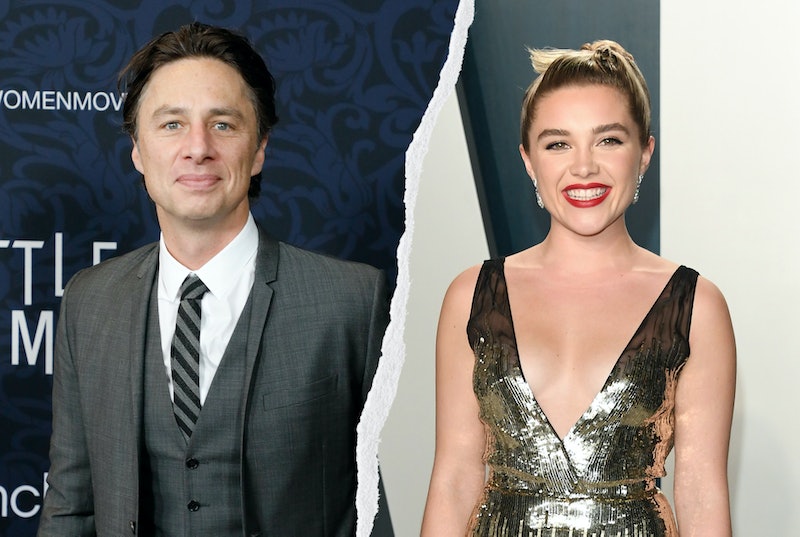 Zach Braff and Florence Pugh's relationship is still going strong — and the proof is in a single birthday message. Braff posted on Instagram to celebrate the Little Women star's 25th birthday on Sunday, Jan. 3, calling his girlfriend a "gift to the world." "Happy birthday to the most fun person I've ever met," the former Scrubs actor wrote alongside a series of photos with Pugh. "I would have felt blessed to have smiled with you for one night. I can't believe I get to giggle with you every day."

The photo carousel included pictures of Pugh by the Hollywood sign, a selfie of the couple on an airplane, and an image of them posing together on a hike. "What a gift to the world it was that you were born," Braff added. Pugh, for her part, shared Braff's post on her story and captioned it with a heart emoji. The Midsommar star also shared videos of herself dancing and posing with balloons, writing, "ITS MY BIRTHDAY!!!!"

The couple, who have been linked since 2019, first met on the set of Braff's short film In The Time It Takes to Get There, according to People. In Oct. 2019, Braff shared a photo of Pugh along with three of his friends on Instagram. "People I love," he captioned the post. The two have since been candid about their relationship on social media; in April, Pugh shared a photo of Braff lounging at home on his 45th birthday. "Happy Birthday wishes, boogies, and cheers for this special person," she wrote.

In the past, the two stars have faced a lot of criticism over their 20-year age difference. In April, Pugh pushed back at critics with a video on Instagram addressing the hate she received for her birthday post to Braff. "I do not need you to tell me who I should or should not love, and I would never in my life tell anyone who they can or cannot love," she said. "It is not your place, and really it has nothing to do with you."

In November, Braff discussed Pugh's message to her followers in an interview with Mr Porter magazine, noting that he chose not to further indulge the hate after hearing her statement. "She literally sat down, hit record on her phone and said that," he told the publication. "I thought, 'How could I possibly follow anything as intelligent and articulate as that?' So, I chose not to."

More like this
Demi Lovato's New Song "29" Hints At Their Age Gap From Ex-Boyfriend Wilmer Valderrama
By Jake Viswanath
Tyler Perry’s Birthday Note To Meghan Markle Mentioned Struggles She’s Overcome
By Brad Witter
Kim Kardashian & Pete Davidson’s Relationship Timeline From Start To Finish
By Jordyn Tilchen and Bustle Editors
Who Is Bad Bunny Dating? Gabriela Berlingeri's Vocals Are Featured On His Song "En Casita"
By Radhika Menon
Get Even More From Bustle — Sign Up For The Newsletter