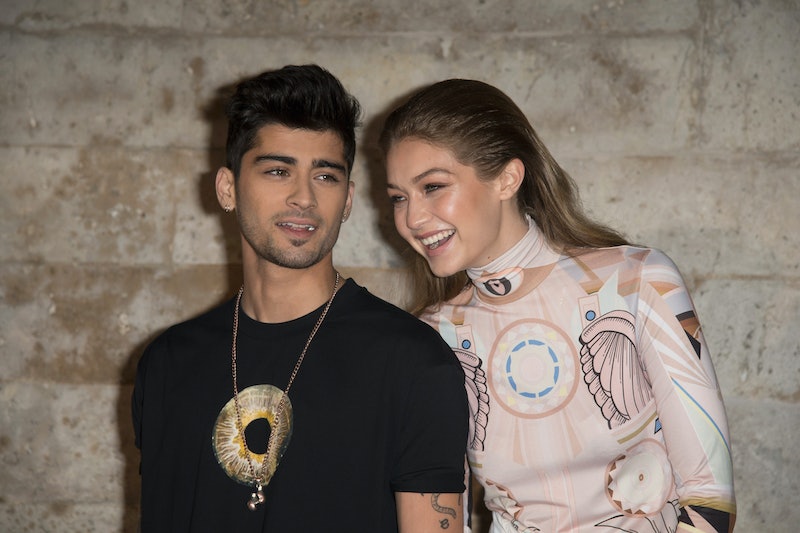 Just a few months after the birth of their daughter, Zayn Malik and Gigi Hadid might be embarking on a new relationship milestone. The singer released his long-awaited sophomore album, Nobody Is Listening, on Jan. 15, and the track "When Love's Around" grabbed fans' attention for its romantic lyrics that may hint at an engagement.

"Never feel that type of way / But I need you in my life," Malik sings in the second verse. "Yeah, you could be my wifе for real / Only takes a woman / To show you what it means to lovе." In the bridge of the song — which features The Internet frontwoman Syd — Malik sings that his partner is giving it their all and that he's "fallin'" for them, which has also convinced fans that the track is about Hadid.

The former One Direction star has not yet shared the inspiration behind his new music, but that hasn't stopped fans from searching for clues about his relationship in the lyrics. For example, the album's penultimate track, "Tightrope," has also sparked conversation about how committed the pair is to one another. "Something told me it was you," he sings on the chorus before shedding some light on their romance in the second verse. "We are who we are when we're alone / Baby, I'm ready, any minute we might fall / Lately, I feel like my grip is gone / But you got my arm."

Though he often shies away from talking about the meaning behind his songs, Malik has opened up about the supermodel's influence on his music in the past. In 2017, he confirmed that his song "Let Me" was written about Gigi even though they were broken up at the time. "I was in love, and I think that's pretty evident," Malik told Ryan Seacrest at the time. "I was aspiring to be in love with someone for the rest of my life and the rest of theirs, as we all do. Things change and we move forward in life."

Malik and Hadid — who have been dating on and off since 2015 and welcomed a baby girl in September — haven't been shy about sharing their rekindled love for one another on social media. "Happiest birthday to our Zaddy baba," Hadid wrote on Jan. 13 as part of a birthday tribute to her partner on social media. "[You're] so special. Love you long time, thank you for makin me a mamma to the best girl ever."

Even if they aren't ready to tie the knot just yet, the couple is reportedly happier than ever and enjoying time with their baby girl out of the spotlight. "Zayn and Gigi's relationship is better than ever — their communication, the time they spend together," a source told Us Weekly in October, shortly after they became parents. "They've never looked happier ... [They] are loving parenthood and can't get enough of their little girl."