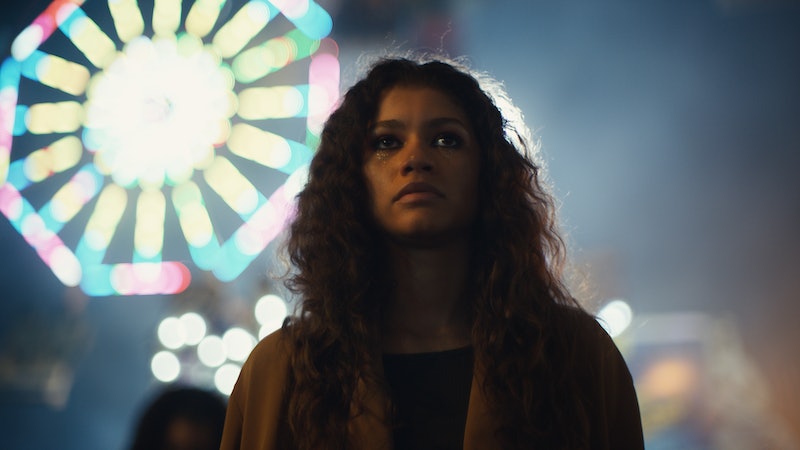 Update: Zendaya confirmed on Instagram that two special episodes of Euphoria are coming. The first will air Dec. 6.

Earlier: Even though production on the hit series has been postponed by the coronavirus pandemic, Zendaya teased new Euphoria episodes might arrive before Season 2, with showrunners hoping to film some "bridge episodes" that can be shot without putting anyone at risk. On Thursday, Zendaya discussed Euphoria's future in an extensive interview with InStyle, revealing that the second season of the popular HBO show is written, but has not yet entered production.

Zendaya confirmed that it's been hard to be away from the Euphoria set, saying, "I do miss Rue." She added that the character is, "like my little sister in a lot of ways" and that "going back to that character is a home base for me." The Dune star also offered an update on Season 2, saying that even though there is a "beautiful second season that has been written" the creators and cast decided that, "in order to do it the way we want to do it, we need to wait until it's safer."

Fans of Euphoria will likely to be disappointed to hear there are no new episodes set to be released, but Zendaya did offer some consolation, confirming that there is, "an idea to do a couple of bridge episodes that can be shot safely but aren't necessarily part of Season 2." She added: "So, hopefully, we will be able to do those in the coming months. I can't wait."

Euphoria may be on an indefinite hiatus, but Zendaya has continued to collaborate with the show's creator, Sam Levinson, throughout quarantine. Levinson and Zendaya made a film titled Malcolm & Marie amid the pandemic, adhering to social-distancing measures throughout the production. On Thursday, Zendaya discussed the unconventional filming process for the project with InStyle, revealing that the actors fronted the money themselves and worked with several producers from the Euphoria team. "Everyone had to quarantine and get tested in order to shoot in isolation," she said. Then she added that the unusual circumstances of the film's production were educational, saying: "I think we were able to create something really special. And I'm grateful that we learned how to do it on our own."

In July, Euphoria picked up six Emmy-nominations, including an Outstanding Lead Actress in A Drama nomination for Zendaya, which is a first for the actor. On July 28, Zendaya posted about the Emmy nomination on Instagram, writing, "I'm honestly speechless, my heart is just overflowing with love and gratitude." She also thanked the cast, crew, and fans of the show, writing, "We out here Emmy nominated y’all!!" While Euphoria continues to accrue both critical acclaim and devoted following, it's not clear when the new season or potential bonus episodes will film, but fans can take comfort in knowing that Zendaya is just as eager to return to set as fans are to watch new episodes.

This article was originally published on Aug. 9, 2020