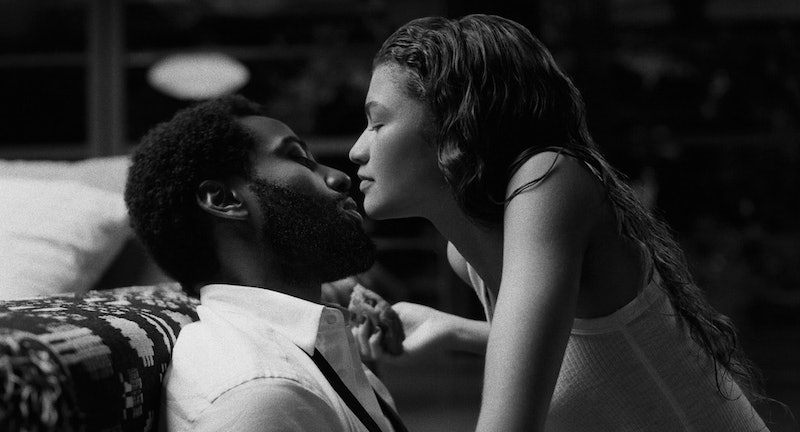 Director Sam Levinson's romance drama Malcolm & Marie might not be out yet, but Zendaya's fans are already prepared to give her an Oscar for her performance. Netflix released the first trailer for the movie — filmed in quarantine and in black-and-white — on Friday, Jan. 8. John David Washington and Zendaya take on titular roles in the film, out on Feb. 5, as a filmmaker and his girlfriend whose relationship is tested after they return from his movie premiere and await reviews from critics.

Along with praising the cinematographer Marcell Rev (who also does the cinematography on Euphoria), fans on social media are rallying behind Zendaya in hopes that she'll be able to pick up another major award after her 2020 Emmy win for her role in the HBO hit series. According to Variety, Netflix is already planning an Academy Awards campaign for Malcolm & Marie, too, bringing fans' Oscars dreams one step closer to becoming a reality.

The campaign will surely delight fans on Twitter, who clearly think she should be nominated in the Best Actress category.

Oscar win or not, another Twitter user maintained that the Zendaya hive has already won.

Elsewhere on Twitter, the discourse turned to Zendaya's command of white tank tops in both her work and personal life.

Zendaya and Levinson teamed up for Malcolm & Marie shortly after Season 2 of Euphoria was suspended last March due to the ongoing coronavirus pandemic. "It's basically kind of birthed within quarantine conversations Sam and I had in wanting to create something safely," Zendaya said in an interview on the OTHERtone with Pharrell, Scott, and Fam-Lay podcast last month. "I really wanted to be creative and I hadn't worked in a long time, through that year anyway. The last thing I acted on was Euphoria, and I had a year of not really doing any acting. I really missed what I loved."

"I was like, 'Listen, I'll do whatever,'" she continued. "[They] had some weird ideas, like, 'We can literally shoot something in your house. We could shoot in my house and see if we come up with something,' but it kind of turned into something a little bit more special than that."