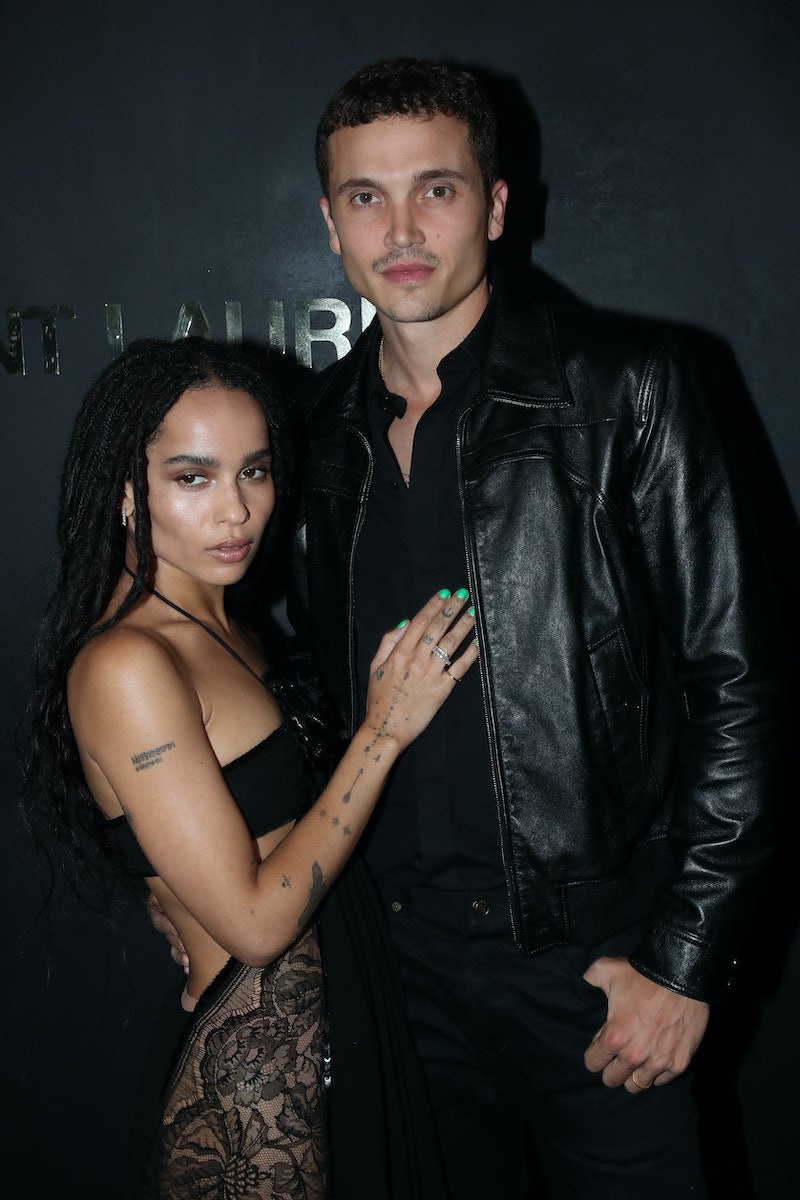 A celebrity marriage is being left behind in 2020. Zoe Kravitz filed for divorce from husband Karl Glusman on Dec. 23, and People reported on Jan. 2 that her rep had confirmed the split. Kravitz and Glusman, who were first spotted together in 2016 and married in June 2019, have been married for 18 months. Neither has commented on the breakup so far, but the High Fidelity star did post an interesting Instagram story that may have said it all.

Kravitz tends to keep her personal life private, so it isn't a surprise that she hasn't opened up publicly about her reasons for filing for divorce. However, the actor shared a meme on her Instagram story on Saturday showing "the universe" dumping trash in a dumpster, with the bag labeled, "People places and things that no longer serve my greatest and highest good," per Page Six. Kravitz added, "Mood." Nothing explicitly linked the post to Glusman, but the timing of her relationship's end going public and the post seemed telling.

Aside from her story, the actor has been posting photos showing she's taking in the "little things" right now. She posted several images on Saturday with the caption, "New year. little things," including a selfie. Meanwhile, Glusman, who is best known for his role in the controversial drama Love, has also refrained from addressing the divorce. That said, he posted a video showing a beautiful sunset on Dec. 28, writing that the sun was setting on an "eye-opening year."

The actor pair wed in June 2019 in Paris. Kravitz, who is the daughter of musician Lenny Kravitz and actor Lisa Bonet, held the ceremony in her father's mansion, according to People. The two were first linked after being photographed leaving the Fat Radish restaurant in New York City and attending a Kings of Leon concert in October 2016.

Later, in 2018, the Big Little Lies star opened up about their engagement in an interview with Rolling Stone, telling the magazine when the reporter spotted her ring, "Oh yeah, I’m engaged." The star went on to admit the couple wanted to keep the romance out of the spotlight. “I haven’t told anyone yet — I mean, I haven’t told the world," Kravitz added. "I wanted to keep it private.” The actor did reveal that Glusman intended to propose in the City of Light but opted for something more casual, telling the publication, "I love that it wasn’t this elaborate plan in Paris. It was at home, in sweatpants."

Kravitz posted a wedding anniversary tribute on Instagram in June, sharing a picture of the couple on their big day and writing, "One year." The actor also kept up a photo of Glusman from his birthday last year on Instagram, with the caption, "Happy birthday butthead. i love you more than you know." Glusman, on the other hand, has deleted all of his old posts in the wake of the announcement, and shared vague musings on social media, including his "eye-opening year" video.

More like this
Leona Lewis & Husband Dennis Jauch Welcomed Their First Child
By Darshita Goyal
Who Is Camila Cabello Dating? She's Getting Cozy With Lox Club CEO Austin Kevitch
By Radhika Menon
Kim Kardashian & Pete Davidson’s Relationship Timeline From Start To Finish
By Jordyn Tilchen and Bustle Editors
Who Is Bad Bunny Dating? Gabriela Berlingeri's Vocals Are Featured On His Song "En Casita"
By Radhika Menon
Get Even More From Bustle — Sign Up For The Newsletter