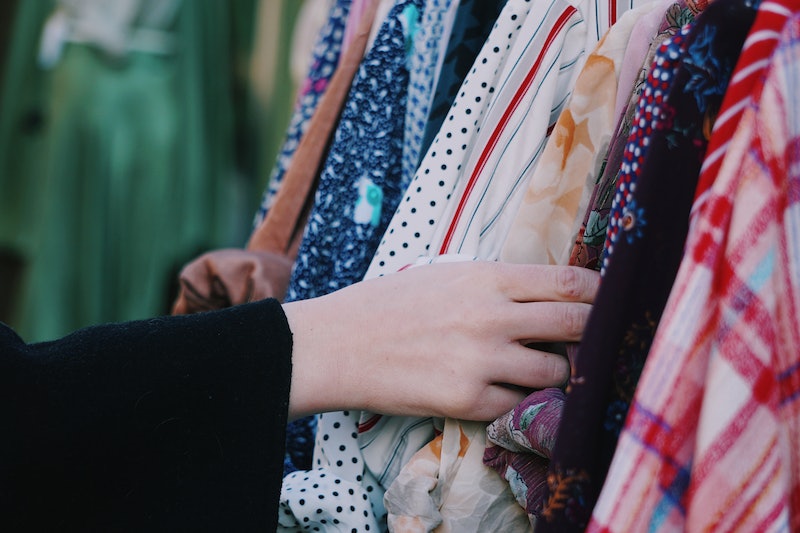 We’re three lockdowns down by England is (thank god) gradually reopening. Right now, sorting belongings you may have accumulated over the past year seems like a productive use of time but, with some restrictions still in place, we're wondering, can you still donate and recycle old clothes during lockdown?

It’s a question worth asking. After another lockdown was announced back in January 4 2021, thousands of charity shops and recycling centres across the country were forced to close their doors (again) in accordance with new countrywide restrictions. However, following the government’s COVID-19 roadmap announcement in February, England permitted non-essential shops and charity shops reopen from April 12 and people are finally able to finish some of their lockdown organisation and donate to their favourite charities.

Oxfam, Cancer Research, BHF, Barnadoes, and more are gradually reopening their high street stores in England after charities had to adhere to restrictions and close stores throughout England, Scotland, Wales, and Northern Ireland for lockdown 3.0.

However, while many of the high stores are reopening across England, be mindful that Wales, Northern Ireland and Scotland branches could vary.

On April 12, Barnados announced it would be reopening all its shops in England and Wales, and in Scotland on April 26, meanwhile shops in Ireland will stay closed. The Red Cross says all its England and Wales stores are open, with its Scotland branches expected to reopen April 26 and Northern Ireland April 30.

Oxfam, which had to close 650 high-street stores due to the pandemic last year, also announced that its shops in England and Wales are now open, however shops in Scotland and Northern Ireland remain closed.

To find out if your local clothes recycling facility is open, it’s best to check your local council’s website. However, as Love Clothes reports many recycling facilities have been overwhelmed during previous lockdowns, and organisations ask that you don’t leave bags of unwanted clothes and textiles next to full recycling bins.

How can I support my local charity shops during the pandemic?

Donate, but be mindful

After urging people to “save donations” over lockdown, charity shops throughout England braced themselves for a surge of donations now they are officially allowed to reopen this April.

With that in mind, before you make plans to race down to your local charity shop with heaps of unwanted clothing now they reopen, charity shop bosses asked the public to “be thoughtful about the sorts of things you're donating.” Stores were overwhelmed with donations accumulated during the first lockdown. Per Third Sector, St Barnabas Hospice was forced to stop accepting donations after it received more than 15,000 bags and boxes of donations – weighing about 50 tonnes – to its stores.

Oxfam has helpful donation guidelines on its website, urging people to ask “would someone I know buy this?” when giving away unwanted clothes.

Shoppers and donors will also have to take note of new donation rules going forward. As Love Clothes says, while COVID-19 restrictions have been relaxed, it’s important to remember that shops will have guidance on how to donate your unwanted clothing.

Per The Sun, The Charity Retail Association (CRA) says “donations should not be left outside of shop doors or in doorways” and states that “donors may be directed to donation points, such as empty shops or warehouses, instead.”

It’s also worth noting that many of the nation’s major charities accept donations via post.

Check for other options

If you’re worried about overwhelming charity shops with donations as they reopen, then it's worth checking out the Thrift+ and Farfetch collaboration. The luxury fashion platform has teamed up with the second-hand donation service to help people sell their best second hand clothing (with a huge emphasis on best). They've made it as easy as possible, with free collection and delivery, while Thrift+ manage sales, too – all you have to do is pack up the clothes. You can then donate two-thirds of the proceeds to a charity of your choice, and use the remaining amount as Farfetch credit, or just donate full proceeds to charity. “Simply order a thrift bag, fill it up and they will collect it,” the website explains.

There are plenty of other ways to support charities during the pandemic. You can still donate money, or volunteer time to talk to those who are vulnerable over the phone. Beauty Banks is also worth checking out, a very cool organisation which has made super easy for you to donate beauty products to those in need.

And, of course, one of the best ways to support charity shops is to use them now they have reopened. Signs say, they'll be more than worth waiting for. Back in June, Oxfam expected its stores to be “treasure troves” following lockdown clear-outs. “From a shopper perspective, I think that people can expect to find some really great treasures to buy, because everybody's had a lockdown clear-out, and I think that charity shops are going to be full of some really great gems that people have cleared out of their homes,” Oxfam’s Fee Gilfeather told The Telegraph.

As many of us shop online these days (especially now), charity shops also boast some really good online stores for virtual thrifters. The British Heart Foundation, Oxfam and Barnardos and Cancer Research UK all have online stores and/or Ebay and Depop pages for their pre-loved items.

What hygiene measures are charity shops taking during the pandemic?

Keen thrifters were also happy to find that clothing donations are “quarantined for 72 hours,” reports BBC. Speaking to the BBC, Vicki Burnett, senior consultant at the Charity Retail Consultancy, reassured the public that charity shops “already have great hygiene processes in their shops when it comes to sorting goods – items are washed, steamed or cleaned and this will only increase in the current situation.