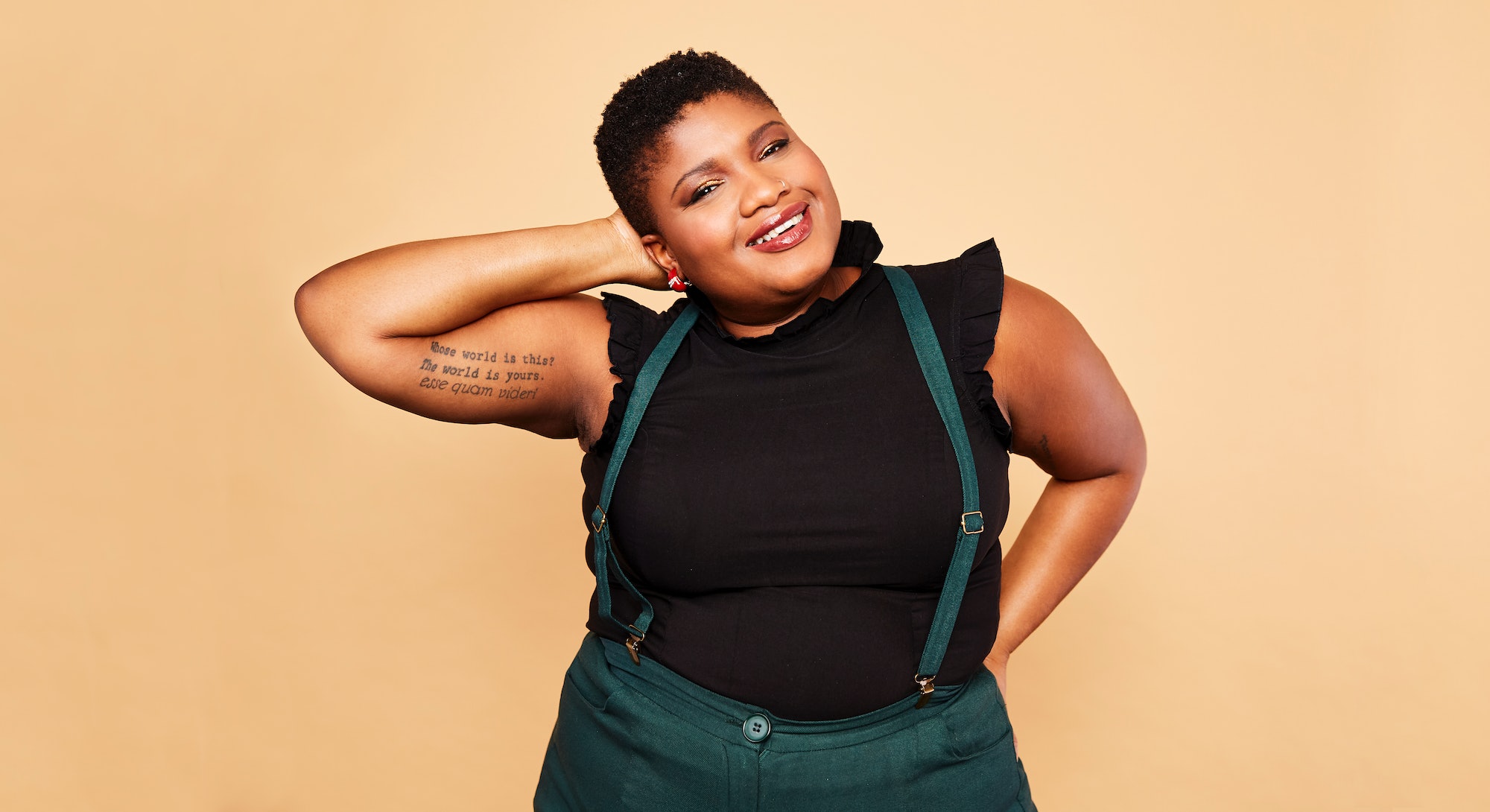 Jessamyn Stanley likes to take photos of herself in her underwear — and she wants you to see them. On her Instagram page @mynameisjessamyn, where she boasts over 400,000 followers, the 31-year-old author of Every Body Yoga regularly shares shots of herself practicing in her underwear or a form-fitting bodysuit. She also loves to show off her glorious body by posing in two-piece bikinis, body paint, and, occasionally, nothing at all. But she's not just sharing these photos for the fun of it. Stanley's presence in the yoga community as a plus size, black, queer femme is vital — and she knows it.

When the instructor first started practicing in 2011, she says no one in her classes looked like her, and they didn't dress like her either. While she believed she had to wear clothes that would cover her body, she noticed those with smaller frames were free to wear as little as they liked without judgment. That's why today she's using her body to dismantle the idea that fat figures should be hidden. "Shedding the clothing is like shedding those values," Stanley says. For her, wearing less is all about rebellion.

Stanley was born in North Carolina in the late '80s, a decade when the internet and social media had yet to take over the mainstream. Like many of her peers growing up during that time, television and magazines were what piqued her interest as a child and teenager. The only problem was that Stanley rarely ever saw anyone who looked like her in her favorite glossy or TV show.

The lack of representation during her most formative years led to her to feel as though she had to lose weight in order to fit into straight size clothing so that she, too, could be seen as desirable. The mainstream narrative that bigger bodies were attractive simply did not exist.

She says that it wasn't until she went to college when she finally started seeing a few celebrities with her figure on television. Two people in particular had a huge impact on her: musician Beth Ditto of the indie rock band Gossip and actress and comedian Mo'Nique. "Not just because they’re curvaceous people who are unapologetic about it," she says, "but they talked about the realities of fat identity that I think are very much covered up by society."

One specific topic the two role models weren't afraid to touch on was sexuality — which was eye-opening for someone like Stanley, who had long only seen skinny bodies depicted as worthy of desire. "You tend to hear [people] all the time say, 'How could anyone be attracted to [a fat person]?' she exclaims. "And it’s usually from the person who’s trying to f*ck a fat girl."

Stanley identifies as a queer femme, and remembers Ditto, in particular, always being open about her queerness in the early '00s — a time when it was still very much taboo to be anything other than straight. "That ethos coming from somebody who was confident in her fat body was huge for me," she notes. As for Mo'Nique, her role as Nikki in the UPN show The Parkers, which ran from 1999 to 2004, showed Stanley that dating as a plus size individual didn't need to be centered around weight.

Mo'Nique's character was simply depicted as an attractive black woman who dated who she wanted to date, and ended up with the love of her life by the series finale. This show, while using such a basic plot line, was revolutionary at a time when merely existing in a fat body was not viewed as even remotely acceptable, Stanley says. "I think, unfortunately, it's still revolutionary for this time too," she adds. "As much as things change and perspectives shift, there’s still a feeling of, 'Oh this is taboo, and maybe we shouldn’t go this far.'" Current TV characters — like Kate from This Is Us, who does find love, but is plagued by the traditional weight loss storyline — further her point.

But Stanley's presence is revolutionary as well. And while her initial goal when she created her Instagram page in 2012 was to get feedback on her poses from her followers, those photos ended up giving her something more. She now had the chance to examine her body from a new point of view — quite literally. "There have been so many angles that I’ve seen myself in where I’ve been like, 'Wow, I didn’t know it was OK to accept myself in this way,'" she says. "There’s certain body parts that I’ve had a real reckoning with."

Stanley admits that her arms, belly, and butt were all areas she had to learn to love during this new journey, since each of those parts had either long been scrutinized or hyper-sexualized by those around her. But by being able to look at her whole body in a variety of poses, she was able to start to peel away those negative connotations. "The angle that changed everything for me was a full frontal," she says, explaining that this position makes it nearly impossible to obscure any parts of the body. "It set a new stage to a certain degree."

The photos also helped Stanley to let go of the notion that as a plus size woman, she needed to be fully clothed in order to be accepted in the yoga community. "Really starting to understand all of this power that is held within a body that has been marginalized is really incredible," she shares. "That process to me — and it’s an ongoing experience — makes the difficulty of [learning to love your body] much more worthwhile."

So she started wearing those aforementioned sports bras, short shorts, and sometimes just her underwear when she would capture her poses in photos. And while she mentions that wearing less clothes also makes it easier for her to practice, Stanley doesn't believe that many athletic-wear brands are ready to embrace big figures wearing fewer clothes. "There’s something about fat bodies that makes designers only create clothing that has the most coverage," she explains.

Stanley also emphasizes that even for designers who do offer plus size options, it's not enough to only use a single, larger dress form to create a garment. "A size 20 can look so many different ways depending on height, depending on age, depending on where the weight rests in the body," she says. "It’s a whole thing."

But as far as the brands that are getting it right goes, Stanley sings the praises of lines like Third Love and Universal Standard — she shops from both for yoga apparel. "They do a good job of trying [the clothes] on many different shapes," she says.

It's been nearly seven years since Stanley created her Instagram page, and thankfully, the comments she receives on the app are largely positive. Still, being in the public eye in the age of social media, where everyone has a platform to share their opinion, also means she isn't immune to fatphobic remarks. However, she doesn't always believe they're all coming from a place of malicious intent — but that doesn't mean they're not damaging.

"The health problems associated with obesity have been so publicized that people think if you are fat-bodied, then fat-shaming is actually helpful," she explains. "My thought is: What is happening in your life that you are so concerned about the life of somebody else? Don’t worry about what I’m doing. Perhaps you may want to try to understand why you think there’s something wrong with the human form."

Stanley's journey is a testament to anyone who has ever struggled with loving their body that you're not obligated to subscribe to the rules others impose onto you. But she still makes it very clear that the path to self-love, especially if you're willing to share it all online, won't always be easy. "I’m very grateful that I’ve had an uphill battle and that it continues to be an uphill battle," she shares. "I needed to have that experience. I needed to feel those things about myself so I could get to where I am now." She adds that it's perfectly OK to embrace the off days as much as the days where you feel on top of the world. Just remember to embrace the journey — and maybe take more selfies in your underwear.

Hair & Makeup: Karla Hirkaler using Make Up For Ever & Amika