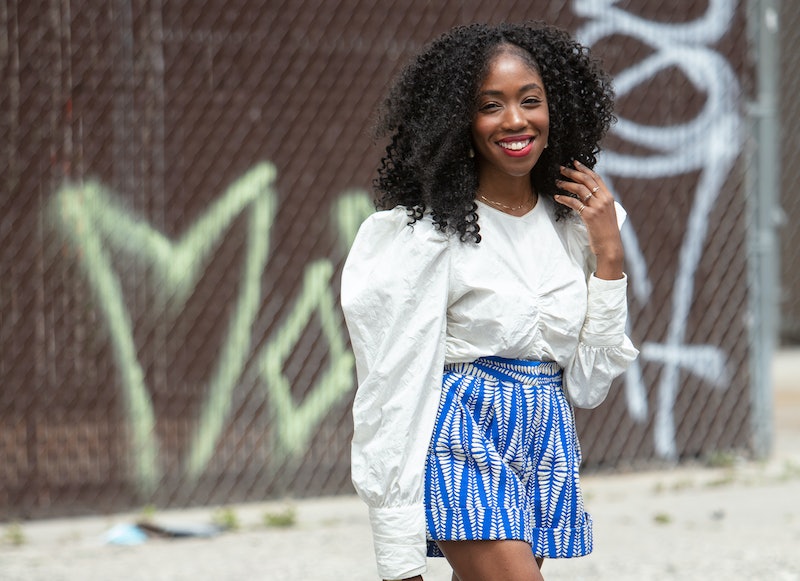 After years of capturing street style, fashion photographer Seleen Saleh decided to produce an anthology of her work, something that would act as both a tribute and time capsule of sorts. The end result is Street Culture, a vibrant collection of photographs showcasing Black people with unique, head-turning personal style.

“The inspiration behind the book was to highlight the past decade, which was a very exciting and empowering time in history when Black people were really celebrating themselves, individuality, style, culture, and natural hair,” Saleh tells Bustle. “I wanted to create something funky and inspiring that can somewhat represent us.”

She began developing the concept for the book back in November 2014, after her boss encouraged her to go for it. The process began with sifting through the thousands of images Saleh had shot throughout her career.

“Initially I edited photos to [include] my top 500 images,” she recalls. “I made contact sheets and printed them. Then I cut them up and put them together like puzzle pieces — this was a long process. It took me probably months to finalize that list.”

After completing that enormous task, Saleh started fundraising for the book, which didn’t go quite as planned. In 2016, she launched a Kickstarter that wasn’t as successful as she’d hoped.

“I spent [2017] licking my wounds from that,” she shares. “[In] 2018, I was determined to get the book published and spoke to everyone about it. It wasn’t until I met [brand consultant] Umindi Franicis, who connected me with her publisher friend. In 2019, it went into production — the rest as you say is history.”

And while you’d think launching a book during a global pandemic might prove challenging, Saleh doesn’t see it that way. “Interesting enough, it is allowing me to focus solely on my book launch,” she explains. “I am more productive now than ever. Normally I would be working my side job, doing shoots alongside my launch. Now I get to focus on my wellness and my book launch.”

The pandemic has also pushed her to explore other creative outlets. “Music has to be the most healing thing for us during this time,” Saleh says. “I’ve been doing Instagram Stories of my street style shots with music. I’ve been doing IG Lives with people from the book. It’s really fun and a great way for me to get used to transitioning from behind-the-scenes to in front of the camera.”

As a longtime street style photographer, Saleh has one-of-a-kind insight into what makes for a memorable street style look. Thinking ahead to the post-pandemic world, she predicts the street style industry will change dramatically, and she aimed to capture what it might look like in the accompanying images, featuring stylist and travel expert Nneya Richards. Like Richards, who shopped her closet for these looks, Saleh believes people will begin to embrace two key elements when crafting their everyday ensembles: simplicity and sustainability.

“I really think street style will be going back to the basics,” she says. “People will be thrifting more, and it will be more about style than clothes again. Up-cycling will be a thing, and everyone will be way more conscious about what they wear.”

As a fan of all things vintage — “Lately I have been obsessed with vintage patterned blouses,” she reveals — Saleh has a hunch that one decade in particular will have a significant resurgence in the months ahead.

“I am looking forward to the '70s coming back with pattern and color clashes,” she shares. “The patterns are so fun and funky.”

The economic effects of the pandemic — which have caused many retailers to pivot to e-commerce and others to file for bankruptcy — will, of course, also influence which garments and pieces make it to street style galleries.

“People are taking a hit financially from all this, [including] fashion houses,” Saleh says. “We will see less designers giving away tons of products to influencers and editors. More people will be conscious of the Earth, waste, and hopefully each other.”

More like this
42 Black Owned Fashion & Beauty Brands To Support Today & Always
By Mekita Rivas, Shea Simmons, Kui Mwai and Dominique Norman
30 Of Kendall Jenner’s Best Runway Looks To Date
By Dominique Norman
Looking Back At Kylie Jenner's Best Fashion Week Looks
By Allie Fasanella
All Of Doja Cat’s Wildest Paris Couture Week Looks
By Dominique Norman
Get Even More From Bustle — Sign Up For The Newsletter
From hair trends to relationship advice, our daily newsletter has everything you need to sound like a person who’s on TikTok, even if you aren’t.