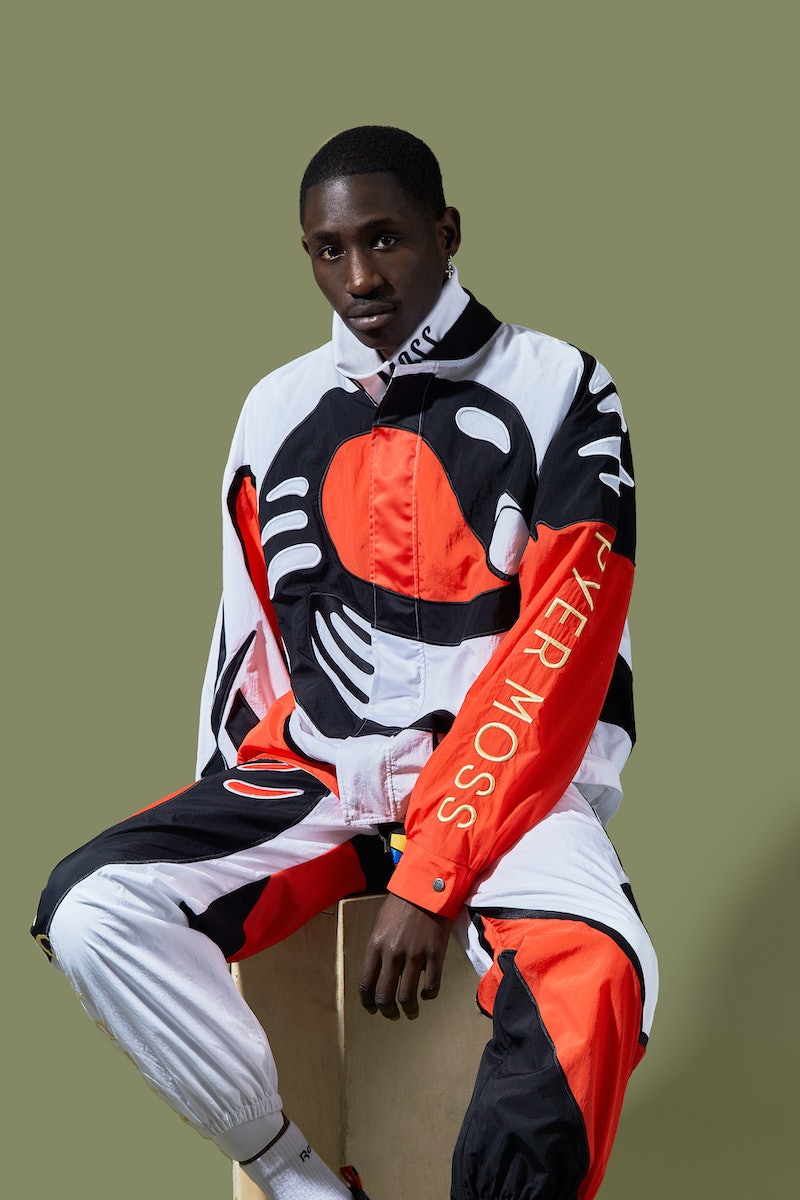 At the most recent New York Fashion Week, Pyer Moss' Kerby Jean Raymond made a lasting impression with the “American, Also” collection. The show, which was one of the most highly-anticipated of the season, featured a cast of made up exclusively of Black models who walked down the runway a gospel choir sang. Now you can have a piece of it for yourself, because the shoppable Reebok by Pyer Moss collection has finally arrived.

The first drop of the Reebok by Pyer Moss - Collection 3 will include some of the apparel, footwear, and accessory pieces showcased at the Pyer Moss fashion show in September for NYFW. A press release from Reebok explains the line comes from the concept of Sankofa, a Twi word from the Akan tribe in Ghana, which means "Go back and get it.” More specifically, it means for marginalized people to go back and reclaim what is rightfully theirs, the overall message of the “American, Also” campaign.

The phrase is represented throughout the collection with a graphic of a bird taking an egg from its back that's featured on a series of bomber jackets, beanies, joggers, and hooded sweatshirts. In the collaboration, Reebok and Pyer Moss bring together the athletic wear brand’s old school styles and Pyer Moss’s take on fashion to present unisex sportswear products that tell a unique story. Despite there being only one main graphic, Pyer Moss uses the image in various placements and colorways for a unique design pattern on every piece.

The collection will be available to shop on Reebok.com and select retailers globally starting Nov. 2. at 12 p.m. ET/9 a.m. PT. Reebok by Pyer Moss - Collection 3: Second Offering will drop on Dec. 14. The line, which starts at $20, will be available in sizes 2XS - XL in apparel and sizes 7-13 in shoes. Here are just some of the best picks.

This graphic bodysuit from Pyer Moss is 85% recycled polyester. It has the Pyer Moss logo peeking out from the right with the Sankofa figure cut off on the left. Plus, there's a back zipper for easy removal.

One iconic piece seen on the Pyer Moss runway was this sporty maxi skirt. The skirt has a comfy elastic waistline, plus includes two side pockets to hold all your small things.

As one of the more pricer picks in the line, Reebok by Pyer Moss is also offering its iconic Experiment 4 Fury Trail sneaker that was featured on the runway. "The sneaker was designed as a sacred object split into three layers," the Reebok site description states, "Each one representing all those who climb to success through the creation of something sacred in the face of adversity."

Turtlenecks have been a trend getting some shine for a while now, and even Pyer Moss takes note of it. You can grab the crop turtleneck with the Pyer Moss logo in either this white and red shade or black and white.

The RCPM Sankofa pants (and the matching Sankofa bomber jacket) are one of the standout pieces from the Pyer Moss NYFW show that you can now buy. The pants remain consistent with a bold bird graphic on the side as well as two functional front and back pockets.

Pyer Moss isn’t finished sharing its socially conscious message with the world. But with a collection this dope, sportswear dressers will rock it loud and proud.