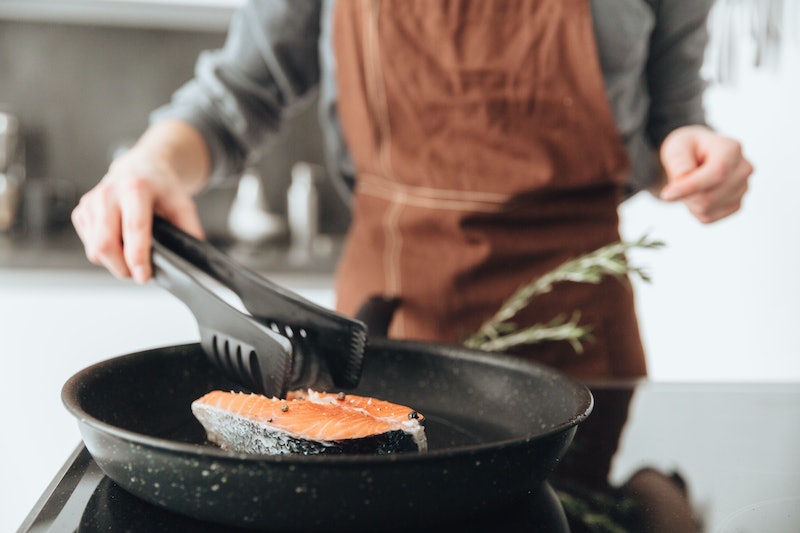 Everyone knows to stay away from cigarettes to prevent lung cancer and to keep out of the sun to avoid skin cancer. But many people don't realize that you can also attempt to fight off breast cancer through your diet. We hear about "superfoods" and "antioxidants" all the time, but we aren't always aware that it's these foods and their nutrients that can help keep us from getting diseases such as breast cancer. When discussing the disease, we often talk about yearly mammograms and performing our own breast exams but we often leave out the importance of eating a healthy diet when it comes to breast cancer prevention. Surprisingly, food can play a powerful role in fighting off tumors.

"New studies have found that eating a plant-based diet, low alcohol consumption and maintaining a healthy body weight significantly reduces the risk for breast cancer," Sarah Mirkin, RD a registered dietician and nutritionist tells Bustle over email. "Fruits, vegetables, and whole grains are high in antioxidants and phytochemicals which protect the body from cancer growth. These foods are also anti-inflammatory, which reduces cancer risk."

Next time you're trying to figure out what food to add to your grocery cart that's going to keep you as healthy as possible, try adding one of the following 10 foods that have been found to help prevent breast cancer.

Strawberries, blueberries, and blackberries are high in antioxidants, and studies on animals have found that a diet of black raspberries can reduce breast tumor volume by 60-70 percent according to the American Institute for Cancer Research.

Vegetables in this family such as broccoli, kale, Brussels sprouts, cabbage, and cauliflower can contain phytochemicals called glucosinates that activate protective enzymes in the body that help fight off cancer. According to studies, such as one done by Cornell University, exposure to estrogen is associated with a women's risk of breast cancer. The glucosinates in vegetables like broccoli and kale cause shifts in your metabolism that affect the connection between estrogen and breast cancer.

"Orange fruits and vegetables rich in beta-carotene, which is an antioxidant, may protect cell membranes from toxin damage and slow the growth of cancer cells," says Mirkin.

Foods that contain this carotenoid like sweet potatoes and squash have been linked to a lower risk of getting breast cancer as well as a greater likelihood of breast-cancer survival,

Studies have found that apples can decrease the size of tumors along with the amount and growth rate in animals, according to a Cornell University study. Like berries, apples contain antioxidants that fight free radicals that could potentially harm your cells and cause cancer. But it's not just the fruit of the apple that's beneficial — the skin contains quercitin, an anti-inflammatory flavonoid that can help prevent and fight against breast cancer tumors, according to a study published in the Journal of Experimental and Therapeutic Medicine.

Fatty fish is high in omega-3 fatty acids, which help reduce inflammation in the body, according to WebMD. "Studies suggest inflammation is linked to breast cancer," says Mirkin.

A study published in Breast Cancer Research found that women who consume high amounts of omega-3 fatty acids from fish have a lowered risk of breast cancer, so load up on fish such as salmon, tuna, and sardines to receive their benefits.

Garlic has long been used as a natural remedy for fighting off sickness and disease, and can play a role in cancer-prevention as well. "Garlic's active ingredients allicin and the enzyme allinase have strong antioxidant properties," says Mirkin.

Population studies have found that people who eat more garlic have a significantly reduced risk of breast cancer, and one study published in the European Journal of Epidemiology reported that the effect is even more powerful when garlic is combined with fiber-filled foods and onions.

Eating the orange spice can not only help prevent the cancer, but inhibit growth of existing tumors.

"Walnuts contain disease-fighting omega-3 fatty acids as well as phytosterols that have been shown to prevent breast cancer and stop tumor growth," says Mirkin. "Phytosterols bind to estrogen receptors to slow the growth of breast cancer."

Olive oil is a great source of various antioxidants and phytonutrients. Oleic acid, a fatty acid prsent in olive oil, has been found to inhibit cancer cell growth, and oleocanthal, a compound found in the oil, can kill cancer cells in as fast as 30 minutes, according to an article published in the Journal of Cellular & Molecular Oncology.

More like this
Rachel Zegler Reveals She Had Breast Cancer Scare
By Radhika Menon
This Psychological Effect Might Be Keeping You From Hitting Your Goals
By Lexi Inks
10 Pumpkin Recipes That Are Way More Creative Than Pie & Lattes
By Rebecca Deczynski and Alexis Morillo
On TikTok, Tinned Fish Date Night Is The Latest Viral Food Obsession
By Emma Carey
Get Even More From Bustle — Sign Up For The Newsletter