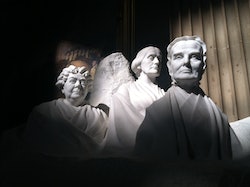 When the United States declared its independence from Great Britain, it stated "all men are created equal." While even that statement didn't hold in the new nation (men of color and men who didn't own property lacked voting rights), women were patently dismissed from the full rights of American citizenship. Therefore, Aug. 26, 1920 — the day when the 19th Amendment, which gave women the right to vote, was formally adopted — marked a significant step towards righting that wrong. On Wednesday, August 26, we celebrate this moment when U.S. women secured voting rights with National Women's Equality Day.

One of the first major efforts towards U.S. women's suffrage began well before the 19th Amendment was adopted in 1920 — it was 1848's Seneca Falls Convention. In a meeting organized by soon-to-be-famous suffragists Elizabeth Cady Stanton and Lucretia Mott, both women and men came together to devise a plan for electoral equality.

Now, after a long fight for the vote, the American people have continued to unite in the name of progress, specifically toward another first in a similar political vein: the first woman to be a major party's presidential nominee. Women's rights movements have taken many forms since the meeting at Seneca Falls, and there's still a lot to do. There are still major gender discrepancies when it comes to equal pay, women's health, and paid maternity leave — just to name a few. Yet, like these words from American suffragists, it started with small seeds of motivation and inspired a movement that would dramatically alter our democracy for the better:

2. "Every great dream begins with a dreamer. Always remember, you have within you the strength, the patience, and the passion to reach for the stars to change the world."

3. "I grew up like a neglected weed, ignorant of liberty, having no experience of it."

4. "The best protection any woman can have... is courage."

5. "If women want any rights more than they's got, why don't they just take them, and not be talking about it."

7. “If Congress refuse to listen to and grant what women ask, there is but one course left then to pursue. What is there left for women to do but to become the mothers of the future government?”

8. “People say, what is the sense of our small effort? They cannot see that we must lay one brick at a time, take one step at a time. A pebble cast into a pond causes ripples that spread in all directions. Each one of our thoughts, words and deeds is like that. No one has a right to sit down and feel hopeless. There is too much work to do.”

9. "Men and women are like right and left hands; it doesn't make sense not to use both."

10. "I never doubted that equal rights was the right direction. Most reforms, most problems are complicated. But to me there is nothing complicated about ordinary equality."

11. "While most girls run away from home to marry, I ran away to teach."

12. "What becomes a crime deserving capital punishment when the tables are turned is a matter of small moment when the negro woman is the accusing party."

14. "Woman is learning for herself that not self-sacrifice, but self development, is her first duty in life; and this, not primarily for the sake of others but that she may become fully herself."

17. "I know nothing of man's rights, or woman's rights; human rights are all that I recognize."

18. "The world has never yet seen a truly great and virtuous nation because in the degradation of woman the very fountains of life are poisoned at their source."

19. "Any great change must expect opposition, because it shakes the very foundation of privilege."

This article was originally published on Aug. 26, 2016