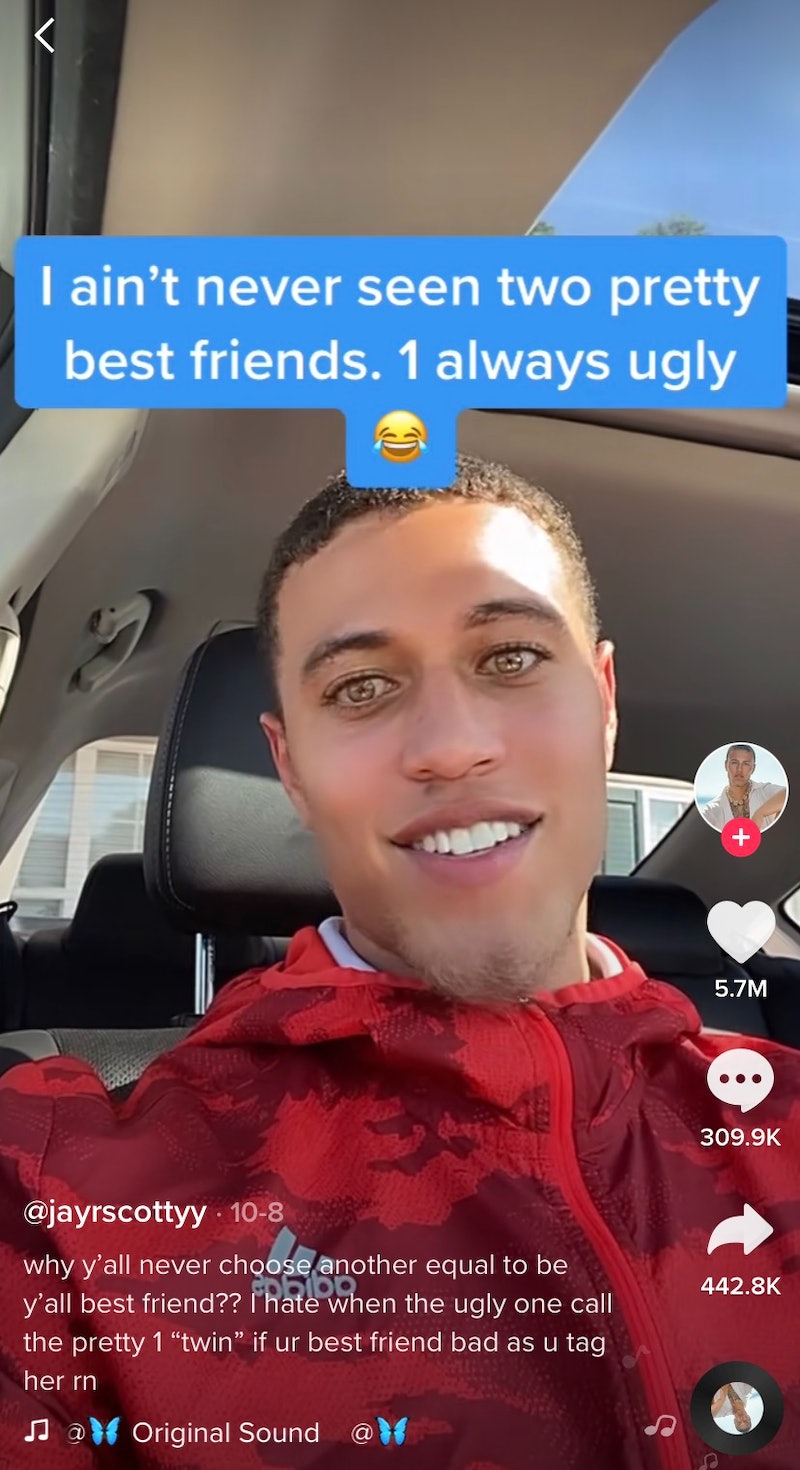 You may have noticed that your For You Page on TikTok is littered with videos that share a new, mysterious, and somewhat rude soundbite, now known as the “two pretty best friends” meme. The original audio comes from a video that TikTok user @jayrscottyy uploaded on Oct. 8, which has nearly 6 million likes. In the original, the user says, “I ain’t never seen two pretty best friends. It's always one of them gotta be ugly.” There’s nothing that special about about it (except maybe the fact that the speaker doesn't blink once throughout the five-second clip) — it’s just provocative musing from a social media influencer who has almost 900,000 followers on TikTok.

Users have since adopted the audio from the video to portray a variety of absurd scenes — catapulting it into meme status with over 50,000 videos currently using the sound. While many of the memes are joking about the original poster, some users are using it to compare cars, pumpkins, cookies, workouts, or psychology methods. In other videos, the phrase "I ain't never seen two pretty best friends" is the joke unto itself.

TikToker Dani, 30, tells Bustle that TikTok's reaction to the original video is basically poetic justice. “A guy tried to dunk on 'ugly' women, only to end up getting roasted by all of TikTok," she says. "It’s instant internet karma — don’t dish it out if you can’t take it."

A quick cruise through the #iaintneverseentwoprettybestfriends hashtag, with nearly 90 million views, and you’ll unearth another manifestation of the meme: Rickrolling. At first, these clips appear to feature an unrelated scene, with an different audio, like a rocket taking off, or a girl opening a pickle jar, but where the rocket lands and what’s in the pickle jar is always @jayrscottyy’s face — a classic (and infuriating) bait and switch.

Another kind of video starts off with the user talking about something unrelated — say, 2020 election predictions, or how to say "I love you" in a foreign language — where some version of "I ain't never seen two pretty best friends" becomes the punchline. And of course, there are hundreds of videos of pretty best friends lip syncing to the audio, refuting its very premise.

If you're over the nonsensical joke and want this sound bite off your For You Page, stop interacting with the videos that use it — and if you can't get enough of the comparisons, just keep scrolling.

More like this
What Does POV Mean On TikTok? The Popular Acronym, Explained
By Emma Carey
Here’s How To Get Verified On TikTok
By Emma Carey
RushTok 2022 Is Here & TikTok Is Just As Obsessed As Last Year
By Sarah Ellis
This Creepy TikTok Trend Encourages Out-Of-Body Experiences
By Kaitlyn Wylde
Get Even More From Bustle — Sign Up For The Newsletter