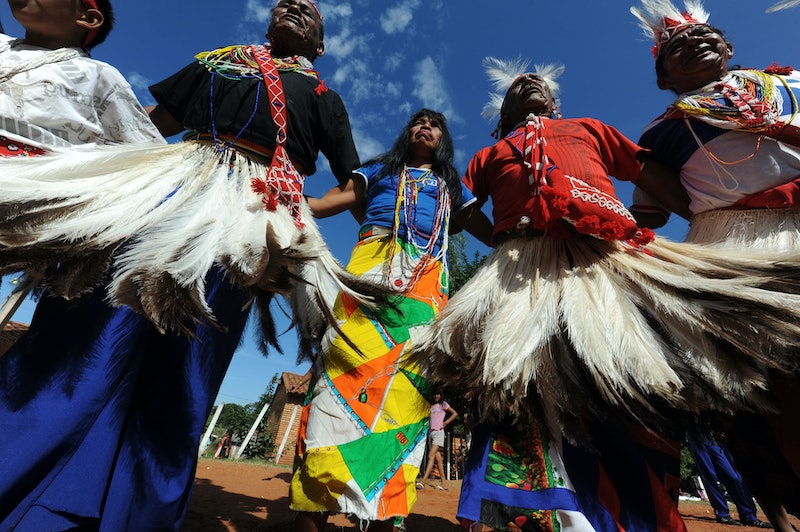 Columbus Day was designated a holiday in 1934 by President Franklin Delano Roosevelt to commemorate the “discovery” of the Americas. But it’s now widely known that Columbus’ exploration of the Americas led to widespread violence against indigenous peoples. Between Columbus’ arrival in 1492 and the Pilgrims’ arrival in 1620, an estimated one-third to 90% of the Native American population died from European-borne diseases. Still today, native people across what’s now the United States, Canada, and Central and South America face discrimination directly related to the treatment of their ancestors. Celebrating Indigenous Peoples Day in lieu of Columbus Day is just a small step towards making amends for the treatment of Native people in this country, but it’s an important one.

Here are five ways you can celebrate Indigenous people on Indigenous Peoples Day.

More like this
23 Super Sweet Things To Write In A Valentine's Day Card
By Karen Belz and Lexi Inks
25 Inspiring Quotes From Black Women To Celebrate Black History Month
By Kyli Rodriguez-Cayro and JR Thorpe
19 Instagram Captions For Celebrating Black History Month
By Ayana Lage
15 Black-Owned Liquor & Wine Brands To Add To Your Bar Cart
By Alexis Morillo
Get Even More From Bustle — Sign Up For The Newsletter
From hair trends to relationship advice, our daily newsletter has everything you need to sound like a person who’s on TikTok, even if you aren’t.

This article was originally published on Oct. 5, 2017