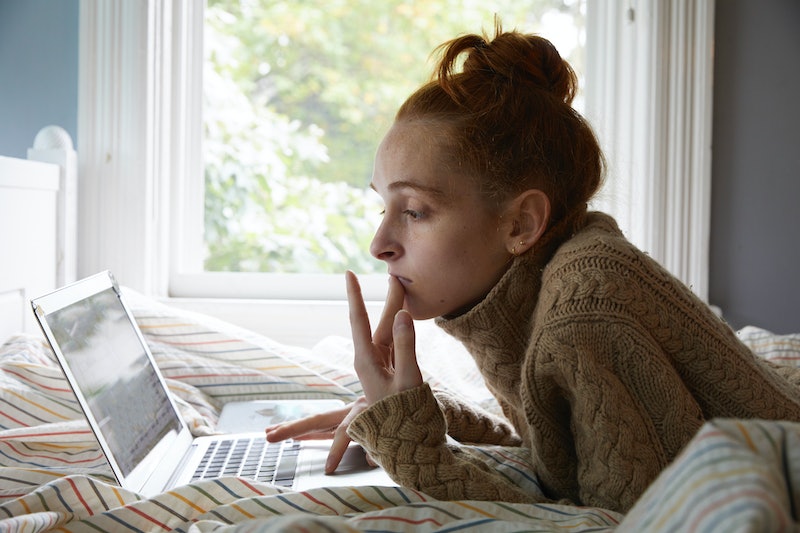 Filters, Facetune, and other image-altering apps seem to come part and parcel with selfie-taking on social media in today's world. With many photos apps giving people the ability to erase so-called "flaws" such as stretch marks, acne, and even changing body type, it may come as no surprise that young women feel increasingly pressured to look perfect in photos they share online. Yet, a worrying new survey has revealed that girls as young as 11 regularly use apps or filters when taking photos to "look better online" and 33% would delete a selfie if it didn't gain enough likes or positive attention.

The report, published by charity Girlguilding, highlighted that two out of five of the young women surveyed "feel upset" that they can’t look like the way they do online.

Between influencer culture and social media adverts, more than half of the girls said they have seen ads that have made them "feel pressured to look different" — and this figure is higher for girls who identify as LGBTQ.

The findings also revealed girls from Black, Asian, and Minority backgrounds are "more likely" than their white peers not to use social media "because of fear of criticism of their bodies."

As part of their 2020 survey, which spoke to more than 2,000 young women aged 11-21, the organisation is calling out the apps, filters, and online adverts that "knock girls' confidence."

They believe the pressure to be perfect has been "exacerbated" during the lockdown, where increasing time spent online has meant more "exposure to unrealistic images of girls and young women."

Girlguiding Advocate Panel member Alice, said in the report, "The 'perfect' images girls are encountering in their daily lives is having a devastating impact on girls' self-esteem and confidence, which not only negatively impacts their wellbeing but adds to pressures they already face in their lives."

The 15 year old explained that perfected images online are giving her generation an unrealistic expectation of what they should like. “These enhanced images create a false society where how girls look is perceived to be the most important aspect about them," she added. "It prevents them from being able to be themselves or feels confident to do the things they want to, now and potentially in the future, and with the increased time spent online during the lockdown, this could get much worse.”

It seems the majority of the girls surveyed agree and 71% feel that the media and influencers on social media need to do more to stop reinforcing gender stereotypes. The women surveyed also agree with banning weight loss adverts for those under 18, as well as ensuring the legal age for botox and lip fillers is 18.

With all this in mind, Girlguiding has stressed the need for young women to "access to tools to build resilience and confidence."

Girlguiding Chief Executive, Angela Salt OBE said: “Our new research highlights the concerning amount of pressure faced by girls and young women on a daily basis. Exacerbated by lockdown and the surrounding uncertainty of their futures, it is imperative we continue to support their wellbeing and help build resilience and confidence."