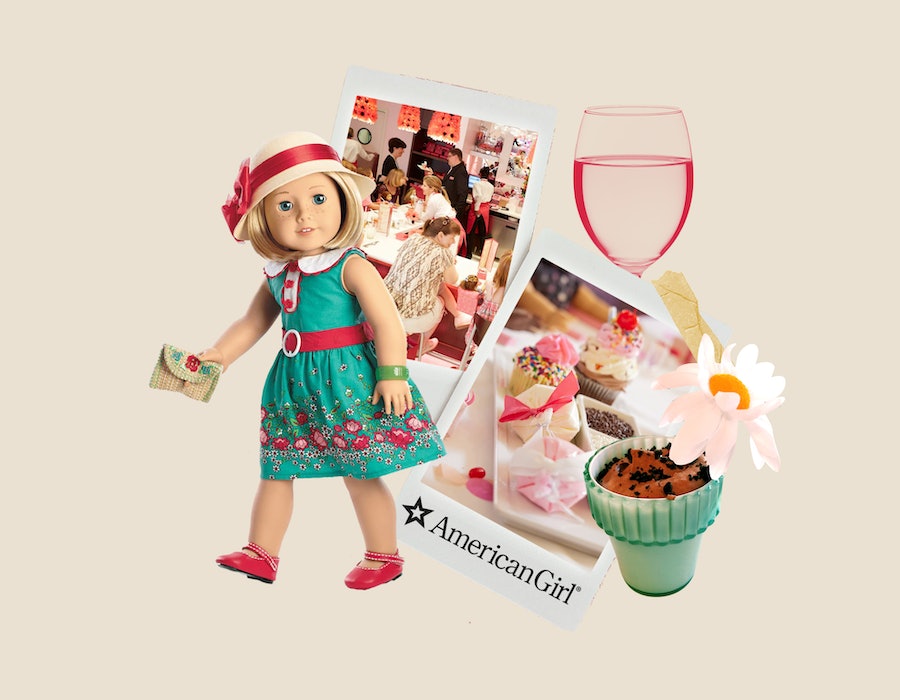 Christmas of 2000 was when it all began for me. I was 5, with a fresh bob cut due to an unfortunate run-in with a roll of Hubba Bubba Bubble Tape, when I descended the back stairs of our suburban Georgia home to a spread of presents packaged in purple and red. Santa had brought Kit Kittredge, the outspoken Historical American Girl emblematic of the depression era, complete with a rickety trundle bed and blonde bob to match my kindergarten-era aesthetic.

Kit quickly became my constant companion, my plus-one to every elementary sleepover. She was a mainstay in my family dynamic for the better part of the early aughts, once even the subject of a devastated phone call to a Dublin-area hotel when my dad left her sitting on the bed at the end of a family trip. While the time eventually came when I left my age of girlhood behind, every once in a while, a conversation with a friend will venture to our American Girl days, and we’ll reminisce about our dolls and what they meant to us.

Now nearly 27, I’ve found that a recent wave of cultural nostalgia online has brought with it a new age of American Girl for the original generation. Some create memes pondering who the dolls grew up to become (Kit apparently snuck into the polls at 17 to vote for FDR in the 1940 election), while others have unearthed the street cred that comes with owning one of the now-retired dolls like Molly or Felicity. Make no mistake: this American Girl renaissance is not driven by the brand itself, but rather by the memories of the generation that helped it rise to prominence in the first place.

Once the depths of TikTok caught wind that certain store locations possessed liquor licenses in January 2022 — namely New York City and Los Angeles’ American Girl Cafes — the intrigue of sharing a mimosa with your Samantha doll became too much for the millennial and gen-Z cusp generation to let slip by. So, I did what any rational adult woman would do: I called my friends together for brunch at the American Girl Cafe and made dressing like one of the historical dolls a requirement for entry.

Reader, if you think I had my Kit doll on hand in my apartment for this endeavor, of course not — I am an almost-27-year-old with a full-time job and rent to pay. But I’m not too proud to express the depths of my disappointment when my mom refused to claim my doll from storage and overnight her to me for the sake of the bit.

However, the stars amply aligned when our group arrived at the cafe of the American Girl Store. Spread before us at the entrance was a wall of dolls to choose from if you failed to bring your own. After a lengthy discussion of whether we wanted to choose one of the newer dolls from after our time, collectively, we decided Josefina, the 1824 Latina historical doll from New Mexico, would be the fifth member of our party (because she was the coolest OG doll with hoop earrings and a pet goat, obviously).

As a collective of women nowhere near an era of parenthood that would make this locale traditionally age-appropriate, I was surprised by how genuinely excited my friends and I were to be there for lunch, Josefina in tow (though, with a $27 three-course menu in the heart of Midtown Manhattan, you could hardly blame us — that is tough to beat). It was also unexpected to see that we were not the sole adult-only party there. While there were plenty of mommy-daughter dates and birthday parties in the mix, there were also many women like us, teasingly marveling at the ambiance of the dining experience.

To say the American Girl Cafe is curated to perfection is the understatement of the century. As we sat down, my friends noted that the lighting was impressive — sunny and cheerful, a grand feat in a restaurant situated in the windowless basement of a Manhattan high-rise.

Bright whites accented by punchy pinks and purples paint the space in a way that seems to cater to multiple audiences. Sure, the palette is the classic colorway of a preteen bedroom, complete with hot pink upholstery on the booths. However, the execution — from the white petalled wainscoting on the ceilings to the abstract floral murals peppered throughout — read more like a trendy cafe, down to the fake vines climbing nearby pillars.

I won’t say this was a shock. After all, American Girl founder Pleasant Rowland used her success to transform her quiet Upstate New York college town of Aurora into a beautifully chic, yet colorful getaway beginning in 2001, but seeing this in action at the heart of the company’s brick-and-mortar was brilliant.

Thankfully, everyone honored my dress code, with my friend Katie and I idolizing the psychedelic charm of 1970s doll Julie, and accidentally matching the decor to a T while we were at it. Meanwhile, our other friends Kathryn and (also) Katie emulated their childhood American Girls, Kit and Elizabeth, respectively, with floral sundresses reminiscent of outfits they once had for their dolls.

The menu itself — a three-course prix fixe — beautifully navigated the line between kid-friendly and adult-appropriate. For every “fancy” bowtie pasta and chicken finger dish, there was a Cobb salad or a club sandwich with sweet potato fries. The appetizer spread was all the appeal of a nice charcuterie without venturing too far beyond cheddar cubes and hummus with carrot sticks. And might I say, starting the meal with a mini cinnamon bun and ending it with a chocolate mousse was among one of the most pleasant ways I’ve ever rounded out a Saturday brunch.

And what would this experience be without sampling the infamous drink selection? The house wines were excellent, frankly better than any of us expected: among our group, we ordered the brut, the rosé, and a mimosa (fresh OJ included), all of which were delicious.

While the appeal of pouring a little brut into the mini mug provided for Josefina was a rather short-lived bit, my friends and I found ourselves genuinely enjoying our time at the cafe. Standard brunch conversations still ensued, but others about our elementary years and our American Girl Dolls’ roles in them inevitably followed. We even pondered what it would take to rent out the space after store hours for the sake of a “Nostalgia Night” Happy Hour for other women to join in on the fun.

Once we finished our meals, we wandered through the store displays for a couple more moments of reminiscence, freaking out over various doll accessories — like Julie’s pinball machine — as if we were 10 again, flipping through the pages of the American Girl catalog. After snapping a few pics, we departed for our next locale, chatting the whole way about how a silly afternoon activity turned into such a fun experience. That’s the power of nostalgia — amid workweeks and deadlines and boozy brunches on the weekends, it was lovely to revert back to a more wholesome time of girlhood, even if just for an afternoon.