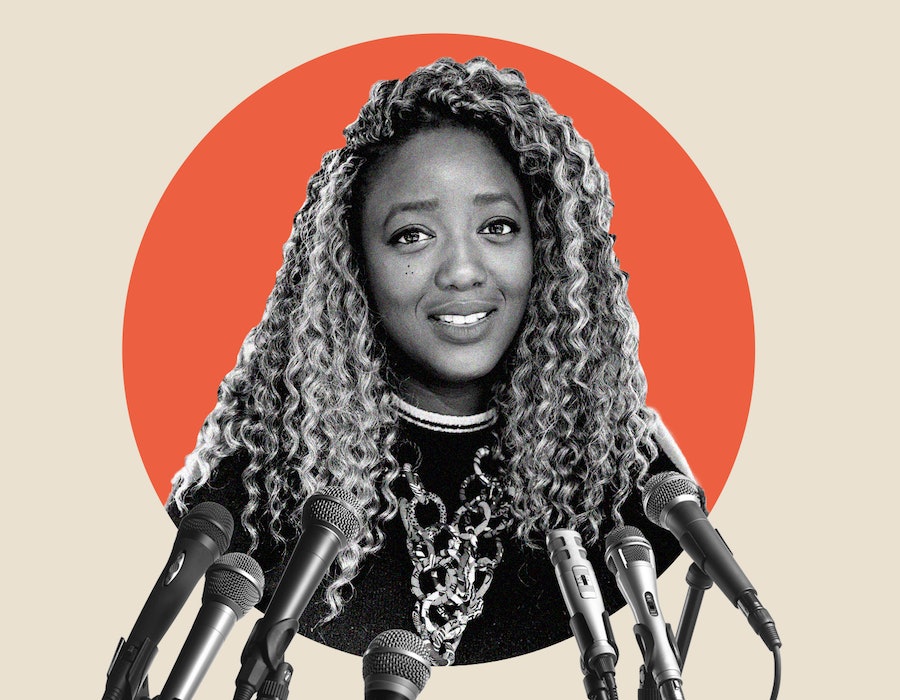 In Bustle's Quick Question, we ask women leaders all about advice — from the best guidance they've ever gotten to what they're still figuring out. Here, Dr. Anne-Marie Imafidon, mathematician, computer scientist, and co-founder of Stemettes tells Bustle about her love for STEM, her work with young girls, and advice that has helped her along the way.

While most of the world was struggling to adjust to stay-at-home orders in March, British mathematician Anne-Marie Imafidon was already settled into her year of JOMO (Joy Of Missing Out). Imafidon, who's the co-founder of Stemettes, a mentoring program that encourages girls to practice mathematics, science, and computing through fun and free activities, had planned to spend 2020 staying home and develop initiatives for young women and girls in STEM. During lockdown, she ran a series of online events — Instagram Lives, YouTube Lives, and a role model Q&A — before launching a virtual summer school.

It's no surprise Imafidon, 30, went into a career in STEM. Imafidon is a recognized prodigy — she was the youngest girl in Britain to get an A-Level qualification (it's equivalent to SAT) in computing at the age of 11 and was off to the University of Oxford at 17. Growing up, she'd take apart pens, DVD players, and motherboards just to figure out how they worked.

"I saw math as a creative outlet," Imafidon tells Bustle. "I don't draw or write poetry, but I can make something using technology. It's what I've always enjoyed about it, and it's what's kept me going. Even if I'm in an all-male environment, often I don't notice, because I'm there making something that I think's cool and that's really the most important thing." Imafidon wants the young girls she works with to feel the same way.

Below, Imafidon shares advice that's stood out to her, why she's so passionate about encouraging girls, and words of wisdom to young women pursuing STEM.

Why have you focused on young girls and young women in your career?

AMI: In many ways, it's their formative years. When you're an adult, you have hangups, baggage, and a predetermined view of the world. It's harder to convince adults that they can do math. But young people are still forming their views of themselves and we can help them broaden their perspective.

There's a lot of people who avoid working with children because it's hard. It's something we've been able to develop and do well through Stemettes, where we know we have an impact. We know we're making the connection and that they're having a positive technical experience.

AMI: I don't think any advice is bad, because it's from that person's perspective. So if it didn't work for me, it's not their fault, it just means I was in a completely different scenario in a different time.

Don't wait until you're the big boss before you start to change the things around you, because by then it won't have been a habit.

AMI: You've got more agency and more power than you realize. Don't wait until you're the big boss before you start to change the things around you, because by then it won't have been a habit.

Also, one of my old bosses said to me, "People are messy." When you leave college, you realize that in life, it's not only about your mathematical ability. You learn how important it is to communicate with other people and to work on a team. If I see a team member on Tuesday morning and say hello and then get a completely different response on Wednesday morning, I don't know what's going on with them on a personal level, but I still have to be able to work with that person. People are not algorithms or computers. As humans, we're more complicated than that, so you just have to learn to roll with it.

What's your advice for young women in STEM?

AMI: Seek forgiveness, not permission. The person who told you no probably didn't know that what you're trying to achieve is possible, or probably doesn't care enough or believe in you. So do what you want to do anyway. I also like to tell young women that they're made of "gold dust" [to emphasize that they're one-of-a-kind] and that there are people out there who will recognize them for their talents. Even if they don't do well in one interview or don't get hired by that one company, there are people out there that want them for their skills.

Editor's Note: This story was updated from it's original version on September 2, 2020.

More like this
Chelsea Clinton On The Best Advice She Ever Got From Her Mom
By Brianna Kovan
26 Ghost Story Podcasts To Get You Ready For Halloween
By Jessica Booth, Mia Mercado, JR Thorpe and Emma Carey
20 Smart Devices Under $35 That’ll Change The Entire Vibe Of Your Home
By Emma Carey
Here's How To Get Your iPhone To Update Automatically Forever
By Emma Carey
Get Even More From Bustle — Sign Up For The Newsletter