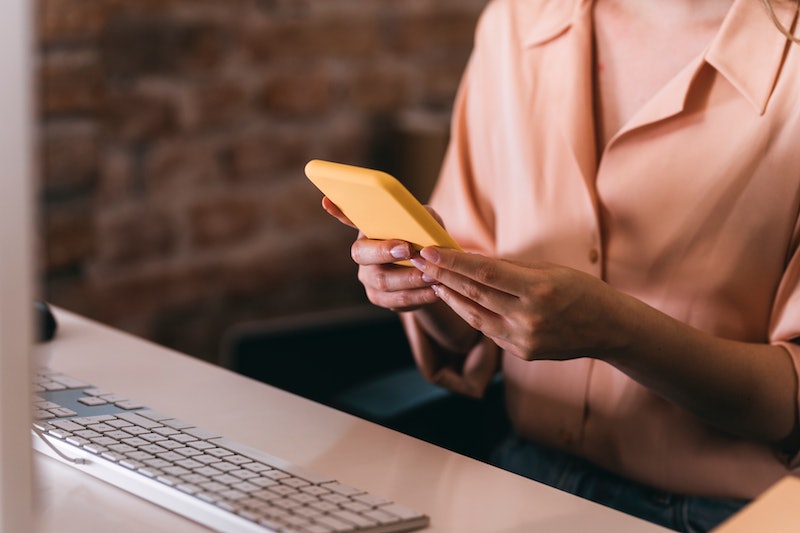 At a quick glance, you might think the pastel-hued Instagram posts — often in bridesmaid font, or one of its close relations — are just inspirational quotes, the kind that are easily shared to Story or Pinned. But when you train your eyes on your feed, you’ll see they actually spout a fallacious warning: as mandated masking policies increase to curb the spread of COVID-19, they claim, the United States is likely to see an uptick in child sex trafficking. They insist that traffickers kidnap their victims; that mask-wearing makes a child unrecognizable and thus vulnerable to exploitation; that if you care about the human trafficking crisis, you should be firmly against mandatory mask policies.

Ayana Lage first noticed a version of this inaccurate narrative circulating in mid-June, when Instagram influencers were calling for the boycott of online homegoods store Wayfair. (Lage has previously been employed by Bustle Digital Group.) An unfounded conspiracy theory alleging that the retailer was secretly trafficking children by shipping them in astronomically expensive containers was racing through the social network. These posts were often couched, Lage says, “in the verbiage that if you’re posting about Black Lives Matter and not this Wayfair situation, you’re an awful person.”

In July, Wayfair told BuzzFeed that "there is, of course, no truth to these claims." Bustle has reached out to Wayfair for comment and will update this post when we receive a response.

Lage, an influencer with over 55,000 followers, started debunking the conspiracy and breaking down its ties to QAnon, a network of far-right conspiracy theories centered on the false idea that Democrats are running child sex trafficking rings, which is the original source of the allegations. She used her Stories to explain how the anti-trafficking movement had been appropriated to distract from unrest around racial justice. “People started DM’ing me, saying, ‘So, you support pedophilia then.’ And the answer is obviously not.”

How Anti-Mask & Anti-Trafficking Messages Spread To Your Instagram Feed

On Instagram, over 650,000 posts are hashtagged with #savethechildren, a social media shorthand for QAnon-linked beliefs. (The hashtag was once connected with the legitimate charity Save The Children, which clarified on Twitter on Aug. 9 that it has no affiliation with the conspiracy theory.) On Facebook, interactions on posts with the hashtag have gone up over 500% since early July, according to The New York Times. The viral potential of the current presidential administration may also be feeding the frenzy. After President Donald Trump, his daughter Ivanka Trump, and Fox News all posted about an administration-funded $35 million grant for trafficking survivors in early August, those three posts garnered over 700,000 combined interactions on Facebook, as Kevin Roose, a tech reporter for the Times, noted on Twitter.

But how do these memes get onto your feed? Lauren Pinkston, PhD, an assistant professor of business as mission at Lipscomb University in Tennessee, says that QAnon targets language towards young mothers, specifically those who have experienced vaccine injuries and already feel on the “outside” of mainstream thought when it comes to their parenting. “I have not seen any designed research on this, but my own observation within the social media space is that influencers who are also advocates for the anti-vaccine movement have been drawn to QAnon theories.” Both the Wayfair conspiracy and the anti-mask link to child trafficking are verbatim QAnon talking points, she says. By targeting parenting influencers already susceptible to anti-vaxxer talking points through concerns about child safety, QAnon theories are able to reach a larger, broader, and more generalized influencer base.

Pinkston says she sees many people in her own circles — both and online and off — following the content coming out of QAnon and Instagram accounts they’d likely target. “I see a very consistent theme in trying to tie all of the life-leaning political stances to ... being anti-human trafficking or in opposition to Black Lives Matter or the opposition of wearing masks. There is a lot of danger in trying to connect three very different issues.”

Pinkston is concerned about these memes as both an academic with expertise in anti-trafficking work — she conducted field research on human trafficking as part of her doctorate — and as the face of a popular Instagram account, @upwardlydependent, with 14,000 followers who look to her for faith-based perspectives on everything from parenting to social justice. “The more we put misinformation in front of our faces, the more we will believe it,” she says.

“This is a very emotional topic, and it has a tendency to be sensationalized,” says Lucy McCray, director of strategy at The Freedom Story, an anti-trafficking organization working in southeast Asia. “It can make it difficult for those of us trying to share facts that are less emotionally compelling, but are true, because people have already bought into a different narrative without realizing it may not be accurate.”

For the record, McCray says, she has “no concerns about masking increasing child trafficking anywhere in the world.” Statistics from the National Human Trafficking Hotline show that traffickers very rarely kidnap their victims; that people are “almost always” trafficked by someone known to them, or someone who’s begun a relationship with them for the purpose of trafficking; and that victims are often manipulated or threatened into staying in their place of exploitation. Further, while McCray says that the COVID-19 pandemic “absolutely will increase trafficking,” the uptick will be due to increased poverty and vulnerability, not mask-wearing.

Lage says influencers using their reach to share actual, factual human trafficking resources is critical. “I try to always point people towards [those] who are doing this work, so people can hear how human trafficking really happens and what it really looks like ... People find those resources helpful and it’s better than just redirecting to another fear-mongering meme.”

More like this
Ashamed Of Your Screen Time Stats? Here's How To Change That
By Alexis Morillo
How To Turn Off TikTok Profile Views So You Can Stalk Other Accounts In Secret
By Alexis Morillo
Watch Jacinda Arden’s Devastatingly Honest Resignation Speech
By Sam Ramsden
This Wordle Rival Is Taking Social Media By Storm
By Sam Ramsden
Get Even More From Bustle — Sign Up For The Newsletter
From hair trends to relationship advice, our daily newsletter has everything you need to sound like a person who’s on TikTok, even if you aren’t.