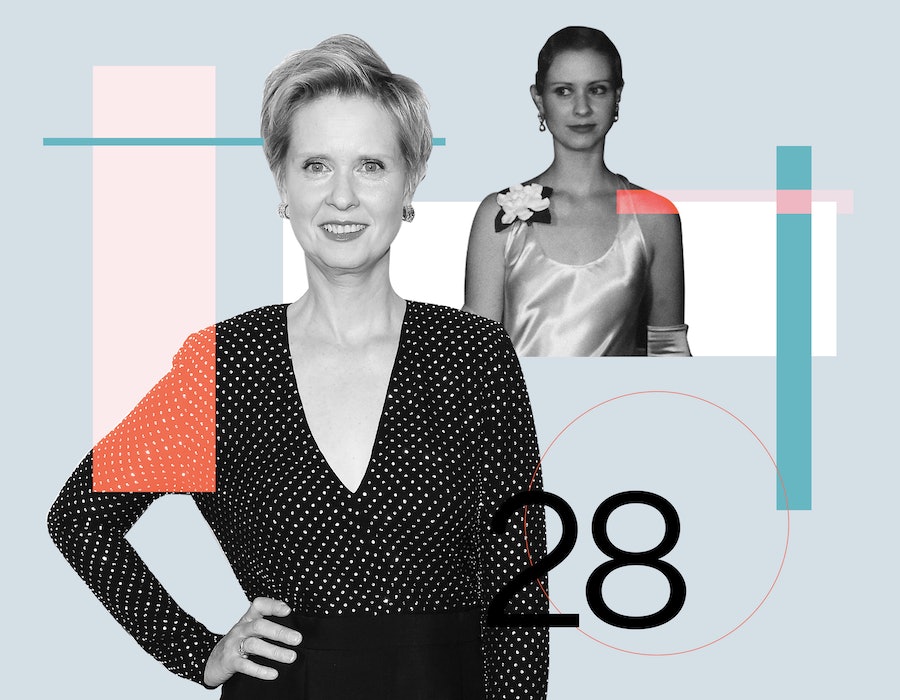 In Bustle’s Q&A series 28, successful women describe exactly what their lives looked like when they were 28 — what they wore, where they worked, what stressed them out most, and what, if anything, they would do differently.

When I call Cynthia Nixon at the end of May, she asks me where and with whom I’m quarantining. We’re less than a mile apart in our corners of New York, and we’re both fed up with social distancing. “If you're doing it, you know what it's like,” she says, conspiratorially.

It would be a week before the country exploded in protest against police brutality, which the actor, activist, and former gubernatorial candidate would lend her voice to support. But when we speak, it’s just a few days after her and her wife’s first-date and wedding anniversary, which the pair marked simply by having a drink on their apartment building’s roof.

As an actor, Nixon made her name on Broadway before landing her most widely-known role as Miranda Hobbes on Sex and the City. She was later recognized as a champion of progressive causes, from marriage equality to single-payer health care, ending the school-to-prison pipeline — she and her wife, organizer Christine Marinoni, met at a protest against school budget cuts in 2001 — and more. She brought those values to her 2018 run for governor of New York, which she lost in the primary.

I’m much more direct now. The younger you can learn that skill, the better.

When I ask what, as his former opponent, she thinks of Gov. Andrew Cuomo’s coronavirus response, she takes a deep breath. “I think Governor Cuomo’s daily press conferences were very helpful and kept people informed … when there was so little leadership or information coming from our president. But I do wish that he and the mayor [Bill de Blasio] had taken a page out of the West Coast playbook and closed us down at least a week or two earlier,” adding that doing so could have affected case counts in the rest of the country. She also points to Cuomo’s plan to cut $2.5 billion from Medicaid in April. “When people are facing such a health crisis, cutting social services, medical services, and education is the absolute worst thing that we can do. And that's what we're doing,” she says. “There are so many different, creative ways to raise taxes that wouldn't make any impact on corporations and Cuomo refuses to do it.”

Though Nixon is quick to note that it's “hard to complain” about quarantining when so many others have it worse, she’s ready for it to be over. “I’m so eager to not only get back to work, but get back to my friends and be able to see them again,” she says. Social distancing stalled filming on HBO’s The Gilded Age, one of her upcoming projects, but another, Ryan Murphy’s Ratched, will premiere in September. The Netflix series delves into the backstory of One Flew Over The Cuckoo’s Nest’s Nurse Ratched, played by Sarah Paulson.

I figured myself out more last week than I ever had before.

Nearly three decades ago, however, Nixon’s life looked very different. Here, she tells Bustle about her “turning point,” her Western-inflected style, and what being 28 taught her about growing up.

Tell me what your life was like at age 28.

Twenty-eight was an enormous turning point for me. I’d been acting since I was 12, but in my early- to mid-20s, I hit a plateau. I did all these plays, I did a movie or a TV show every so often. I imagined my life going on the same way it had been.

That was completely wrong. When I was 28, I was cast in Angels in America, which led me to be cast in another Broadway show called Indiscretions, for which I got nominated for my first Tony. I thought that was going to be the high point of my career — being nominated for this Tony I knew I wasn’t going to win.

I’d always kept my ambitions and my expectations low so as not to have my heart broken, but these roles opened a lot of doors for me. I realized that my wonderful career that I thought was fully grown was still a puppy.

What was your go-to look that year?

I was very into lip liner and chokers. I spent a lot of time drawing in my eyebrows an auburn color. I can put on makeup, but I can't do my hair to save my life. I wore a wig for Indiscretions, so my hairstylist asked, "Why don’t we do something fun with your hair?" That was when I dyed it red for the first time. When I was cast as Miranda, people remembered me with red hair and said, why don’t we do that again? I wore a lot of blazers and antique pants, long skirts, and work boots or cowboy boots.

Exactly. I think this was the same year Reality Bites came out. I especially remember a pair of old-fashioned, pointed-toe boots where you would lace them up, like somebody in the frontier days might've worn if they were dressing up to go into town.

How have you changed the most since you were 28?

Well, I've become a mother to three kids. That’s obviously enormous. I was also 28 when I founded the theatre troupe the Drama Dept. That helped me get out of my comfort zone — I thought it could be a disaster, but it could help me have more of a hand in deciding the roles or plays I’ll do. I’m still not great at being out of my comfort zone, but at least I try. I’m much more direct now. The younger you can learn that skill, the better.

Was there a point in time where you were like, yes, now I’m an adult?

I had a big head start as a child actor in terms of my career, but people didn't quite know who I was as an adult yet. I didn’t quite know. Maybe that’s just what happens when you’re in your early- to mid-20s. It’s confusing — you're supposed to be an adult but you're not sure what you're doing.

You want there to be a moment where you feel like an adult, but it’s ever-evolving. I could point to a moment where I’d “figured myself out,” but I’d only gotten to a certain level. I figured myself out more last week than I ever had before. I started meditating for the first time in my life literally yesterday. It’s not like an on-off switch, it’s like a flower opening and opening.

That makes me think about a quote you gave in 2008 that really resonates with me. You said, “In terms of sexual orientation, I don’t feel like I’ve really changed. I don’t feel like there was a hidden part of my sexuality that I wasn’t aware of.” Does that still capture how you feel about identity?

One hundred percent. There are people who've known they were gay since they were 4, and people like my wife didn't really come to terms with it until she was basically in her mid-20s. There are a lot of people like me who were more in the middle, who never bothered to explore because there was such a heavy price to be paid. But now that price is much less, and we’re more free to explore.

We were having such success in the gay rights movement at that moment. A lot of the success was in bringing along people who were not only straight, but were skeptical or worse, by saying I was born this way. You have to give me my rights because I am this type of person and that’s set in stone. A lot of the victories were based on that narrative, which may be true for a lot of queer people.

With young people now, it’s much more fluid. I feel a lot more like young people today. I don’t feel like my gender is fluid, although maybe if I understood it more I would say that it is. I'm pretty devoted to my gender, frankly, but sexual desire and sexual compatibility seems very fluid to me.

Is there a piece of advice you’d give to someone who’s 28 now?

Know that you have a little time to try things. It's a lot easier to do things in your 20s than in your 40s. If you're going to travel, try a profession, date a kind of a person you never thought you'd be brave enough to, the 20s are the time for that. Often when we don't do these things, we have to circle back to it later because it's an itch that's left unscratched.

In my 30s, I started getting more political. When I started writing and making speeches, I felt like that was a part of myself that didn't get enough attention in my 20s. Codifying what I thought about something, writing it down, and reading it to a group of people felt like an enormous rush of oxygen into my system.

What about if you could go back and say anything to your 28-year-old self?

I would tell her to be a little less Chicken Little, to try and not feel like the sky was in danger of falling at any moment. But that’s also what I’d tell my 54-year-old self. Even if you wish you could save your younger self from making mistakes, having made them and learned from them turns us into the person we are now. Without falling down, getting hurt, and healing, you’d never learn. You’d be missing the thing that came from that.

More like this
At 28, Rosie Perez Risked Her Career To Stop Playing Stereotypes
By Gabrielle Bondi
Watch Jacinda Arden’s Devastatingly Honest Resignation Speech
By Sam Ramsden
At 28, Debra Jo Rupp Was Living A Much Different '70s Show
By Grace Wehniainen
Gen Z Are Twice As Likely To Identify As Queer, According To New Data
By Sam Ramsden
Get Even More From Bustle — Sign Up For The Newsletter
From hair trends to relationship advice, our daily newsletter has everything you need to sound like a person who’s on TikTok, even if you aren’t.